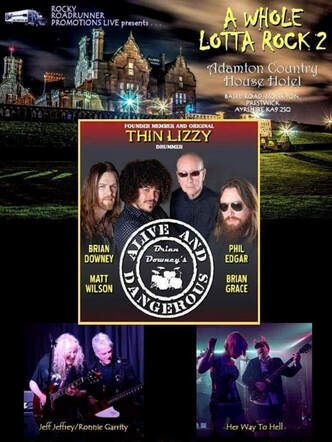 On the face of it Rattlesnake Tattoo are just another rock covers band, albeit a very good one.

Quite frankly they would probably take that but guitarist Jeff Jeffrey’s Glasgow based past of playing sessions with a veritable who’s who of Scottish artists, highly respected Ronnie Garrity’s previous (Henry Gorman Band, Eric Bell, Joe Elliot's Down 'n' Outz, The Heavy Metal Kids to name but four) and whose sinewy bass lines were a highlight of the entire night, and new Rattlesnake recruit, drummer Dave Watson, puts them above the average club / covers rock trio.

Opening with a one-two nod to the recent passing of drummer Ted McKenna (one of Scotland’s greatest ever rock musicians) by way of SAHB’s 'Midnight Moses' and Rory Gallagher’s rapid-fire classic 'Shadow Play,' Rattlesnake Tattoo’s hour of rock covers was a well performed and highly enjoyable start to the second A Whole Lotta Rock classic rock tribute event held at the Adamton Country House Hotel in South Ayrshire.

Aside from the covers, which included a beefy blues rocking take of Deep Purple’s 'Black Knight,' ZZ Top’s 'Just Got Paid' and a crunchy, power trio take of Joe Walsh’s 'Rocky Mountain Way,' three new numbers were given an airing including 'Anthony,' a clear and deliberate homage to the late and once Sensational Alex Harvey.
Jeff Jeffrey’s "Glasgow vocal" paralleled Alex Harvey’s vocal stylings on SAHB's similarly titled song but Rattlesnake Tattoo’s Anthony was a bigamist, not the S&M sinning 'St. Anthony' as portrayed by Harvey.

The wonderfully titled 'When Buffalo Bill Came to Glasgow,' featuring a repeating tribal drum pattern from Dave Watson, was another SAHB-tinged highlight of Rattlesnake Tattoo's set.

Much like Thin Lizzy (who Brian Downey's Alive and Dangerous pay such excellent musical homage to), AC/DC are the face of a much revered rock band that launched a thousand tributes, but Her Way to Hell stand out from the riff-rocking tribute crowd for a number of reasons.

First, the band are solely a Bon Scott era tribute, delivering from the High Voltage and T.N.T days through to the never-bettered for many, Highway to Hell.
Secondly, having a front woman as opposed to a front man (take a big voiced, dancing with the crowd bow, Laura McFettridge – the Bonnie Scott of the tribute world) gives the band a different dynamic but, also, an entirely welcoming vocal compliment to what is, in terms of instrumentation, a sound that is scarily close to the original.
​
While lead guitarist Derek Waters (fittingly schoolboy attired) shared the featured spotlight with Laura McFettridge and delivered the classic Angus Young Gibson SG sound 'n' solos with some aplomb, Stephen Johnston is the unheralded champion of the band, having clearly done his homework on Malcolm Young’s sound and set up (a bigger part of the classic AC/DC sound than the late and great rhythm guitarist was ever given credit for).
​
The results? Her Way to Hell Ain’t a Bad Place to Be, whether through that particular AC/DC nugget, deeper cuts such as 'Love at First Feel,' air punching, sing-a-long anthems such as 'Dirty Deeds Done Dirt Cheap' and 'T.N.T.' or the mandatory closing brace of 'Whole Lotta Rosie' and 'Highway to Hell.'

Brian Downey’s Alive and Dangerous are, similarly, a band that captures a distinct era of one of the great rock bands, but the quartet also have the back catalogue repertoire and ability to step beyond (or back before)  the Live and Dangerous era of Thin Lizzy (since their formation in 2017 the band have based their set around that classic live album, but reinstated to original set list order with a couple of Lizzy twists here and there).

This time around the highly talented band – Lynott-a-like Matt Wilson (his natural vocal tonality and phrasing is remarkably close to the late and great Phil Lynott; he can also deliver those famous, percussive styled bass lines with (Fender) precision), dual guitarists Brian Grace and Phil Edgar (how good are they on their instruments of choice? Look or listen no further than their individual solos on 'Still in Love With You') and Lizzy legend Brian Downey (who still hits the kit as hard and effectively as he did those forty+ years prior; thunderous, double-time proof of which came by way of his still powerful solo during 'Sha La La') – threw a new song, 'Gotta Figure Out,' in to the set list mix, along with an encore that featured older Lizzy gems 'Wild One' and 'Whisky in the Jar,' the latter setting up the perfect sing and dance-a-long finale to the three band event. 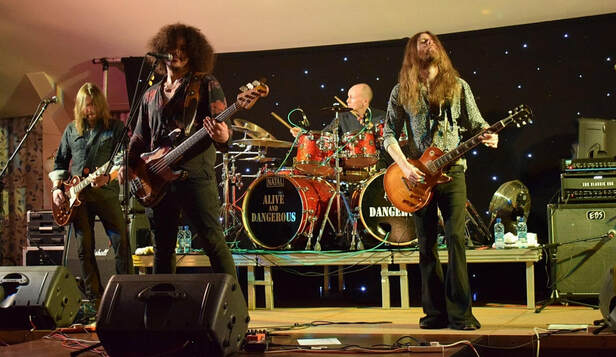 Brian Grace, Matt Wilson, Brian Downey and Phil Edgar - Alive and Dangerously close to the original vintage
The punchy and rapid-fire call and answer vocals of 'Gotta Figure Out' was more Lynott than Lizzy (which is fine by me thank you very much; we already have the Black Star Riders doing their Thin Lizzy pastiche every second song) but it bodes well for a new material future to dovetail with their authentic and respectful Lizzy homage (Matt Wilson, Brian Grace and Phil Edgar are all huge Lizzy fans; they also all played together in a Lizzy tribute band in Ireland prior to their Alive and Dangerous call-up).

​Alive and Dangerous also played a well-received and excellent show in Dumfries the night before, a rock gig in a live music venue in front of a rock crowd – which begs the question, whys and wherefores of a band with a pedigree above the tribute act norm playing the following evening in a large, out of town hostelry that was hosting a fairly high ticket priced event tailored toward local music fans or those staying over at the Adamton Country House and Hotel (a ticket buying option).

But that question is also the answer – this was a local based, tribute night event, not a touring rock show, and in that respect it worked well, with the added bonus of a good sound for all three bands (kudos and applause to the sound guys).
Brian Downey’s drums were, hardly surprisingly, crisp, sharp and clean with very little echoey reverb but all bands, voices and instruments were loud and clear – even Rattlesnake Tattoo, who had time for no more than a guitar and bass line-check while the drums were still being set up, benefited from a well-balanced audio mix.

With the Darvel Music Company keeping it live in the East Ayrshire town of Darvel, the now highly regarded WinterStorm Rock Weekender in Troon, a myriad of mini-festival events in Ayrshire and tribute nights such as this, there’s A Whole Lotta Rock to be seen and heard in Scotland's historic south-west county.