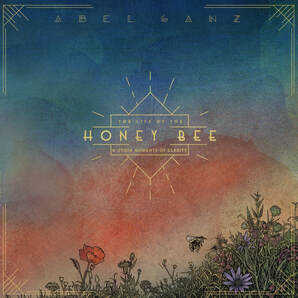 Back in 2014 Scottish progsters Abel Ganz thought their eponymously titled album of that year would be their last (an everything-but-the-kitchen-sink 72 minutes, 14 song signing off statement); six years on however we should all be thankful that’s turned out not to be the case.

The Life of the Honey Bee & Other Moments of Clarity is also the band’s first concept album or, more accurately, an interlinked and themed work that, through emotive vocals & personal lyricism from Mick Macfarlane, deals with our relationship with memory and loss.
Nor does it hurt that the album also boasts an excellent production from Denis Smith and beautifully balanced mix from Simon Vinestock (Tears For Fears, Blur, Robert Plant, Simple Minds to name but four).

The gorgeous rise and fall of the twelve and a half minute title track opens proceedings in quite striking fashion; progressively arranged parts comfortably interweave with Toots Thielemans styled chromatic harmonica (Alex Paclin), fiddles, recorders (Fiona Cuthill) and a saxophone solo (Snake Davis) on the outro.
While the inclusion of a Fender Rhodes make for a song redolent of Supertramp the title track mixes west coast soul-jazz, Steely Dan-esque moments and classic-era It Bites to produce a wonderfully blended beginning.

The thirteen and a half minute 'Sepia and White' starts with a woozy 'Café del Mar' type intro before transforming to an altogether rockier affair with a purposeful funk vibe (think Kansas meets fusion).
What the song does more than anything, however, is showcase a band who are tight as the proverbial as they play and integrate different styles/ genres.

On the weightier and pacier passages of 'Sepia and White' Stephen Donnelly and Denis Smith drive the song along in accomplished Lee / Peart fashion, while the keyboard orchestrations from Jack Webb and Alan Hearton (a heady mix of piano, Hammond, vibraphone, synths and a light and airy moog solo from Hearton) will tick all the boxes of fans of Marillion/ Genesis/ Porcupine Tree.
But these are merely reference points; this isn’t progressive music, this is Abel Ganz music, and a song that deserves to be hailed as a modern-prog classic.

The CD version of the album closes with a Radio Edit of 'One Small Soul,' thus providing a 50 minute, 7 song work that is unequivocally the finest album of Abel Ganz’s career.

Six years in the making, the musically thoughtful and lyrically emotional The Life of the Honey Bee & Other Moments of Clarity could have been sub-titled A Labour Of Love, for it is no less, as Denis Smith confirms:
"We have all pushed ourselves so incredibly hard on this record in an attempt to make this the best possible ‘complete work’ we could make. Everything on the record is interconnected and is there for a reason – right down to the guests we chose to play specific parts, the spaces we chose to record in, to the artwork."

Abel Ganz should be mightily proud of this album; it’s probably destined to never hit the commercial highs or sales numbers of the Marillion’s or Steven Wilson’s of the modern prog world (that’s just the way the progressive cookie has crumbed for Abel Ganz (and so many other extremely talented bands) over the years and decades) but their small piece of the progressive pie is one of the tastiest.

More importantly, they have delivered one of the best albums you will hear all year, progressively themed or otherwise.

The Life of The Honey Bee & Other Moments of Clarity can be purchased from the Abel Ganz Bandcamp page in CD, digital download or Deluxe Transparent Coloured Vinyl:
https://abelganz.bandcamp.com/album/the-life-of-the-honey-bee-and-other-moments-of-clarity