Who could have dreamed…
Alice Cooper - Welcome 2 My Nightmare 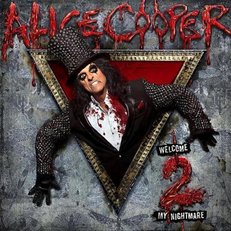 It’s been a long time since Alice Cooper, Godfather of theatrical shock rock 'n' roll, came up with anything that could be described as Classic Cooper.

In the 70’s – on just about every album after the first two psychedelia and Zappa influenced releases – the Alice Cooper Band, then Alice Cooper the solo artist, were responsible for some of the best conceptual, diverse and greatest music in rock.

But for a man who once decided to Flush the Fashion the reality is that, for the last three decades, it’s primarily been  formulated 80’s and 90’s Trash 'n' roll and Millennium melodic metal.

There have been exceptions, such as 1994’s The Last Temptation (a serious return to form) but the chances of Alice Cooper ever revisiting the classic era or recreating something quintessentially Cooper, seemed remote. At best.
But who could have dreamed…

Welcome 2 My Nightmare is, as the name suggests, a sequel or themed follow up to the classic 1975 original.
Cooper had at first considered a sequel to his 2008 album Along Came a Spider, but Bob Ezrin (producer and influence on just about every Alice Cooper release of the 70’s) wasn’t taken with the idea and the pair decided to go further back for inspiration and return to nightmare’s past.

And good move it was too, because Welcome 2 is a startling return to form, diverse in content and themed around the nightmarish scenarios of the original without ever copying or rewriting that classic material.
The Lyrics vary from dark and black to the thoughtful and downright funny.

Having Bob Ezrin back at the controls (and contributing to the writing and arrangements) has also paid dividends. It’s a clean production but intentionally and successfully captures the vibe of the original Nightmare and that 70’s sound.

And it doesn’t hurt that members of the original Alice Cooper Band – Michael Bruce (guitars, keyboards) Dennis Dunaway (bass) and Neal Smith (drums) all make appearances on the album and have individual co-writing credits on the their three featured numbers (the other ACB original, guitarist Glen Buxton, sadly died in 1997).
Guitarist Steve Hunter, who played on a number of ACB albums (and worked with Cooper in the latter half of the 70’s) also gets to flex his six-string fingers on a few of the tracks.

The album opens in grand fashion with ‘I Am Made of You.’
The song starts with a familiar chill courtesy of the revisited piano intro from the original Nightmare’s ‘Steven‘ (the central player of the 1975 album and a recurring character on other Cooper records). The mid-tempo number builds from its piano-vocal opening to become a theatrical piece that is almost rock opera in scale.
It's already being hailed as a classic Cooper song.

For all the darkness of the concept there is a serious amount of fun to be had with Welcome 2.
‘Caffeine’ is infectious fun-filled rock and roll, based on the dangers of grabbing yourself too much of that stimulant – a too-wired-to-sleep nightmare for many.
‘A Runaway Train’ (featuring the ACB musicians) thunders down the rock and roll tracks in the tradition of ‘Under My Wheels’ while ‘Last Man on Earth’ is an observation after the Runaway Train crash, sung and arranged in a Vaudeville meets Cabaret style.
And although Cooper has stated ‘The Congregation’ was inspired by the Beatles, it’s loudly and clearly the greatest song Green Day and Oasis never got together to do.

Just about every song carries a macabre theme however.
Some are very dark in tone, such as 'When Hell Comes Home' (dealing with family abuse), while some levity is restored with the surf rock of 'Ghouls Gone Wild' and 'Disco Bloodbath Boogie Fever.’
The latter is a truly awful song (but then that’s the point), presented in a very specific musical and lyrical form to reinforce the fact that disco, sadly, never dies.
Even when everyone else does.

For all its diversity, Welcome 2 still manages to throw up a surprise or two.
Female singer/ rapper Kesha guests as the Devil in ‘What Baby Wants’ while the soft rock ballad ‘Something to Remember Me By’ would seem to be a strange choice for an album full of nightmares.
But this is an Alice Cooper album and things are never as they first appear...
'Something' actually sat unused and unsung for over thirty years but has finally found a home. And a fitting home it is too –  musically it's the nicest piece on the album but lyrically it's being sung to parts of a corpse.
As you do.

The album closes with the instrumental ‘The Underture,’ another rock opera piece.
The track revisits themes from both Nightmare albums and features guitar work from Dick Wagner, another musical sparring partner of Cooper’s from the 70’s and early 80's.
The very nature of the piece means it should be the opening number but, again, this is an Alice Cooper album – so where else would it be but the end.

As is the norm these days, the album comes in many shapes and forms.
It may be listed as a 14 track album, but even the Standard Edition comes with a bonus track (a great cover of The Animals hit ‘We Gotta Get Out of This Place’) and there are various other versions available including Fan Pack, Deluxe Edition and Vinyl. Each has one, two or three bonus tracks.

The Alice Cooper Band releases, from Love it to Death onwards, helped define 70’s rock. And there’s an argument for Killer being the Alice Cooper album.
But as regards the individual and performer known as Alice Cooper, three solo albums stand out as showcases for the musical diversity and originality of the artist…

Welcome to My Nightmare is the 1975 album that set Alice Cooper on his way as a solo artist and theatrical shock and roll performer.

From the Inside is another concept album, this one based around the singer's stay at a sanatorium due to alcoholism and health concerns.
Released in 1978, Inside is his finest 40 minutes and most accomplished work.

Zipper Catches Skin takes its musical lead from early 80’s post-punk new wave and features lyrics that are tongue-in-cheek, sarcastic and just plain funny.
Zipper was not well received and didn't chart in the US or the UK, but it’s a sometimes humorous, sometimes bizarre and a genuinely unique Alice Cooper release.

As does Welcome 2 My Nightmare.
Some thirty-six years after the album that inspired it.


The following audio tracks are presented to accompany the above review and promote the work of the artist/s. No infringement of copyright is intended.

Caffiene
Something to Remember Me By