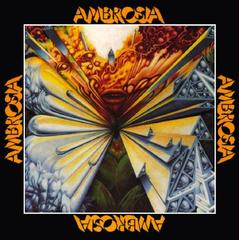 Many bands have made the transition from critically acclaimed but commercially unsuccessful origins to guaranteed airplay and chart success, via musical makeovers.

The most common or noticeable occurrences are usually found within the American rock genre, with many such transformations taking place between the mid to late 70’s and the early 80’s.

Journey is an obvious example, moving from instrumental based fusion to champions of melodic rock.

REO Speedwagon followed a similar route, albeit to a lesser degree, moving from hard rock to a more polished AOR sound.

The musical origins of Styx were progressive rock and roll, a far cry from the theatrical melodic rock they would become famous for.

And then there's Ambrosia.

There would be a couple of personnel changes/ additions later in their career but in their original form, and across their first two albums, they was a very progressive musicality.
Unusual for a California based band, especially in the early to mid 70’s.

But catching a King Crimson concert in 1969, when the British band were promoting their art-rock debut In the Court of the Crimson King, was a progressive turning point for the musicians who would become Ambrosia.

Seeing King Crimson clearly made a musical impression, but Ambrosia’s outstanding vocal harmonies and more melodic arrangements were clearly influenced by the Beatles and The Beach Boys.

The eponymously titled 1975 debut album contained some truly excellent and interesting progressive moments, typified by the minor hit 'Nice, Nice, Very Nice' and 'Mama Frog.'
The more radio friendly and ethereal 'Holdin’ On To Yesterday' went on to become a Top 20 single.
On the back of the single success Ambrosia did reasonably well but Somewhere I’ve Never Travelled, the band’s second progressively influenced album (highlights include the spacey and harmonic title track), was ignored by the masses.

Interesting aside – Alan Parsons engineered Ambrosia's debut album, produced their second, and the four members of Ambrosia would appear on the debut Alan Parsons Project album, Tales of Mystery and Imagination, released in 1976.

As the changing musical climate of the mid-70’s gave way to the melodic rock of the late 70’s (which would become the American rock genre in the early 80’s), Ambrosia transformed themselves into a hard, soft and balladeering rock outfit.

The band's third album, Life Beyond L.A., was released in 1978 and covered all those bases.
Christopher North however left the band during the recording of the album in 1977 but would return as part of the 1978 touring band.
Life Beyond L.A. was a Top 20 success and spawned a Top 3 single with the soul-pop ballad 'How Much I Feel.' Both album and single were a musical sign of things to come.

Ambrosia's 1980 album One Eighty made the Billboard Top 25 (producing three Grammy nominations and another Top 3 hit single) but their fifth and final album, Road Island, was a slightly different beast.

Road Island incorporated hard rock and featured a return of progressive elements to counterbalance the power pop-rock and lighter material, but by 1982 melodic rock and soft rock were in full flow.
Road Island contains some of Ambrosia's strongest musical statements, but the album failed to break the Billboard Top 100 album chart.

And for all the success of Life Beyond L.A., One Eighty and the singles of that period the band's most creative, innovative and musically interesting work is to be found on their earlier albums.

Sadly, though, "creative," "innovative" and "musically interesting" are not always seen hand in hand with "popular," "successful," or "Platinum sales."
And in this reimagined day and marketable commodity age, they’re even less likely to be seen together.

But what has been seen – and heard – together in more recent years are those early progressive tunes and the successful soft rock numbers performed by the original band, reformed in 1989 to play primarily West Coast shows.
Tour dates were then scheduled every year or so, right through until the dawning of the Millennium.

In 2001 David Pack left due to other commitments (working as songwriter, producer and solo artist) while Joe Puerta, Christopher North and Burleigh Drummond continued to tour, augmented on stage with additional musicians.
Ambrosia released a live album in 2002 and another in 2007 (also recorded in 2002).

A couple of years later and Ambrosia were still performing, now as a quintet, with the addition of guitarist Doug Jackson (who has been with the band since 2001) and Rick Cowling (vocals, keyboards, guitars) who joined the ranks in 2009.

And the sound they make?


The audio tracks are presented to accompany the above article and to promote the work of the artist/s.
No infringement of copyright is intended.