The 'Best Of' times...
An Evening With Todd Rundgren - Live at The Ridgefield (CD&DVD Edition) 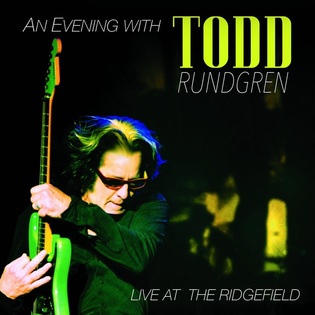 Will the real Todd please stand up?

Because after forty-six years of solo artist creativity and diversity (not forgetting the earlier Nazztastic and later Utopian eras), acclaimed production work and audio & visual innovations, it’s still impossible to pigeonhole or determine who Todd Harry Rundgren is.

And thank Todd for that.

However in late 2015 and early 2016 Todd Rundgren was in Give The Fans What They Want mode on his Evening With tour, backed by what has become his preferred personnel of choice, both individually and collectively:
fellow ex Utopian Kasim Sulton (bass, vocals), Jesse Gress (guitars, vocals), Prairie Prince (drums) and John Ferenzik (keyboards, vocals).

Opening with 'I Saw the Light' (complete with a short rock intro that features the briefest flicker of early era Rundgren moments including 'The Ikon' and 'Once Burned' (one for the Runt fan diehards)) and closing out with the sing-a-long brace of 'Hello It’s Me' and Utopia fan anthem 'One World,' the show recorded at the Ridgefield Playhouse in Connecticut in December 2015 covers pretty much all the Rundgren bases – or at least two dozen of the songs many a Rundgrenite would have on their own, far larger, wish-list.

From the guitar chiming charm of 'Love of The Common Man' (as perfect a melodic hard pop song as has ever been written), back to those Nazz days via the psychedelic fuzzed-out 'Open My Eyes' and the R&B shufflin’ fun of 'Kiddie Boy,' through the harder-edged 'Black Maria,' 'Buffalo Grass' (Rundgren delivering searing six-string solos on both) and 'Black and White' (Jesse Gress firing off those trademark scatter-note licks of the original while bringing his own whammy bar controlled notes to proceedings elsewhere) it’s undeniably a set of fan favourites.

And those "I hope he plays…" song choices just keep coming.
The genuinely heartfelt soul-pop of 'Sometimes I Don’t Know What to Feel' features Todd Rundgren in vocal duet with Kasim Sulton, who still has that back-in-the-day Billy Joel / Paul McCartney lead and harmony vocal working and still looks ten years younger than he is (I hate him)…
'Soothe' is a beautiful piece of quintessential Rundgren balladeering that resonates beyond its synth washed Global studio recording…
'Can We Still Be Friends' remains a marker in just how to write exquisite vocal and harmony pop…
The power-chord and yell it out chorus of Utopia’s 'Love in Action,' complete with extended "can’t stop!" pause before the band kicks back in, is a guaranteed highlight of any Todd Rundgren set.

An Evening With Todd Rundgren may be a clear and obvious case of a Best Of performance but it's certainly not a case of Todd Rundgren and band going through the motions musically or with an etched in stone set list. 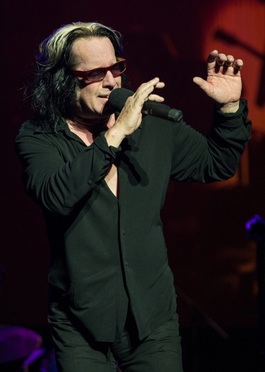 Firstly, and as the DVD perfectly presents, Todd Rundgren and his band are clearly having fun.
Rundgren is fairly animated throughout, covering the stage as he plays out his part and delivering his famous spin and jump move as he strikes the last guitar chord on the rockier numbers.
There’s even the high-kicking finale to 'Couldn’t I Just Tell You,' something Rundgren, Kasim Sulton and keyboardist Roger Powell used to regularly incorporate back in the Utopian day.

Secondly, the tour carried a fifty song repertoire, with Rundgren only providing the band with that night’s set list shortly before they were due to go on.
That’s a manoeuvre that guarantees you have to be on your musical toes, gives each audience a little variation and keeps it fresh and fun for the quintet.

Because other than his crooning on a stool deliveries ("I’m 67, whaddya want?" quips Rundgren) of the soul-pop brace 'I’m So Proud' and 'Ooh Baby Baby,' Todd Rundgren is not ready to take a seat yet.

This is an artist who is still standing up to be counted among the eclectic Zappas and enigmatic Bowies of the musical world and, while he was never destined to be commercially successful (part of which is of his own making and choosing), he is the equal of those late greats in creative stature.

And for that alone we should be grateful for the opportunity to have An Evening With Todd Rundgren.

An Evening With Todd Rundgren is also available on Blu-ray, Vinyl and as audio digital download.