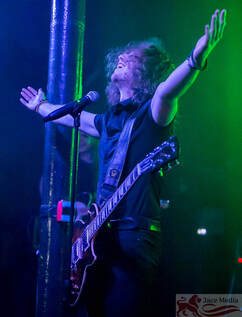 We have a winner... Anchor Lane's Conor Gaffney at the G2 Casino of rock and roll
It’s all too easy to get caught up in the great (or best) new rock band / one to watch / catch them now before they are playing arenas hype that, truth be told, usually falls well short of the mark, is based on nothing more than favourite band tinted spectacles or part of the PR push to sell an artist.

Such adulatory comments appear because there are a lot of very good new bands now emerging in what is described as the New Wave of British Classic Rock.
​
The reality check however is an antidote to the over-hype; a more objective conclusion being you can only hope said band gets a fair crack of the whip in what is a roll-the-dice crapshoot of an industry.

It’s therefore fitting that Glasgow’s Anchor Lane, a seriously top-notch contemporary rock quartet, have decided to title their forthcoming debut album Casino – a metaphor for the high risk gamble of going all in to win a successful future in rock and roll.

Four months prior to the release of Casino, at the G2 venue in Glasgow, Anchor Lane underlined just how much they have grown in stature and confidence since their new band beginnings and New Beginning EP of 2017, courtesy of a Single Launch show for latest offering, 'Fame Shame' (a punchy, rapid-fire number that has Casino album producer Toby Jepson’s sonic stamp all over it). 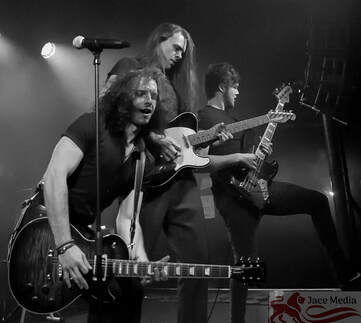 For proof, you just have to listen to the impressive song strength that will feature on Casino as well as the differing sonic shades; the latter trait heard to great effect on ballad 'Shell of Me,' featuring a personal lyric and a more delicate, but still purposeful, lead vocal from Conor Gaffney.
​
'Shell of Me' also worked well in the band’s VIP Invite acoustic performance early show, as did 'Casino,' proving yet again that a good song is a good song whether arranged acoustically or with guitars amped to 11.

Also featuring in both sets was a sing-a-long cover of 'Whiskey in the Jar' (based on the Thin Lizzy version, natch).

It’s inclusion in the main set prompted FabricationsHQ contributor (and well kent bass playing face in the locale) Nelson McFarlane to ponder what age the Anchor Lane lads were when Lizzy recorded their version of the traditional Irish classic, only for your reviewer to reply "on average, still around 22 years from being born" (pass the slippers and hot cocoa, please). 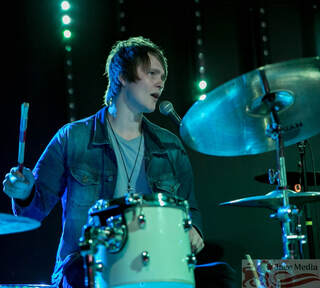 Scott Hanlon - no flash, all substance
​​The G2 show wasn’t all about Casino, 'Shame Fame' and a famous folk-rock cover however.
The big beats and metal-rock of 'Annie' (complete with mid-song segue to 'We Will Rock You,' guaranteeing to get any audience on your side early) and the swaggering slice of heavyweight rock that is 'Finished For Twelve' (both songs double-time themselves to belting finales), remain New Beginning highlights of any Anchor Lane set.
​
Band wise, you couldn’t fault the quartet.
Conor Gaffney is a confident front man and a singer who has grown in vocal (and lyrical) stature since working with Messrs Warwick and Jepson; he’s also none too shabby on guitar.

Lawrence O’Brien’s six string work is both slick and feisty; his short solo showcase ranged from melodic noodling to full throttle dexterity and a fast-fingered burst of 'Flight of the Bumble Bee.'

Scott Hanlon and Matthew Quigley are a tight and tidy rhythm section; Hanlon is seriously solid, no flash and all substance drummer while Quigley can underpin a song with a beefy, low end bass line or get sinewy on the four string as needed.

What you could fault however was the sound, which was, frankly, awful for guest supports Salt River Shakedown and Tomorrow is Lost.

Salt River Shakedown (formerly known as Magic Trik) are a local four-piece who mix fuzzed guitar tones with raw blues and rock through tempo changing transitions and short jam-like sections.
Unfortunately their individualist sound was scuppered from the get-go with an audio mix that dampened Alek McMillan’s guitar (a pivotal part of the Salt River sonic) down to a muddy, flat tone while both bass and drums were too high.

Front man David McFarlane’s counter-point screams were audible enough but his lower register vocality was lost in the audio shuffle. The funky 'Sunbird' and "whoa-oh" number 'Just You Watch' (both from the band's extended EP Road to the Sacred Island) were discernible highlights but the rest of their "fuzzalicious" material never got a proper hearing.

Similarly hamstrung were Tynesiders Tomorrow is Lost.
Fronted by ever energetic, stage bouncing front gal Cass King, the twin-guitar driven quintet from Tyneside deliver seriously weighty, contemporary rock-metal.
The band showcased a number of new songs that will feature on their debut album (scheduled for early next year) but Miss King’s vocal was inaudible for half the set and never got above the instruments in the mix, other than when she gave it large (such as on rip-snorting set closer 'We Are the Lost') or the big voiced choruses. The bass being consistently louder than the guitars didn't help matters either.

That Tomorrow is Lost still went down well however tells you this is a hard hitting outfit with big riffed power and a band that managed to beat the audio odds stacked against them.

There were similar guitars low, bass high issues for Anchor Lane on their first two numbers but, following the aforementioned Mr McFarlane’s short chat with the sound guy to lift the guitars up in the mix just a tad (well, words to that effect) normal guitar rock services were, finally, implemented.

Sound issues aside, Anchor Lane showed, in extremely confident style, why they may yet come out as big winners from the Casino of rock and roll; it’s certainly no less than their hard work, determination, ability and weighty song prowess deserve.