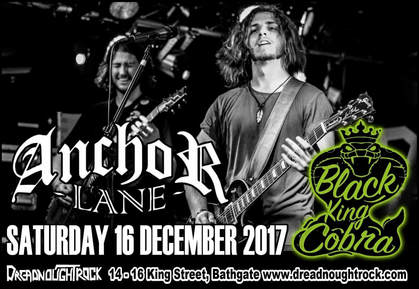 There’s certainly an argument that, having seen Anchor Lane in action half a dozen times in around as many months (mostly by happy support - special guest - eleventh hour call-up accident over design) plus their appearance at WinterStorm II last month, and having caught Black King Cobra at the same rock weekender event (opening the second day in fine groove-rock fashion) there was little sense in a chilly, 130 mile round trip from South Ayrshire to West Lothian and back again to catch both at the DreadnoughtRock in Bathgate.

But a chance to see two of Scotland’s best and brightest hopes in rock together, this time playing longer sets, and at a great little venue (the fun and friendly 'Nought is Scotland’s longest running rock club) is well worth the drive and travel time.

There’s also the fact that, while the Glasgow based pair swim in the same rock-bedded waters, they ply their trade in very different areas of the rock pool.
Anchor Lane’s heavy rock with metal sheen may seem at odds with the groove-rock and riff-driven funk of Black King Cobra but both bands carry such sonic vibrancy and energy (both musical and physical) that they are perfect live set bedfellows – a win-win for the rock loving DreadnoughtRock audience.

The name Black King Cobra might give the impression of venomous amps to 11 rock but the band, led by engaging front man Callum Moran and featuring some none-too-shabby jam-styled interplay from Ross Clark (guitars), Johnny Keel (bass) and Steve Todd (drums) are a groove-rock outfit who put the emphasis firmly on the word groove, plus a whole dose of funk and a prevalence for double-time, big crescendo of sound finishes – the infectious beat and hooky melody of 'Wrack N' Ruin' (which features on the band's self-titled 2-Track EP released earlier this year), ticked all those musical boxes. 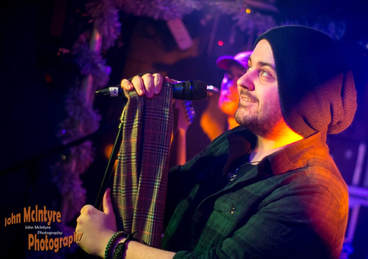 Black King Cobra's groove smiling front man Callum Moran
​Other BKC stand-outs included opening number 'Blood Rush,' and 'Shiver.'
The fully funked punch and intensity of 'Blood Rush' (the other EP track) featured some serious four-string drive from Johnny Keel; his bass lines threaded through an intense rhythmic groove delivered by Ross Clark’s guitar and Steve Todd’s percussive drum stylings.
​'Shiver' opened with a low-key, slow-soul beginning before it built to not just the grooving shiver of its title, but to shimmer and shake with funkified rock purpose; the song concluded in a short instrumental burst with bass, drums and guitar in unified overdrive.

Just as the Cobra has a forked tongue, the Black King variant can occasionally take a fork on the musical road, yet still with that distinct and original groove as their foundation.
'Ball and Chain' swayed as much as it rocked (ending on a wild guitar and pedal effect finale) while 'Harvest Moon' rocked out with old-school bravado and a riff-driven groove so heavy it’s a wonder it didn’t cut a channel in the stage floor.

The final two numbers of the set (followed by a quick-fire instrumental jam that acted as the encore/ wrap-up) were new songs; both helped to showcase a band that, even after only a short time together, are developing at a fair old pace.

'Quake' and the other number (so new it was simply set-listed as a "new one") were honed to a less jam, more concise and perfected sound, pointing to what should be – given a favourable musical wind and a fair hearing – a solidly grooved future for Black King Cobra.

Anchor Lane need no introduction to Glasgow area rock audiences nor those further afield, from the Ayrshire west coast of WinterStorm to the eastern side of the country and the DreadnoughtRock (where the band are no strangers).

Anchor Lane’s fellow Glasgow based rock heavyweights, Mason Hill, may be making huge strides as they head toward a debut album with Frontiers Records but make no mistake, as regards confidence, tightness, ear-catching attention and hard rocking song quality Anchor Lane are right behind them.
To the extent that, as FabricationsHQ has previously made mention, it’s now not a matter of if Anchor Lane deliver a cracking debut that blends concrete heavy riffs with a more contemporary, metal-tinged sound, but when.

At the DreadnoughtRock the Anchor Lane four-piece of Conor Gaffney (lead vocals, guitars), Matthew Quigley (bass, backing vocals), Jack Nicol (guitars, backing vocals) and Scott Hanlon (drums) did everything they could to prove that very point; they delivered an hour long set that featured everything you would want from a now highly anticipated full-length debut (the band released the excellent 4-Track EP, New Beginning, at the top of the year).

Staples from that EP still shine as undeniable highlights – the air punching, woah-oh-ohs of 'Annie,' the double cement-slabbed whammy of usual set closing brace 'Twenty Sixteen' (with teamed metal-edged riffing from Conor Gaffney and Jack Nicol) and the bluesy-edged swagger of 'Finished by Twelve' – but other songs from the band’s repertoire more than make their mark, including 'Eclipse' (it’s quite the trick to be this melodic when you’re this heavy) and the dial it down, slow build of 'Take Some Time.'
The latter allows Conor Gaffney to make himself truly heard, vocally speaking.

As an added bonus, there was the first live outing for new song 'Rising Up,' a bristling mid-tempo and contemporary rock-metal number that should have the Mason Hill boys looking over their shoulders.
It’s also a song whose title I can only hope is a sign of Anchor Lane things to come and, in terms of performance, was ridiculously tight for its first outing – but then both band and material have been lock-down watertight all year.

On a cold December night the warmly received Anchor Lane and Black King Cobra reinforced the fact that there is a plentiful supply of great new rock music from some great new rock bands north of the border, all of whom deserve to be heard by a larger and wider audience – consider Concrete Kingdoms (contemporary hard rock with an Indie vibe), the heavy melodic rock of The King Lot or the subtly Emo-tinged alt-rock of relative newcomers IKARI, to name but three others worthy of attention, a spin or a gig ticket.

Yep, certainly worth the round-trip for a DreadnoughtRock night of Anchor Lane’s heavy indentations and Black King Cobra’s solid grooves.