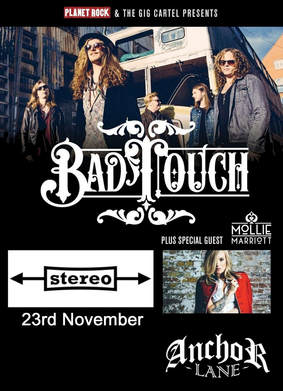 While everyone in the Stereo's downstairs music club had come to see Bad Touch on their first ever headline tour of the UK, the bonus for the Glasgow fans was an opening thirty minutes from "well kent" in the city quartet (and many a Scottish rock venue further afield), Anchor Lane, currently breathing down the neck of Mason Hill for the title of best new contemporary heavy rock band in Scotland.

While their involvement in the show was at the eleventh hour it didn’t stop Conor Gaffney (vocals, guitar), Jack Nicol (guitars), Scott Hanlon (drums) and Matthew Quigley (bass) delivering the heavy goods; but then Anchor Lane have been water-tight this past year and working as hard as any band you care to mention.

As if to prove that point this was the third time in as many months I had caught the band; they were also just a week away (courtesy of a 'Storm Breakers' battle of the bands win) from an excellent and crowd pleasing showing at the WinterStorm Rock Weekender in Troon).

While much of the band’s material is led by the concrete heavy riffs supplied by Conor Gaffney and Jack Nicol the majority of songs also feature interesting change-ups and/ or dynamic shifts, all underpinned by Scott Hanlon’s muscly beats and Matthew Quigley’s rippling bass lines.

Equally importantly, New Beginning EP numbers such as 'Twenty Sixteen' and the bluesy-edged weight of 'Finished By Twelve' now sit comfortably alongside songs such as 'Runaway,' the bristling 'Eclipse' and the change-of-pace, slow build power of 'Take Some Time,' a song that allows Conor Gaffney to make himself truly heard, vocally (and a number that is now a highlight of any Anchor Lane set).

All of which leads to the conclusion that it should only be a matter of time before Anchor Lane are recording what will be a heavyweight (in both senses ) debut album.

Mollie Marriott’s brand and blend of rock and soul blues could well have sat uncomfortably between the amps to 11 of Anchor Lane and the outstanding southern tinged rock 'n' roll that Bad Touch deliver (and many in the audience were unfamiliar with Miss Marriott’s recently undertaken solo adventure), but it’s a testament to the quality of the songs, tightness of her band and more significantly the quality of her voice (which can flit between rock, pop and soul with ease and is not too far removed from the wonderful Sam Brown back in her late 80s and 90s singing-career days), that the Glasgow crowd took notice and voiced their support throughout.

Unsurprisingly the bulk of the set was built around Marriott’s recently released debut solo album Truth is a Wolf.
Opening Truth brace, the rhythmic and melodically punchy 'Run With the Hounds' and the soul spacey, rock-edged title track (the latter featuring some howlingly (sorry) good guitar work) was an opening one-two that will get any crowd’s attention; two non-album numbers were also performed, including the darker but no less impacting 'Nobody To Love.'

But at the heart of Mollie Marriott’s vocality and song styles are contrast and shade – from the soul-pop smooth 'Broken' to a rattlin' version of Tom Petty’s 'I Should Have Known It' and on to set closer, 'Control,' a classy slice of soulfully swaggering and sassy blues rock.

Mollie Marriott was still a child when she lost her father, the legendary and powerfully voiced Steve Marriott, but there is no question he would have been very proud of what his chip off the rockin' block has accomplished in a relatively short time.

And, using Truth as a Wolf and her special guest performances on the Bad Touch tour as her recording and performing starting points, could yet achieve.

In a different age and era, all things being musically equal, Bad Touch would be filling concert halls or theatres and not doing decent business on the rock and blues club circuit, but if we were to decide quality and talent is gauged by mainstream media coverage, TV appearances and radio favouritism, we might as well all down tools and stay in to watch Britain’s Got X Factored Voice Talent.

Bad Touch may yet have a bigger part to play in the UK rock scene but no matter the venue size or struggles with wider recognition (and therein lies the rock and roll rub) there is no question this is one of the best bands currently performing – and when you consider the plethora of new talent making itself known to those who understand and appreciate there is more to 21st century rock music than Greatest Hits tours by many a classic rock artist, or the name acts that are now more brand than band, that’s quite the accolade.

But it’s an accolade that the Norfolk based quintet wear well and can handle just fine, thank you very much.
And that's because their rock solid reputation is based on, and built from, two strong albums and a front man in Stevie Westwood whose charisma and vocality matches the instrumental power of his four Bad Touch brothers – rhythm guitarist Daniel "Seeks" Seekings (who also supplies some tasty lead), the seriously solid rhythm section of Michael Bailey (five string bass) and George Drewry (drums) and newly returned lead guitarist Rob Glendinning (who effectively replaced his replacement, young six-string guitar slinger, Harry Slater).

Opening their hour and encore set with 'Take Me Away,' which rocked like the proverbial, Bad Touch delivered a first class, second album focussed set that included such Truth Be Told nuggets as the rollickin' 'Heartbreaker Soulshaker,' the contemporary-meets-classic rock groove of 'My Mother Told Me' and the take-a-load-off, bring it down sounds of 'Take Your Time.'

The featured Truth Be Told tracks dovetailed perfectly and seamlessly with the handful of debut album Half Way Home numbers given an airing, including the Stonesy romp and roller 'Good On Me,' the raunchy mid-tempo rock of 'Sweet Little Secret' and the southern fried hard rock of 'Wise Water' (with some tasty opening slide remarks from Rob Glendinning).

The new and the old also impressed – the southern styled hard ballad 'I Belong' is a seriously strong and affecting new number about the importance of belonging and home, while the thunderous 'Down,' which precedes the band’s first two albums, was dedicated on the night to Anchor Lane because "it’s something a bit heavier!"

The main set ended on the outstanding Truth Be Told brace of 'Outlaw,' a bristling, mid-tempo tale of the bad boys of the old west and 'Mountain,' a weighty, heavy rock blues for the planet.

The encore heralded the return of not just Bad Touch but Mollie Marriott, she and Stevie Westwood dueting on the recently released Bad Touch-Mollie Marriott single 'Baby Get it On' (a vibrant and feisty cover of the Ike and Tina Turner original).
The Bad Touch boys then wrapped up another excellent show with the ridiculously infectious rock and roll of '99%.'

The November tour undertaken by Bad Touch was a great success for the band (including a sold out show in their home town of Norwich) and great exposure for Mollie Marriott.
At Glasgow it also included another strong live outing for Anchor Lane.

Which is just the sort of exposure acts such as Bad Touch, Mollie Marriott and Anchor Lane  need to spread the word, get noticed and move up the ladder.

And on this form, along with the songcraft each delivers in their given rock genres, all are deserving of the attention to do just that, Truth Be Told.