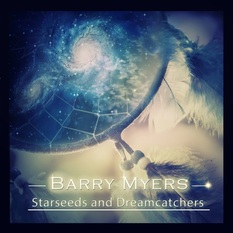 The musical influences of singer, songwriter and multi-instrumentalist Barry Myers range from Dan Fogelberg to Pink Floyd but as his debut album 7th Avenue highlighted to great effect the Floridian musician has crafted his own, highly captivating sound.

7th Avenue, released in 2010, garnered attention around not just Florida but much further afield via iTunes and Amazon availability.
And with good reason.

At the heart of 7th Avenue is an open and accessible soft-rock sound but there are also some clever arrangements, a little cool jazz and plenty of melody.

It was a solid debut but on Starseeds and Dreamcatchers Barry Myers has gone further – in fact he’s gone back to the time of the Ancients and even off-world for musical inspiration.

In a fascinating creative parallel Barry Myers found himself composing on themes that include, and interlink, the Starseed theory of life on earth, Dreamcatchers and the Mayan end of the Great Cycle prophecy while his wife, author Ivy Gilbert, was writing The Keeper of Clarity, the first in a New Age fiction series where past and present converge to determine where we may be headed.

It turned out to be quite the double creative whammy – The Keeper of Clarity hit #1 on Amazon.com’s Best Sellers list during the summer months of 2014 and Starseeds and Dreamcatchers is nothing less than one of the strongest rock releases of the year.

The album opens with a short and delicate classical guitar piece from Barry Myers before the questioning lyrics of the title track express themselves within a melodic, mid-tempo framework that can be compared to the best Star Rock of the 70’s.
'Dreamcatcher' follows and has an almost hypnotic ambience guided by a pulsating, rhythmic drum pattern from Sean Shannon (Pat Travers Band, Molly Hatchet, Outbound Road).

As he did on 7th Avenue Sean Shannon contributes on both sides of the studio glass.
Sean Shannon is an excellent drummer but the sound he captures in his studio is exceptional. Starseeds and Dreamcatchers has a full-bodied, multi-layered sound that never sounds cluttered; Shannon’s production and mix perfectly capture the musical atmospheres Barry Myers has created.

Sean Shannon is not the only returnee; a number of musicians who met down on 7th Avenue have reunited for Starseeds and Dreamcatchers including keyboard and Hammond B3 player Michael Stewart, Outbound Road vocalist Billy Varnes (here contributing on bass as well as backing vocals) and a guitarist by the name of Pat Travers.

The legendary Canadian six-stringer is a genuine fan of the music of Barry Myers and has produced some outstanding lead lines that float across the melodic soundscapes, sonically complimenting songs such as the spacey 'One Light' and the sumptuous New Age melodic waltz 'Indigo Child.'

While all the songs carry a particular ambience or feel, a number of them also demand airplay on any and every rock and pop radio station you care to mention. None more so than 'Angels and Elvis.'
An infectious slice of other worldly melodic rock layered over a heavy acoustic foundation, you’ll just need to hear the song once to have Elvis and his winged friends in your head all day.

The funky 'Days and Numbers,' the reflective soft-jazz piano meets soft-rock of 'Arrival' and the ballad 'Home Again' form a trilogy based on the Mayans, the ancient Aliens visitation myth and returning home to their origins.
All three songs also share a musical commonality, courtesy of the guitar melody-lines from Pat Travers that flit in and out of the songs.

For those of you who have no interest in possible extra terrestrial jiggery pokery on this ball of rock or find such theories too out there (man), fret not.
The album may have very specific influences and a semi-conceptual thread through its nine tracks but at its sonic heart is a hook-laden and atmospheric sound – the album can be as conceptually cosmic or as melodically down to earth as the listener wishes, or interprets, it to be.

The closing number 'I Am' is an ethereal dream-piece that differs from the layering of the preceding eight tracks by being sparser and incorporating cello and trumpet (from Grace Gavin and Zach Finnell respectively) over a repeating melody.
Using such instrumentation and using a completely different set of musicians from those featured on the rest of the album (the 'I Am' ensemble if you will) gives 'I Am' a very distinct sound, further enhanced by a short and intentionally discordant guitar burst from Eron Chambers; the dark side of your dreams given voice.

If 7th Avenue was the announcement that Barry Myers had arrived as a musician and songwriter, Starseeds and Dreamcatchers is the exclamation point.

But that’s simply the first and second chapters of Barry Myers musical career because all the prophecies point to a Musical Calendar that isn’t predicted to end anytime soon.