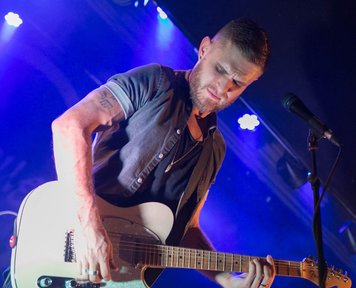 Ben Poole, bathing in bluesy rock, funk, pop and soul light
You wait a year for the Brian Rawson Band tour bus to turn up (OK, there was no bus and they aren’t on tour, but let’s not spoil the joke) only to then find yourself entertained by the Glasgow based blues rocking quintet three times in fairly quick support gig succession.

Not that the Brian Rawson Band had been quiet prior to recent live activities (far from it); there have also been studio sightings as the group start to record songs for what will be, if all things go to musical plan, a debut album in 2019.

Such a release would be recorded product at just the right time because the band currently ply their rock trade with their strongest line-up to date.
​
Joining guitarist Brian Rawson (a smooth toned six-stringer who can also put the Rawk in Rawson when required) are big voiced Glasgow vocalist Peter Scallan (Moritz, Chris Glen & The Outfit) and keyboardist Alan Hearton, a player who has a knack of knowing just what the songs need in keyboard complement or punctuation; the trio are augmented by a rhythm section of Paul McElroy (of top notch Alice Cooper tribute, Gallus Cooper) and the hard-hitting man at the back, Todd MacLeod. 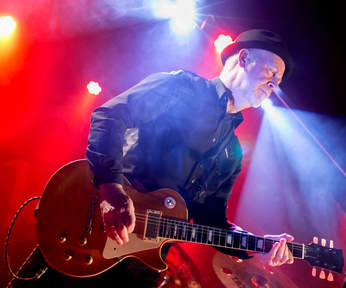 The spotlight is now on Brian Rawson and his band to deliver a studio album that features the best of their live material
​With a set that carried twice as many originals as covers (featured songs included the blues rockin’ 'Upside Down,' the rhythm and bluesy fun of 'Bad For Me,' the pacey 'Dead Man Walking' and their highly accomplished and tasty take of 'Sitting On Top of the World') the Brian Rawson Band reinforced their live credentials and underlined that an aforementioned debut album is now a must.

​​There is no argument that a low-key, all seated but highly appreciative audience for an artist such a Ben Poole can work (it certainly did at the Oran Mor with Poole making that very point when he quipped that his glass of red wine was more appropriate than the Jack Daniels and rowdier crowd scene of his Nice 'N' Sleazy rock cub basement venue last time around in Glasgow).

But neither should there be any doubt that Ben Poole can rock and play as hard (and as well) as any British blues rock artist out there – the dirty big riff-motif and muscly solo lines of 'Take it No More' from latest album Anytime You Need Me proved that very rock point (similarly Poole’s funky Fender tones on 'Further On Down the Line' from the same album).

The weightier sound was also, in part, due to the band's keyboardist Joe Mac being unavailable for some of the UK dates; the trimmed to power-trio line-up of Ben Poole, bassist Beau Barnard and, on his second tour of Ben Poole duty, King King drummer Wayne Proctor, naturally led to an increase in guitar presence and six-string texture.

Mention of the rhythm section leads to the necessary comment of just how good a tandem Beau Barnard and Wayne Proctor were, and are; the pair dovetailed perfectly, most noticeably on the shuffle groove of 'Win You Over' (Ben Poole getting to lay down some extra licks in the absence of the keys).
The very nature of Ben Poole’s set and repertoire also allowed Beau Barnard to lay down some funky bass lines. 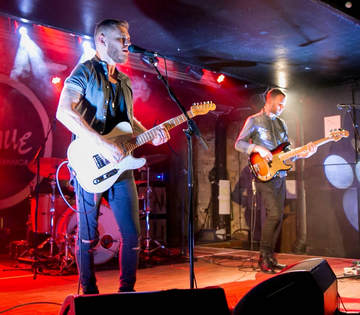 Wayne Proctor, for his part, was a living breathing metronome on the razor sharp beat and pulse of slow soul-blues number 'The Question Why' from Ben Poole’s previous album, Time Has Come.
On the other songs he wasn't so much on the beat as in the beat, and deep in the pocket.

'The Question Why' was one of a few songs that saw Ben Poole forego the tones of his favoured telecaster to get some squeals of blues delight out of his Les Paul, most evident on the ten minute version of 'Don’t Cry For Me.'

On album the latter has soft, soul-blues purpose; live it positively crackles with soulful energy, Ben Poole fully unfettered and in the expressive moment during his solo.

As strong and varied as Ben Pool’s songs are (from contemporary blues rock to soul-blues to the ultra-funky, rocked up live soul-pop of 'Let’s Go Upstairs,' the title track of his 2012 debut album) there’s always room for a cover or two.

This cover-time around it was Jude Cole's 'Start the Car' (a great fit for Ben Poole and Anytime You Need Me, where the studio version resides) and Poole's superb interpretation of the Freddie King classic 'Have You Ever Loved a Woman,' including his now trademark guitar intro and mid-song pick-ups off solo (the reserved and respectful hush during the pin drop moment leading to Poole’s cheeky but accurate comment "yep, it certainly isn’t Nice 'N' Sleazy!)

Set closer, the funkily grooved 'Anytime You Need Me,' has become quite personal to Ben Poole but it also, lyrically and musically, doubles as the number that allows him to express (in joyous and rampant tones on the extended solo finale) his gratitude at being able to play across the UK and Europe, doing what he loves.

Encore song, the pacey rhythm and funky blues of 'Stay at Mine,' brought to close an outstanding performance by a player who isn’t the most under-rated musician on the British blues rock circuit (certainly not by his peers, as Jeff Beck’s "fucking amazing!" affirmation so succinctly puts it) but who remains one of the most under-appreciated.

But anytime you need him, whether that be with a Jack Daniels at Nice 'N' Sleazy, a glass of the old vino at Oran Mor or with your favourite tipple at any number of venues across the UK, he’ll be there.