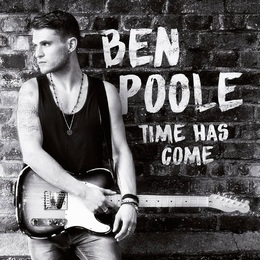 Ben Poole’s critically acclaimed debut album Let’s Go Upstairs and subsequent Live at the Royal Albert Hall set were both sit up and take notice releases.
​
But, good albums that they are, the over-polished debut buffed out the harder edges of one of Britain’s brightest and best up and coming blues rock talents while the live set’s inevitably rockier and rawer performances meant the subtler side of Ben Poole was posted Missing In Musical Action.

More accurately, both delivered only a facet of the diamond player Ben Poole can be.

On Time Has Come however Ben Poole has captured the best of both those musical worlds as well as showcased the breadth of his musical styles and influences, from rock and blues to pop and soul.

The songs also benefit from a live and uncluttered sound – thus avoiding the over-produced pitfall of Let’s Go Upstairs – but it’s a sound with a sonic warmth and intimacy courtesy of producer and King King drummer Wayne Proctor (co-producer of Stevie Nimmo’s outstanding and equally multi-faceted album Sky Won’t Fall, Proctor is a man who knows how to capture a groove on either side of the studio glass).

'Lying to Me' (which also features Todd Sharpville on guitar) is a song that shows Ben Poole can flex his tattooed muscles as well as any and put a groove in to the blues that’s very much his own – but this is a musician who is just as comfortable delivering classy blues-soul and lighter-framed soul-pop.

Excellent examples of the latter stylings include 'Longing For a Woman' (with rise and fall of soulfully arranged passages and a full-bodied, genuinely impassioned solo), the 60s styled, up-tempo guitar picking fun of 'Stay at Mine' and 'Whoever Invented Love,' an unashamed piece of blues-pop schmaltz, but a well-crafted and melodically presented piece of blues-pop schmaltz.

Nor is pop a dirty word when it’s part of a soul-blues-pop brace as charming and infectious as 'If You Want to Play With My Heart' and the funky little 'Just When You Thought it Was Safe.'

For all the strength in diversity of the self-penned material it wouldn’t be a Ben Poole set of songs without a fits-the-Poole-profile cover ('Tear Your Playhouse Down' on Let’s Go Upstairs being a case in covered point).
This time around it’s Mark Knopfler's 'I Think I Love You Too Much.'

While the tune never made it on to the final Dire Straits album On Every Street (an omission that merits a Public Enquiry), Jeff Healey’s version of the song was a true highlight of his 1990 album Hell to Pay.
Similarly, the performance of the song by Dire Straits at Knebworth that same year (with some bloke called Eric Clapton exchanging licks with Knopfler) has gone down in history as a classic Knebworth moment.

But Ben Poole does the song justice, throwing his more soul-driven vibe across the song and laying down some seriously tasty licks with a full-bodied tone that should have players such as Robert Cray nodding in appreciation.
The closing call and answer solos between Poole and guest guitarist Aynsley Lister, another British musician with blues soul sensibilities, is almost worth the admission fee on its own, as they say.

The one new track many Ben Poole and blues rock fans will already be familiar with is the slow rock-blues 'Time May Never Come,' a song Poole has featured in his sets since 2015.
Dedicated during those 2015 shows to Gary Moore (one of a number of guitar greats to have praised Ben Poole’s playing), the eight-and-a-half minute number has lost none of its atmosphere, passion or energy in the studio.

Building from a low-key, bluesy ambience and "tomorrow might be too late" lyric, 'Time Might Never Come' develops off a run of beautifully phrased melodic lines Gary Moore would have been happy to call his own to become a blues rock tour-de-force; Ben Poole delivers arguably his best solo to date as the number reaches the height of its melodic, emotive power.

Here’s hoping it also makes good on its title and that the Time Has Come for young Mr Poole – because it’s no more than his talents, and ability to produce such musical breadth across the melodic blues spectrum, deserve.