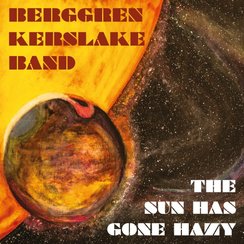 Stefan Berggren is perhaps best known for his early Millennium stint with The Company of Snakes, the blues-rock band formed by ex-Whitesnake guitar tandem Micky Moody and Bernie Marsden.

In BKB however Stefan Berggren’s blues-infused rock pipes have found an even better home; on The Sun Has Gone Hazy Berggren has put his voice (and none-too-shabby guitar work and keyboard touches) to some excellent, new material.

After a six year semi-retirement (having left Uriah Heep in early 2007 for health reasons) there was good news for classic rock fans when Lee Kerslake got himself back behind a kit for a number of live performances (most notably with Uriah Heep Legends) before getting together with Stefan Berggren for what would eventually become BKB with Berggren and Tomas Thorberg.

The even better news is Kerslake’s drumming is still as big and beefy as the man, his voice and his personality.

The band’s first release was Walk Tall, a five-track EP that was issued towards the end of 2013 and acted as a taster for the debut album.
All the tracks that featured on the EP appear on The Sun Has Gone Hazy but that’s no surprise given the quality of the material.

’Walk Tall’ was an excellent choice as a lead-off/ promotional number for the band and the EP; it also kicks off the album.
The song’s mid-tempo, bluesy rock swagger develops into a great slice of melodic blues rock and roll, in the mould of later-era Bad Company or early Whitesnake.
But the song also carries its own, vibrant sound and features some great harmony-guitar and six-string lead lines from Berggren.

By contrast ‘Super Sonic Dreem’ is a full-steam-ahead rocker driven by Lee Kerslake.
Recalling the drummer’s illustrious past, the song is a distant second cousin of Uriah Heep’s ‘Easy Livin’ in tempo, energy and short bursts of Heep-esque backing vocals.

’My My’ builds from an understated vocal and acoustic opening to blossom in to a song of many layers, featuring organ-keyboard runs and string-like keys that add to the atmosphere of the song.

But at the core of BKB and The Sun Has Gone Hazy lies a bluesy rock soul, typified by the title track’s pumping blues groove and the blues guitar notes scattered across the rocking blues of ‘Fools Asleep.’
"That's what I'm talking about!" shouts Lee Kerslake at the end of the latter. I concur fully, Lee.

’Free’ changes the pace for what is best described as a heavy-ballad with acoustic-based core while ‘As Time Goes By,’ one of the true highlights of the album, carries both the subtlest hint of country and a gospel-inspired musicality within the ballad’s framework.

'As Time Goes By' is further enhanced by guest musician and Opeth keyboard player Joakim Svalberg on organ, some lovely melodic note bursts from the guitar of Stefan Berggren and a short vocal bridge that features Lee Kerslake.
The latter also serves as a reminder of just how much a part of classic era Uriah Heep Kerslake’s harmony and backing vocals were.

The only weak moment on the entire album is ‘Rock N’ Roll Gangsta.’
The song does a decent enough impersonation of a slow swampy blues in a hard rock shell (and some moog lines from Joakim Svalberg) but it suffers from a clichéd, predictable chorus that doesn’t have the coolness or cheekiness of Johnny Guitar Watson’s classic Gangster (of Love).

But that’s the only criticism for an album that finishes with a fine brace of songs.
’Back on the Road’ puts the band back in the groove with another slice of melodically bluesed-up classic rock (and a hint of later 70’s Heep) before ‘Born Again’ slows things down, only to switch gears towards the end of the song for an up-tempo and feel-good finale.

There’s an earthy, honest quality to the material on The Sun Has Gone Hazy and "honest" might just be the best word to describe what BKB have produced.

Because this is honest rock and roll, from a trio that have clearly formed first and foremost due to their love of playing together.
The results are a musical chemistry that has delivered some incredibly strong material.

But how successful BKB will be is not going to be based on how good this album is, unfortunately.
It will be based on how much of a dent "honest rock and roll" can make in a re-imagined musical world of retro-rock, re-written Greatest Hits and classic bands becoming partially reformed brands at the drop of a hi-hat.

That said, based on the overall quality of The Sun Has Gone Hazy?
Messrs Berggren, Kerslake and Thorberg can look at what they have already produced… and Walk Tall.