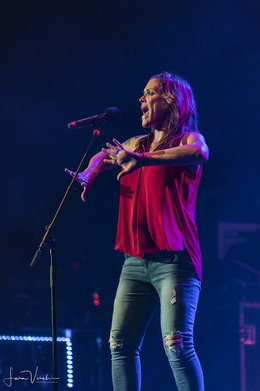 No one would deny that Beth Hart’s audience, fan base and album buying stock soared when she teamed up with Joe Bonamassa for the stand-out covers album Don’t Explain in 2011 (and follow up Seesaw); it certainly did her sixth album Bang Bang Boom Boom no promotional harm.

While such associations clearly help a career, the level of success attained can only be sustained if you have the talents to back it up and continue to musically progress.
In that respect the blues powerhouse that is Californian Beth Hart has nothing to worry about – her seventh studio album Better Than Home and current release Fire on the Floor saw healthy chart success in the UK and parts of Europe while the 2016 winter tour of the UK required routing through larger venues to accommodate ticket demand.

All of which meant the 02 Academy Glasgow crowd were on a guaranteed win before the show even started but it was a double victory for this reviewer and blues fan, given that Canadian musician Colin James was Special Guest on the tour.

​The unfortunate reality of the situation however is the multi-award winning singer songwriter guitarist (six times Juno Award winner and a remarkable seventeen Maple Blues Awards under his belt) has only been in the UK twice in his near thirty year and eighteen (fifteen studio) album career – meaning Colin James is so far under the radar here as to be a virtual unknown.

However the hope is that with his 2016 covers album Blue Highways starting make an impression, and his exposure on the Beth Hart tour, further and far more consistent UK appearances may be on the cards. 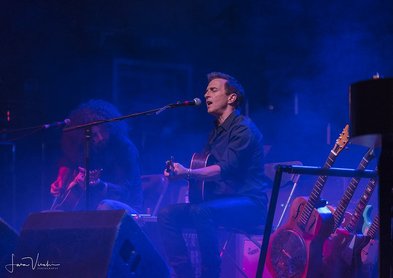 Officially Glasgow was the only non-sell out of the Beth Hart tour (but was as close to sold out as makes no difference) but the near capacity crowd were treated to an outstanding show and a perfectly weighted set-list from one of the voices of the modern blues scene.

Beth Hart clearly has an ever burning furnace in her diaphragm, such was her voluminous delivery on slow blues opener 'I Love You More Than You’ll Ever Know' (to the degree that she could have probably reached the back of the hall without a microphone); following the big voiced belt of the Blood Sweat and Tears number Hart’s sassy side took center stage for the R&B groove of 'Can’t Let Go' (the Randy Weeks song was the second of what would be six covers on the night).

There’s no question the chosen covers added further shades of blues to the near two hour proceedings – the pick of the bunch being Tom Waites’ 'Chocolate Jesus' (one of three Don’t Explain songs performed) – but it was the original material where Beth Hart truly shone.

The piano led 'Good Day to Cry' and Hart’s piano rendition of 'Woman You’ve Been Dreaming Of' were genuinely heartfelt, the band got their Gospel on for the uplifting, Beth Hart in full vocal cry 'Spirit of God' and musical contrast (but no less emotionally intense) was provided by the grungy, blues rockin’ 'Waterfalls' from the 37 Days album – the latter saw the singer leave the stage to walk through the audience in the company of husband Scott Guetzkow (the perfect chaperone, given that Beth Hart has made mention many times of just how important her husband is in her life). 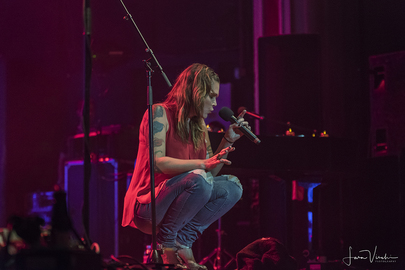 A mid-set change of pace came by way of a short acoustic interlude.
Beth Hart (on acoustic bass), in the company of the band’s excellent six-stringer Jon Nichols, delivered acoustic versions of the quirky 'Spiders in My Bed' (from Hart’s debut album Immortal) and Billie Holiday’s 'Fine & Mellow' before the lock down tight rhythm section of drummer Bill Ransom and bassist Bob Marinelli returned to the stage for a semi-acoustic take of the endearing 'St Teresa.'

The main set ended in swingin’ slow blues mode much as it had started, Beth Hart and band firing on all four cylinders for their cover of Ray Charles’ 'Sinner's Prayer.'

As if to prove just how comfortable Beth Hart has become in her own skin, dealing with bi-polar disorder, drug issues of the past and her self-confessed anxieties (Hart happily admits that the bold, confident on stage performer is not the same person as the off stage, "super sensitive" individual), the six song encore (which included a killer rendition of the feisty Fire on the Floor number 'Love is a Lie') featured four Solo at Piano numbers.

The personal anecdotes that introduced each solo performance made songs such as the already poignant 'Mama This One's For You' and the simple but elegant 'No Place Like Home' all the more emotive and all the more powerful.

Beth Hart, and others of her modern era ilk, will never be household names in the way pioneers or true legends of blues, jazz and pop became, such as Billie Holiday (one of the greatest ever and a clear influence on Hart).
But you won’t find many other singers who give of themselves, emotionally and vocally, to the degree Beth Hart does. Miss her at your peril.