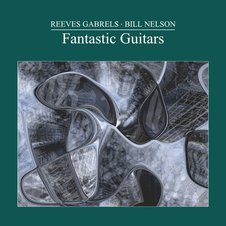 While there have been occasional collaborative projects in the past such as Channel Light Vessel and more recently The Last of The Neon Cynics (an audio & graphic novel combo with comic-book writer and artist Matt Howarth), in the studio record-a-holic Bill Nelson is the very definition of solo artist.

Since his Be-Bop Deluxe and Red Noise days Nelson has become a one-man band of creative, artistic and prolific force – to such a degree that even counting the numerous multi-CD sets as 'one album' releases and discounting the Nelsonica Convention CD’s, bonus albums and alternate/ re-released versions, Bill Nelson’s solo catalogue is seventy-plus albums strong.

But it’s another relatively rare collaborative project that is destined to become one of Bill Nelson’s most note-worthy – make that guitar notes-worthy – releases; and with good reason.

Fantastic Guitars features Bill Nelson and Reeves Gabrels, a musician whose avant-garde style and improvisational six-string skills make him as creative and musically diverse an artist as Nelson.

Gabrels, who has released three solo albums and joined The Cure as a touring member and lead guitarist in 2012, is best known for his work with David Bowie in the 90’s, including the rock band Tin Machine.

Bill Nelson and Reeves Gabrels have wanted to work together for a considerable number of years but busy and differing schedules kept the good friends apart musically until 2012, when recording for what became Fantastic Guitars started at Bill Nelson's home studio.
Recorded over two years (sessions usually only occurring a couple of days at a time), the results are an entertaining and enjoyable collection of melodic, ambient, sharp, angular, quirky and sometimes humorous instrumental creations.

All the songs are credited as Reeves Gabrels/ Bill Nelson compositions but some tracks are clearly built from the musical mind and textures of Bill Nelson, presenting the perfect canvas for Gabrels and Nelson to throw their sometimes complimentary, sometimes contrasting, but always perfectly weighted six-string colours across.

For example the title, sound and electro-fun style of opener 'And the Train Left the Station Trailing Sparks' could only have been conceived in the land of Nelsonica, but peppered with chiming, melodic and distorted back and forths from the Fantastic Guitars of Reeves Gabrels and Bill Nelson.

The opening number also perfectly complements the comment by Gabrels in the sleeve notes that Fantastic Guitars is "a series of conversations between two friends masquerading as songs."

As the album continues, those conversations get more interesting.
'Infernal Apparatus' is short and sharp rock and roll meeting melodic guitar distortion… rhythmic splashes of cymbals support a shower of guitar notes on 'A Brilliant Night For Rain'… "(Don’t) look behind you!" in musical form comes in the sinister and stark spectral shape of 'Ghosts Behind Glass.'

Not that the more traditional rock guitar instrumental or melodic guitar fusion is posted missing.
'Revenge of The Coda Kings' would not be out of place on a Joe Satriani album while 'Honeybee In Autumn' has a Steve Vai "7th track" melodic ambience (Vai has a habit of making the seventh track on his albums the most emotive or melodically charged piece; curiously 'Honeybee' is also track seven).
But 'Revenge' and 'Honeybee' also provide quirkiness, strangeness and charm, recurring themes in Bill and Reeves excellent adventure.

Nelson and Gabrels also get to show off an individual musical trait or two.
'Ambiguity' is a sound bites and sonic rock construct that has become something of a Nelson trademark while 'Orange Turning Blue' is the spaciest number on Fantastic Guitars, leaving plenty of room for treated guitars to dart in and out of – the perfect playground for a musician such as Reeves Gabrels.

'Santos' threads a little South American Latin swing through its guitar fusion before an up-tempo brace bring the album to a conclusion – 'Radio Andalusia' is another Satriani styled number that allows the guitarists to rock out a little before the title track, featuring sci-fi touches, big guitars and a Bill Nelson style outro, closes out the album.

Considering this is the first collaboration between Bill Nelson and Reeves Gabrels Fantastic Guitars still manages to sound exactly as you would expect from a pair of like-minded musicians who put artistic creativity before commercial considerations – a kaleidoscope of musical colours and guitar patterns that range from the musically sublime to the ridiculously fun.

While some 750 words hopefully convey the strengths and charm of Fantastic Guitars, the last words should go to Bill Nelson, who signs off the sleeve notes of the album by stating "It is ‘six-string cinema,’ a paean to the passion we both have for the guitar and the magic of music."

Long may that magic continue.


The following audio sampler is presented to accompany the above review and promote the work of the artists. No infringement of copyright is intended.