Rewriting their own history
Black Sabbath - 13 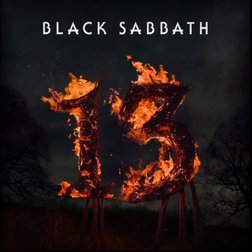 “What is this that stands before me?”

According to the album title and track listing it’s 13, the long-awaited studio album from Black Sabbath and first to feature Ozzy Osbourne, Tony Iommi and Geezer Butler for thirty five years.

But based on ‘End of the Beginning’ and the subsequent seven tracks, it could also be a musical homage to Black Sabbath circa 1970 - 1975.

It’s as if the mixed results of Technical Ecstasy and the much maligned Never Say Die! never happened – in Sabbath’s alternative doom-metal time and riff-laden space 13 becomes the natural follow up to Sabotage, the last classic Sabbath album of the Ozzy Osbourne era (and one of their finest ever releases).

The opening statement of this review, as every heavy rock fan and his aunty knows, is also the first line from ‘Black Sabbath,’ the track that almost single-handedly invented heavy metal and kick started the band’s celebrated career.
It’s also about the only thing missing from 'End of the Beginning' which, to all intents and purposes, is a rewrite of 'Black Sabbath,' right down to the spacious, doom-laden power chords, quiet and questioning first verse and a faster-tempo section that starts with a trademark Tony Iommi riff.

’God is Dead?’ was made available as a single before the album was released and is a brooding, slow-tempo affair with a later sequence reminiscent of the driving rhythm from ‘Hole in the Sky.’
’Loner’ also carries a DNA thread of earlier Sabbath but for the most part it stays on the vanilla path of mid-tempo, hard and heavy rock.

’Zeitgeist’ is an interesting change of pace but is so close to ‘Planet Caravan’ from Paranoid (including acoustic guitar, bongo percussion and ethereal atmosphere) it could be Son of Zeitgeist or Zeitgeist Part 2.

But then 13 unashamedly and intentionally draws its inspiration from Black Sabbath’s initial six-album run and Ozzy Osbourne confirms as much on ‘End of the Beginning’ with the line “reanimation of the sequence rewinds the future to the past.”

’Age of Reason’ is too ponderous for its own good (suffering from being overly long) while ‘Live Forever’ is a shorter and more effective riff-driven slice of heavy Sabbath rock.

And so the album continues with only a couple of gear changes until arriving at the heavy blues of ‘Damaged Soul’ and culminating with the slow riff and grunge of ‘Dear Father.’
Perhaps the strongest song on the album, ‘Dear Father’ tells the all too familiar and perverted tale of the wrong type of laying on of hands before thunder, pouring rain and a very familiar tolling bell fade the song to black, Sabbathly speaking.

Despite a drink and drug relapse that lasted a year and a half Ozzy Osbourne has been sober since March of this year and on 13 the singer delivers vocal enunciations and trademark “Oh Yeah!” interjections as only he can.
But then it’s Ozzy Osbourne – you already know what to expect.

Tony Iommi has been dealing with lymphoma since 2012 (and the ongoing, successful treatments) but he can still riff with the best of ‘em and lays down solos that fit the 13 song template perfectly.

Geezer Butler anchors or drives the sound as each song requires and delivers bass riffs alongside Iommi’s six-string phrasing as if 13 was, indeed, the follow up to Sabotage.

The other major players are drummer Brad Wilk of Rage Against the Machine, replacing original sticksman Bill Ward, and producer Rick Rubin.
Wilk knows his way around a drum kit but on 13 is fairly pedestrian, primarily because the song structures don’t lend themselves to freedom of percussive expression or many drum fills.

But it’s a shame band and management couldn’t come to a contractual agreement with Bill Ward (or he couldn’t commit for whatever reason, it depends what story you read/ believe), because his swing-drum style might just have added a little extra ingredient to the arrangements.

Rick Rubin has done a solid job and his trademark ‘stripped down’ production sound is perfect for Black Sabbath and 13.
There have been comments that the album has been mastered too loud and grates at higher volumes (ironic for a Black Sabbath album) but that’s poor mastering, not Rubin’s production.

But the biggest negative isn’t the mastering of 13 – it’s the marketing of 13.

The standard 8 track, 53 minute album is also available in Deluxe 2CD and extended digital formats, containing three "exclusive" bonus tracks.
But they are, more accurately and honestly, nothing more than unnecessary and sadly typical ploys to pull in the ‘must have it all’ fan base.

The predominately mid-tempo ‘Pariah’ and ‘Peace of Mind’ don’t bring anything new to the 13 song base, but the fast-paced and semi-sinister ‘Methademic’ would have added an edge to what should have been an 11 track, 68 minute album.

The majority of fans will love 13, instantly placing it alongside Paranoid, Volume 4, Sabotage, et al.

Some however will hate it, hearing only a lazy rewrite of Osbourne, Iommi and Butler’s shared musical history.

But you certainly can’t ignore it.