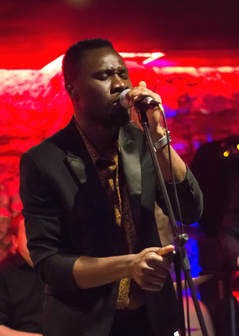 The track itself, built around a cool, funky tempo, starts with a short spoken opening which recalls the intro to 'Hey Blue' by The Tony Rich Project (very different songs, but no bad comparison, by any means).

There’s also a soulful and sexy lyrical confidence to 'Fancy Man' in the style of classics such as James Brown’s 'Get Up… Sex Machine' and Clarence Carter’s 'Strokin’ - the smooth, deep vocals of Emmanuel James Mathias telling of how his woman confirms he’s a fancy man who "takes care, and looks good," further declaring that "no-one does it better than you, no-one’s even near," which has this fancy man declaring he is exactly that.
You have to love the cocky confidence of this song.

Add to that the awesome beat and groove provided by Stuart Spence (drums) and Chatonda Ridley (bass) and the fantastic guitar playing of Louis Crosland and you have not just a Fancy Man but a fancy little number.

Louis Crosland also celebrated his birthday on the launch night with a cake presented by his mother (it was, granted, a few days early).
I was impressed by this young man’s guitar playing when I saw the band support Finnish blues artist Erja Lyytinen at The Caves last September; a seemingly natural style of player, Crosland really showed his chops on the cover of Stevie Wonder’s 'Superstition,' mixing extended improv with traces of Hendrix.
The same number featured some great keyboard playing from Guilhem Forey, who ensured the song was delivered with the justice its classic funk-pop status deserved (and in impressive 'paying tribute' style, such a part of Bourbon Street 5’s cover performances). 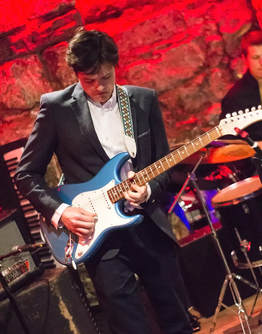 Louis Crosland
On the subject of covers, Bourbon Street 5 had a lot of them in the set-list, certainly more than when they played support to Erja Lyytinen, but that was possibly a deliberate move to let the newly released track showcase itself as an original number while the audience (a packed out crowd from front of stage to the bar at the back) sang along and danced to material they were more familiar with.
All of which made for a party atmosphere and job well done in that regard; the band held the crowd’s attention throughout the set.

And this band performs so well live that whether they deliver a set of all new material, or just covers, is somewhat irrelevant.
Secondly, a cheap launch gig ticket to see Bourbon Street 5 perform to this high standard, along with a great supporting covers band in the shape of Edinburgh newcomers Temporary, is a bargain of a night out however you care to slice it.

That opening band, Temporary, feature a seventeen year old female singer by the name of Eilidh Vaughn.
A young lady with a beautiful voice and despite being, thus far, a covers band, Temporary performed those covers 100% their way with Eilidh Vaughn’s vocals providing a soulful addition to each song.

Temporary are just getting started, so there’s no real on-line presence as of yet, but they certainly impressed with how polished they already are.

For fans of funky and soulful blues-influenced music I highly recommend you catch Bourbon Street 5 sometime soon… they are playing Edinburgh’s Stramash venue on the 1st of June so get along.
I’ll be the one in the pork pie hat taking photos and dancing like the grandad I am (but funkily loving it all the same).