A rain soaked Monday night in Glasgow became a bit of a metaphor for Birmingham based Blue Nation and their short-circuited special guest slot in support to Brian Downey’s Alive And Dangerous at the Cathouse club in Glasgow.

Technical issues meant the band had to sound check while the crowd was gathering within the club venue; further confusion ensued as the audience ventured nearer the stage, as the band kicked into a song, believing Blue Nation had started their set.

In actuality it was the final part of the sound check, which ended with the band downing instruments and departing for the dressing room, reappearing a few minutes later to kick off the night’s musical entertainment. 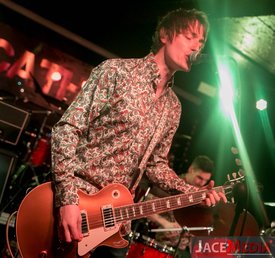 Neil Murdoch, shortly before his pre-amp gently wept
Which would have been fine if there were no more glitches but two and a half songs in, having caught the attention with swaggering, soul-rock fuelled opening number 'Slave' and the punchy 'Melody' (both from last album Steady Your Soul) before seguing to their cover of 'While My Guitar Gently Weeps,' singer and guitarist Neil Murdoch’s pre-amp gave up the ghost.

​Cue much crew running about, consternation and a very lengthy re-build (there goes most of your set time, boys) while the band, following some spot-on harmonies from Neil Murdoch and bassist Luke Weston on the George Harrison classic, continued the number as an extended instrumental jam work-out between Weston and drummer Chris Bloor.
​
Blue Nation deserved far better luck on the night to showcase just what they can do, but even on their severely shortened set it’s clear it will be worth checking out new album The Kaftan Society when it’s released at the end of November. 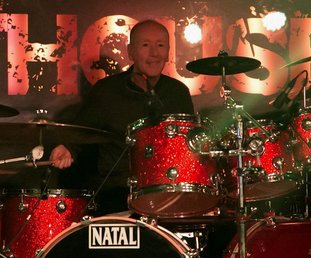 While Blue Nation had a bad night it’s hard to conceive of Brian Downey’s Alive And Dangerous having a better one.

​The ovation for Brian Downey as he walked on to the stage nearly took the roof off the Cathouse but when the 'Jailbreak' voiceover intro echoed to fade and the power chord that introduced the song proper kicked in, the fully Lizzyfied crowd gave it plenty. "Tonight there’s gonna be a breakout..." and indeed there was.

Make no mistake however, Alive And Dangerous are far more than an official tribute act – this is a highly proficient outfit that are tight as the proverbial, powered by one of the great unsung heroes of 70s and 80s classic rock (who still hits as hard as he did back in the day and double-beats down on the bass drums as well as any).

Front man Matt Wilson doesn’t just look the part, he has a vocal tone and timbre naturally similar to the late Phil Lynott; he doesn’t have to force the tricky inflections and trademark staccato Lynott phrasing.

Guitarists Brian Grace and Phil Edgar are outstanding players who also complement one another and dovetail extraordinarily well (a pre-requisite if you’re going to do justice to Thin Lizzy’s twin-guitar, classic era past).
​
Nothing more need be said about the ability of Brian Downey; suffice to say his featured moment on 'Sha La La' matched his thundering and rapid fire drum solos from Thin Lizzy shows long-past.

While the hard rocking Lizzy anthems burned brightly, driven by the man at the back and the pumping bass lines of Matt Wilson ('Emerald,' 'Warrior,' Bob Seger’s 'Rosalie' and the classic back-to-back salvo of 'Cowboy Song' and 'The Boys are Back in Town' were obvious crowd winners and fan pleasers), it was the lighter moments that really shone.

'Southbound,' with the crowd in full vocal cry, featured Brian Grace and Phil Edgar in perfect six-string harmony.
'Still in Love With You,' arguably the stand-out of the night, both showcased Matt Wilson as well-rounded vocalist (and not just a Lynott-a-like) and the solo chops of the two guitarists.

The 'Still in Love...' solos were based on the classic live deliveries from Brian Robertson and Scott Gorham but Messrs Grace and Edgar managed to infuse them with their own style while honouring the original parts.
That's quite the six-string trick and a sign this band could be a weighty proposition with their own material (something that could be on the cards next year, the band having already laid down a few demos). 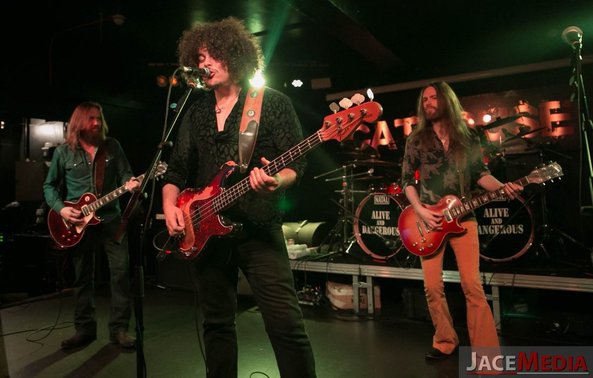 Brian Downey and his boys – Brian Grace, Matt Wilson, Phil Edgar – back in town to keep the
Thin Lizzy legacy alive and sounding dangerously close to the original.

The set-list on the night pretty much followed the track sequencing of the original Live and Dangerous with a couple of change-ups and a song-switch-a-round.
A highly charged rendition of 'Are You Ready' kicked in after 'Jailbreak' while a one-two finishing punch of 'Don’t Believe a Word' and a particularly sizzling 'Suicide' closed out the main set.

The one noticeable omission was 'Baby Drives Me Crazy,' replaced by the only post Live and Dangerous/ Bad Reputation song to feature, 'Got To Give It Up,' from Black Rose.

Opening the three song encore, 'Got To Give It Up' was particularly poignant on the night, primarily because Matt Wilson was so vocally close to Phil Lynott you could have believed he was channelling the great man’s voice on a lyric that was, sadly, a foretelling of Lynott's gone-too-soon downfall.

The pace and energy was lifted for the ensuing 'Bad Reputation' and 'The Rocker,' which completed an electrifying set from an outfit who, in a relatively short time, have established themselves as the band to honour the Thin Lizzy legacy.