A successful border raid
Broken Witt Rebels – King Tuts, Glasgow, 30th June 2016
When one of the brightest and hottest young talents in British blues rock make the effort to cross north of the border in to uncharted gigging territory, you can only hope fans of the Broken Witt Rebels and lovers of live rock music come out to lend their support.

Unfortunately it was a half-full King Tuts that welcomed the Birmingham based quartet to their first ever Scottish appearance, but it was also a school night gig on one of the wettest evenings of an unpredictable June.
When you also factor in the number of potentially interested blues fans whose priority was the sold-out Buddy Guy concert just along the road at the Glasgow Royal Concert Hall, a half full attendance starts to equate to a not half bad attendance.

Leading off with the contemporary edged groove and bluesy mid-tempo swagger of 'Low' from current release, the Georgia Pine EP, the Broken Witt Rebels went on to deliver a blistering, high-energy, gave-it-their-all ten song performance.

The well balanced and perfectly pitched set (restricted to forty-five minutes as it was a four band night; something of a venue trait) sent the audience home happy and hopefully started a word-of-mouth ripple effect that will see these Rebels play to a far larger crowd next time they are in the locale (and their Special Guest slot on King King’s November UK tour won’t do them any harm).

The Georgia Pine EP songs unsurprisingly featured heavily; four of the EP's five numbers were given an airing with current Pine single 'Guns' an obvious highlight (the song, a chunky and funky piece of up-tempo, ska-chord driven rock, has an astonishing 440,000+ official video YouTube views to its name).

Newer numbers also featured in the set and each bodes well for a full-length debut that’s already being hotly anticipated (but kudos to band and management for taking the slow, steady and purposeful approach towards such a release).
Of the three new numbers 'Turn Me On' made the biggest impact, primarily because it was as pure a blues number as the Broken WItt Rebels have yet performed; it complemented and played foil to gutsier numbers such as 'God Knows' and 'Come On Over.' 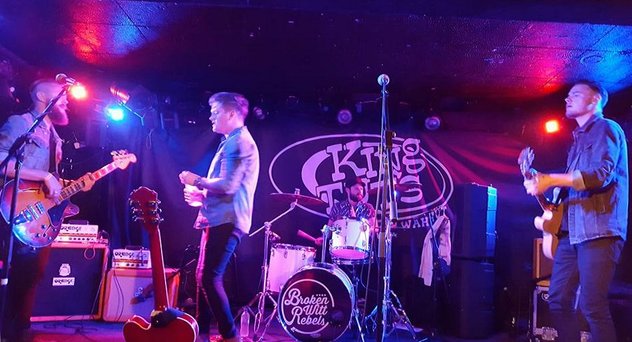 King Tuts has a reputation for showcasing new talent and / or hosting the first Scottish gig by many
up and coming bands. The Broken Witt Rebels (l to r: Luke Davis, Danny Core, James Dudley, James              Tranter) added themselves to that list with an impressive set on their first across the border show.

Previous EP Howlin’ also featured by way of 'Cloud My Day' and a full-on version of the punchy title track. Both numbers carried the band’s trademark, sonically thick sound even although a technical glitch in the early going put the guitar pedals and their boosting effects out of action (the fact hardly anyone else noticed is a testament to the four and six string talents of Luke Davis and James Tranter, respectively).

But the pedal issues were the only hiccup of an otherwise outstanding set; the aforementioned Davis and Tranter were on fine form, drummer James Dudley’s rhythmic grooves and sharp beats powered the songs along and front man and rhythm guitarist Danny Core, as is the case every time he steps up to a microphone, gave it his vocal all.

​Many have made comparisons between the Broken Witt Rebels and the Kings of Leon (FabricationsHQ included) and while there are some shared musical traits it’s the striking vocal and tonal similarities between Danny Core and Leon front man Caleb Followill that truly merit such comparisons.

While a larger crowd had been anticipated, and what the Broken Witt Rebels deserved, the performance and audience reaction made it a loud and clearly successful across the border raid.

It was also a great two-and-a-half hour's entertainment for those that did turn up; additional to the unarguable quality of the Broken Witt Rebels was the gimmick-rockabilly blues of Glasgow’s The Black Denims, some seriously impressive all-original AOR/ pop-rock material from Alex Wayt and band (Wayt also fronts Glasgow’s high-quality covers band The Lockhearts) and a solid set of Poco-esque Americana blues from Lanarkshire’s The Austins.

The latter, sadly, played to more empty plastic beer tumblers than they did punters but that’s the inevitable downside to a late slot after the featured act has performed and much of the audience has left to catch public transport home. You deserved far better, boys.