Blues, sweat and cheers
Roadstars (Broken Witt Rebels, Bad Touch) - O2 ABC2, Glasgow, 18th March 2017
On a Saturday night, in the heart of Glasgow’s city centre, you might have expected a bigger rock based crowd than the third of capacity audience that attended the 02’s ABC club venue to see the Broken Witt Rebels and Bad Touch, two of the brightest up and coming young bands on the UK’s blues rock circuit.

The upside to the downsize in crowd numbers is such club shows become intimate and personal affairs with their very own atmosphere and a reciprocal arrangement where any band who truly delivers and gives 100% will get the same from a Weegie crowd (or, as Rebels front man Danny Core noted half way through the Birmingham band’s set, "you guys are always seriously up for it!").

At Glasgow it’s the turn of Bad Touch to open the Roadstars double bill (the bands' alternate each night).
The Norfolk based quintet unsurprisingly base the set around second and current album Truth Be Told, the stand-out follow-up to Half Way Home ('Wise Water,' a southern fried 'n' slide guitar number, is the pick of the four debut album numbers performed).

Led by the voice and charismatic character of front man Stevie Westwood (his flamboyant dress sense garners the best straight-to-the-point quip of the night: "yer shirt… gie’s it!"), Bad Touch deliver southern rock meets western outlaw musicality with a nod to British classic rock and a dash of the Black Crowes.

It’s a mix that works, and works well, made all the stronger because Bad Touch have the chops and songs to back it up – the spacey and swaying 'Waiting For This' has that Zeppelin touch… the contemporary-meets-classic rock of 'My Mother Told Me' includes a chunky rendition of 'Hard To Handle' (giving the crowd an opportunity to launch into vocal action)… the take-a-load-off 'Take Your Time' brings it down and drops the tempo… 'Outlaw' cranks it all the way back up again in a bristling, mid-tempo tale of the bad boys of the old west. 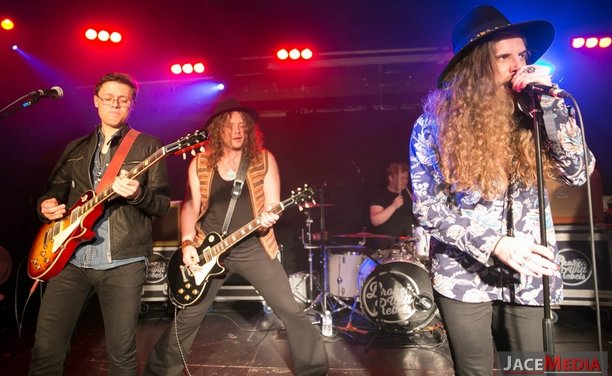 It’s not just the songs that work well on the night; special mention must go to latest recruit Harry Slater.
The twenty year old lead guitarist looks fifteen but plays lead guitar like a veteran, firing off a blistering run on the fretboard one minute and delivering a fluid melodic lead the next (nor is he too shabby when it comes to slide work).

'99%,' the band’s ridiculously infectious slice of sing-a-long rock and roll and 'The Mountain,' a poignant heavy rock blues for the planet (with a quick-fire blast of 'Moby Dick' as its finale), closed out the set in scintillating style.

​It’s been the rise and rise of the Broken Witt Rebels over the last eighteen months or so, courtesy of their excellent Georgia Pine EP (featuring the single 'Guns,' the video version of which has amassed a staggering 450,000+ YouTube views), audience broadening supports touring with King King and Joanne Shaw Taylor and being awarded Best Rock Act at the inaugural Unsigned Music Awards in 2016.

Tonight’s show underlines why they are tipped as the next best thing in blues rock, although that’s a label that needs to be shown the stage door because, as hinted at on Georgia Pine and fully realised through the newer numbers, this is one of the most individual sounding rock acts currently performing.

Broken Witt Rebels have an alt-rock vibe not too far removed the Kings of Leon (heightened by Danny Core’s similarity in vocal timbre to Leon front man Caleb Followill) but with a contemporary swagger that encompasses choppy ska chords, power rock, plenty of melody and the blues.
The sum of those parts is a whole dose of originality from Danny Core, James Tranter (guitars), Luke Davis (bass) and James Dudley (drums).

The chain gang sing-a-long sway of 'Low' and the rapid fire Indie-rock of 'Guns' opened and closed the main set of a band that give their absolute all every time they perform (by second song in Danny Core is drenched in sweat, he gives so much of himself) – these are four Rebels with a cause and more than a clue in how to deliver. 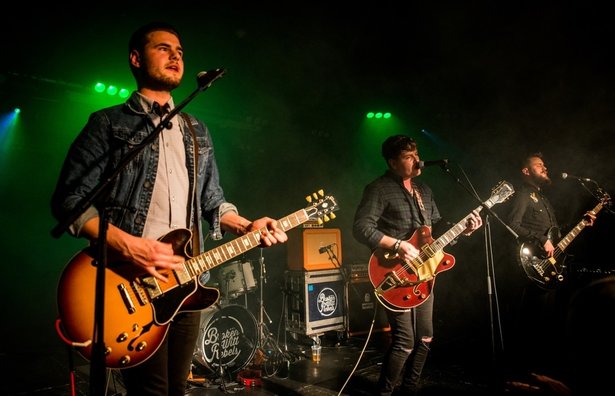 Strong as those Georgia Pine numbers were (the title track is another highlight) it’s the clutch of new songs that truly make a mark.
Each is the equal of the Georgia Pine material and in a number of cases a clear step up, from the blues soaked 'Turn Me On' to the commercial appeal of 'Hurricane' and on to the sparks flying rock of 'Snake Eyes' and the heavier 'Bang Bang.'

Encoring with 'Shake Me Down' from their 2014 Howlin’ EP the Broken Witt Rebels leave the stage to an appreciative vocal racket that belies the crowd size – which returns us the opening remarks of this review.

One of the reasons Glasgow club audiences have diminished of late is the mainstream media won’t promote such events or give it any page space (trust me we’ve tried; there’s many a PR company or promotional agency who have offered interview opportunities, press kits, free tickets and probably thrown in a kitchen sink to the mainstreamers, but to no avail).

A secondary issue is there is still many a rock fan who would rather pop in to a free gig by a covers band in a bar venue where they can hear all their favourite classic rock songs of the past, rather than support the future.

Fortunately bands such as Broken Witt Rebels and Bad Touch have pledged to return whenever and wherever possible, such is their love of playing Glasgow.

That’s a stance that should be heartily applauded – by, hopefully, a far bigger audience next time.