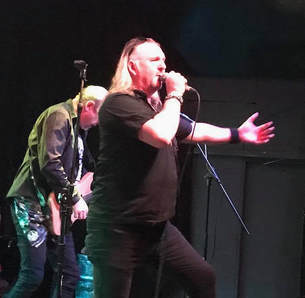 School night club gigs are tricky ticket selling buggers at the best of times but when you factor in a fairly late, one-off gig announcement and then a change-of-venue at close to the eleventh hour, it becomes a bit of a gamble.

Such was the reality of the situation for Burnt Out Wreck, but it was a gamble that paid off – the Audio wasn’t ever going to be a sell-out but it did provide the opportunity for a showcase gig that reinforced just how good the band are and why they have some significant support slots and a couple of festival appearances under their belts.
​And all in a very short time.

For those that may be unaware, Burnt Out Wreck are fronted by Gary Moat, most famously the drummer and primary songwriter of Heavy Pettin', the highly successful (if relatively short-lived) Scottish rock-metal export of the 80s.
More recently Gary Moat could be spotted with previous project Mother’s Ruin; the band were resurrected in 2013 by Moat and featured the now Burnt Out Wreck guitarist, Adrian Dunn.

It’s a partnership that works extremely well.
Lead six-stringer Dunn and Moat, now front (man) and centre with a high-end delivery that recalls Bon Scott and Marc Storace at their rangiest, deliver the front-line goods while the highly animated Miles Goodman (it should be illegal to enjoy yourself this much on stage) adds thick, muscular rhythm guitar to the sound, all underpinned by the solid and ultra-reliable rhythm section of Alex Carmichael and Paul Gray.

Alex Carmichael, who swings in time to the music as he swings those big bass notes, is well-known to many a Scottish rock fan as a member of La Paz (the band project of renowned Scottish singer Doogie White); Paul Gray is a highly technical drummer (and drum teacher) who, luckily for the likes of BOW, loves to play rock.

The band are still in their relative infancy but getting some notice through their attention grabbing, old school hard rock debut Swallow, a select smattering of dates across the UK (including supports to Y&T, Faster Pussycat and Focus) and an extremely well-received spot at the Hard Rock Hell Festival.

At the Audio however it wasn’t just a showcase for the album, it was a showcase performance, confirmed loudly and clearly by the noise made by those who had popped along to the club venue to hear and see what all the great band, great album fuss was about.
And considering this was only their sixteenth gig they were one seriously cohesive unit (leaving many a more established act in their water-tight wake); each member dovetailed perfectly (chemistry is clearly as important to Gary Moat as musical ability) and collectively delivered in the fashion of a band that’s been performing together for a lot longer than they have.

The album was featured in its entirety, but as each and every song works well live (clearly an intentional songwriting consideration and decision by Gary Moat – studio vibrancy, live energy) that decision was more than merited.
Right from the get-go the quintet were on point and on form, with the band’s theme song 'Burn Out Wreck,' a guitars up front, mid-tempo rocker that features a hook chorus and the best thirty second intro the Scorpions of the 80s never did.

What followed was a whole does of good time, hard rockin' attitude from Gary Moat and Burnt Out Wreck, from the album's AC/DC influenced title track (with an unsubtle lyric squarely aimed at the powers that be and their continually spouted truth-avoiding spin) through to the 80s rock sound of 'She’s the One' and 'Medusa' and back to the earthy rock 'n' roll honesty of the previous decade, exemplified by the rock swagger of 'Flames' (featuring an appropriately fiery solo from Adrian Dunn).

For contemporary contrast to the 70s and 80s inspired material there’s the rock and bluesy roll of 'Rockingman' and the southern tinged, heavy ballad 'Your Love (Is All I Need').
The latter was the highlight of the night, perfectly complementing the hard hitting rock and roll that dominates Swallow.

The band finished with a quick, time-for-one-more rendition of the Heavy Pettin’ anthem 'Rock Ain't Dead.'
The punchy delivery and forceful big-beat of the number confirmed that, through bands such as Burnt Out Wreck, the song's title is an accurate one (punctuated by Gary Moat’s ad-lib delivery of "rock ain’t dead… while I’m alive!" reinforcing his intentions to make a serious go of this). 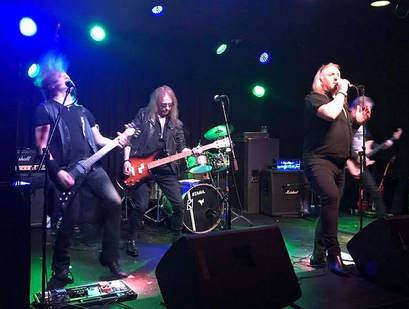 Burnt Out Wreck and debut album Swallow unashamedly take their major influences and lead from the High Voltage rock and roll that used to be the order of the day.

But both band and album sit firmly and squarely in the present, delivering a brand of unpretentious and honest rock and roll untouched by political correctness or what the musical flavour of the month may be.

Gary Moat is already writing what he believes are even stronger songs for the second album, they have dates locked in for a year away and, as Moat confirmed post-gig to FabricationsHQ, there have even been tentative enquiries made to the band for as far ahead as 2019.

They are also, unquestionably, a band geared for large audience and festival performance, with the ability to make their high-energy mark in front of any rock crowd.

Given the performance level witnessed at a relatively low key club gig in Glasgow on a cold November night, that shouldn’t be too hard to Swallow.