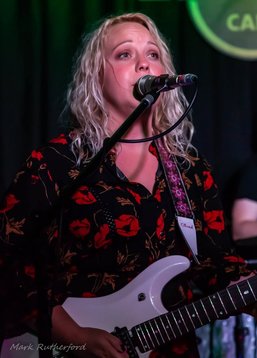 That there was any sort of crowd for Chantel McGregor’s return to Glasgow, let alone a gig at all, is credit to Shock City Promotions who had to take over the reins and almost re-promote from the ground up when Miss McGregor’s originally booked 02 ABC2 show was wiped out by the fire that gutted Glasgow’s School of Art and seriously damaged the adjacent 02 ABC building back in June.

But a gig and a highly appreciative crowd there was for the Yorkshire lass, whose petiteness of height belies her towering presence as a live performer and stature as a guitarist and creative songwriter, one that deserves to be heard and recognised well beyond the confines of the British and European blues rock club circuit.

Before Chantel McGregor and her band – bassist Colin Suttton and drummer Ollie Goss – took to the stage, the Hard Rock Cafe crowd were treated to a blues rockin’ set from a band that are "well kent" in these here parts…

The Brian Rawson Band don’t need any introduction to blues rock fans around Glasgow and further afield, having plied their trade in fine covers and originals fashion (their rocking rendition of 'Rollin’ and Tumblin', the rhythm and bluesy fun of 'Bad For Me') for a number of years, guaranteeing attention grabbing sets wherever and whenever they play.

The problem, however, is a number of personnel changes over the last few years have curtailed any chance of creating a true chemistry within the band or a definitive sound, other than Brian Rawson’s consistently smooth six-string tones and his genuine feel for the blues (his tasteful remarks on the band's cover of 'Sitting On Top of the World' are the perfectly played example).

But with what seems to be an established core of Rawson, vocalist Peter Scallan (the big voiced singer also fronts Moritz and Chris Glen's band, The Outfit) and keyboardist Alan Hearton (whose complementary playing brings a fuller sound to the band), they are now in their strongest position in terms of line-up, original songs and being able to deliver a much anticipated studio album (expected in the first quarter of 2019). 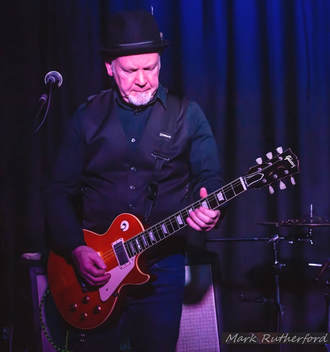 Brian Rawson - smooth tones, cool hat
Joining the band at the Hard Rock Cafe were bassist Paul McElroy of Gallus Cooper (the UK’s premier Alice Cooper tribute band) who stepped in at the eleventh hour to help out.
McElroy’s pumping bass lines were the perfect rhythmic complement to the new man at the back, Todd MacLeod, whose big beats and attack gave the songs extra bite.

Todd MacLeod's contributions were particularly noticeable on songs such as Foreigner meets Bad Company number 'Coming Back to You' (with tasteful keyboard intro from Alan Hearton) and the beefy beats that powered 'Double Heart Trouble' (based on Frankie Miller’s hard rock arrangement, not Andy Fraser’s funkier original).

In summary, on this performance (and a sighting by FabricationsHQ earlier in the year when the Brian Rawson Band supported Sari Schorr) – get that album out as quick as you can, boys.

Southern Gothic inspired blues rock and a West Yorkshire, Bradford born lass might not seem the perfect musical match but when its Chantel McGregor, an exemplary guitarist who has developed from melodic blues to a more progressive, contemporary blues rock sound, it’s a perfect mix that combines the gritty, blues-edged songcraft of 2015’s Lose Control with McGregor’s softer vocal style (she can holler when required though, as heard on the "raise your glass!" cries to the hell raising and blues rockin’ gal who features on 'Southern Belle').

There is another side to Chantel McGregor – the acoustic performer who can keep an audience captivated with her her always interesting solo sets featuring various covers that range from the Stevie Nicks songbook to Metallica’s 'Nothing Else Matters.'

On this Glasgow night however Chantel McGregor and her band were on full Southern Gothic, amps up and Lose Control mode right from the get-go, with the one-two punch of the well-titled 'Take the Power' and the bristling, riff rockin’ 'Killing Time.'

Even 'Caught Out,' from debut album Like No Other, exchanged it’s middle eastern motifs for heavier clothing, putting it slap bang in the American South alongside its Lose Control cousins.

'Inconsolable,' a song that features in many a Chantel McGregor set, started fairly faithful to American folk & rock singer-songwriter Jonatha Brooke’s original, but the acoustic guitar was soon swapped for the electric, leading to an extended and free flowing instrumental section where McGregor lost herself in ever-rising guitar cries and howls while Colin Sutton and Ollie Goss kept one ear on their rhythm and one eye on their leader to see where she might go next. 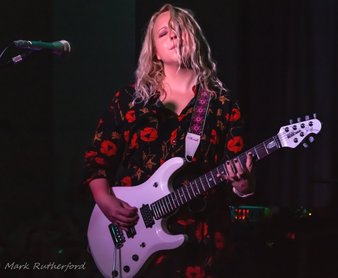 Chantel McGregor - deep in the the Eternal Dream
Ever the improviser, songs such as 'Inconsolable' and highlight of the night, 'Eternal Dream' (which shares musical DNA with the late Jeff Buckley) allow Chantel McGregor to extend the numbers well beyond their original form and take them down a more progressive, blues-fusion road (and almost guaranteed to be presented slightly differently each time they are set-listed).

Outside of such improvisational skills and the associated interplay between the three musicians, the Lose Control showcase continued through the fittingly fiery 'Burn Your Anger' and final song of the night, 'Your Fever,' a grungy slice of blues with interesting melodic threads.

Lose Control songs may still dominate the set-lists but newer material has also featured over the last couple of years – 'April,' a lengthy instrumental fusion blues jam that showcases Chantel McGregor’s fret-burning chops, is likely to feature on the third studio album, scheduled for a 2019 release.

It’s hard to describe in words just how good Chantel McGregor is, although an oft-told story helps...
​
A female guitar prodigy (at the age of eight she became the youngest person in the UK to pass a Rock school exam) a thirteen year old Chantel McGregor was told by a major label that while they liked what they heard vocally, “girls don't play guitar like that."
Smartly deciding some girls do play guitar like that and continuing to do so for the next five years, she then enrolled at Leeds College of Music, becoming the first student in college history to achieve a 100% pass mark; she left with 18 distinctions, a First Class Honours degree in Popular Music and a prize for Outstanding Musicianship.

Glasgow, raise your glass to the musically powerful and ever charming Yorkshire Belle.