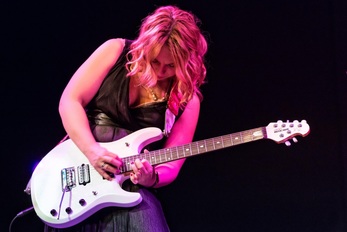 If you like live music Glasgow was the city to be in on the second last Friday of October.

No less than a dozen bands were playing within close proximity to one another including Squeeze, metalcore act Asking Alexandria, hardcore punk outfit Frank Carter & the Rattlesnakes, Big Country, the outstanding KISS tribute Dressed to Kill and Polish modern progressives Riverside.

And while one of the biggest names – and voices – in rock, Glenn Hughes, was playing The Garage, across the road at Nice N Sleazy up and coming blues rock talent Chantel McGregor was performing a set in promotion of her excellent new album, Lose Control.

Glenn Hughes is a hard rock act to follow but when you are playing within 150 feet of such a concert ticket draw and up against another emerging blues rock talent in the shape of Jared James Nichols (special guest on the Glenn Hughes tour) that’s not a case of musical stars aligning but musical stars colliding in a quirk of ill-fated timing, sheer bad luck and unforeseen, pre-booked circumstances.

The fact, therefore, that Chantel McGregor played to an audience a tenth of the size of the packed house Glenn Hughes performed to says more about the unfortunate booking clash than it does the undeniable and easily evidenced talents of Miss McGregor.

And having been lucky enough to catch the unfettered energy of Jared James Nichols plus a Stormbringer of an opening fifteen minutes from Glenn Hughes before crossing the road, this reviewer and fan of all three acts can tell you Chantel McGregor, Keith McPartling (drums) and Colin Sutton (bass) rocked, and played, as hard as the power trios fronted by Messrs Nichols and Hughes.

Strong first album outings included the swampy-blues structured 'I’m No Good For You,' a rearranged for power-trio performance of 'Screams Everlasting' (featuring a striking, dark blues solo from McGregor) and a beefier rendition of the hard-not-to-dance-to 'Fabulous,' a fairly straight ahead rock in fours number with a hypnotic guitar groove.

Chantel McGregor’s solo set in the middle of the ninety-plus minutes show was ad-libbed to take a couple of on-the-fly requests, indicating just how comfortable with, and appreciative of, the audience McGregor was on the night.
Sandwiched between a delicate, acoustic rendition of 'Anaesthetise' and the electric guitar and vocal dissonance of 'Eternal Dream' (hugely and intentionally influenced by the late Jeff Buckley) were acoustically requested covers of Metallica’s 'Nothing Else Matters' and Fleetwood Mac’s 'Rhiannon' (the latter another highlight of Like No Other).

While both the solo section and the Like No Other songs worked extremely well it was the heavier, riff-driven blues rock material from Loss of Control that truly shone, delivered by a tight, high-energy band – Keith McPartling was relentless on the kit, delivering monster beat after monster beat while Colin Sutton’s four-string punch and drive helped power songs such as the gritty hard rock of 'Burn Your Anger' and the bluesy, sassy rock of 'Southern Belle.'

And then there’s the earthy feel of Chantel McGregor’s playing, yet always with melodic undertones.
Both those traits were especially noticeable on 'Your Fever,' a grungy slice of blues with interesting melodic threads and the riff-driven title track, which taps in to the 70s rock sound whilst retaining a contemporary edge.

Main set closer 'Walk On Land,' a number influenced by modern progmeister and Porcupine Tree main man Steven Wilson, was arguably the song of the night.
The atmospheric, slow-build number featured a scintillating and lengthy free-flowing yet controlled solo from Chantel McGregor, bringing the show (other than a beat-the-curfew quick-fire encore of 'Take the Power') to a conclusion in fine, progressive blues style.

Even with a handful of British Blues Awards already attached to her résumé and a couple of great albums under her belt, Chantel McGregor will still have to work the circuit a few times (or get a great support slot) before she puts her foot on the second rung of the rock 'n' roll ladder of success.

But based on the quality of her live shows, such as the one a small but extremely satisfied Glasgow audience saw on a night where you couldn’t walk down a street without finding a gig, it shouldn’t be long before she’s climbing that ladder – and playing to the much larger audiences her talent, and music, deserve.

As long as there isn’t a legendary rock name playing across the road, obviously.