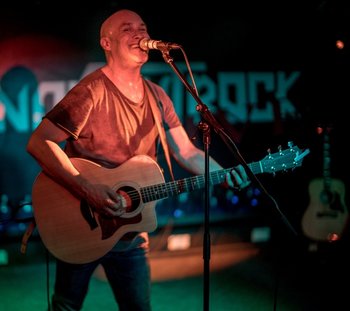 You know Dan Reed is having a great time when he only uses his favourite swear word (Trump) twice.

But then Dan Reed always has a great time when on stage, whether fully Networked with his Slam dunking and funking rock brothers or, as here, in the more intimate surroundings of an unplugged solo acoustic show in a small capacity club venue.

Solo shows have also become as much a part of Dan Reed’s musical fabric as the Dan Reed Network.
The latter showcases the dynamic and sweat-drenched front man in fully electric (in both senses) mode while the former allows the charismatic Reed, through solo touring or House Concerts, to thread DRN numbers and his life-observational solo material with anecdotes and humour, all while taking requests from the audience to create a ninety-minute set where only a handful of numbers (usually the first two and last two) are structured.

It should also be noted that Dan Reed becomes equally sweat-drenched at his one-man shows; not just because of the inevitably hot, smaller stages but because he puts his lyrical heart and vocal soul in to the performance of each and every song.

Dan Reed's acoustic shows therefore guarantee an artist who gives 100% and, at a club venue such as the Dreadnoughtrock (Scotland’s longest running rock club) where Reed was making a welcome return, it also guarantees a loud and receptive crowd willing to engage, sing-a-long and throw a few curveballs at an artist who is up for anything.

Where else for example will you get to sing-a-long to a couple of verses of Elvis Presley’s 'Can't Help Falling in Love' one minute (Dan Reed’s personal song-choice on the night) and then belt out the lyrics to 'Holy Diver' the next, Reed then talking about the late great Ronnie James Dio’s take on the positive meaning behind the devil-horns hand gesture and Gene Simmons recent, and since withdrawn, claptrap about trademarking it.
Like Dan Reed I'm happy to acknowledge Gene Simmons' hugely significant contribution to rock and roll but the only delusion of grandeur difference between him and Donald Trump is The Demon make-up; primarily because The Donald doesn’t need the mask (you can have that one for free, Dan). 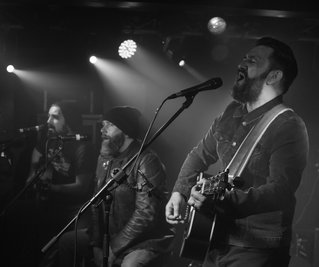 Also making a welcome return to Bathgate’s famous club venue were The King Lot, the West Lothian trio who caught some attention with their Hard AOR styled debut album in 2015, subsequent festival dates and well-received shows with the likes of Tyketto, Inglorious and The Dan Reed Network.

This time around it was a chance to exercise the acoustics, something the band – lead vocalist (and bassist) Jason Sweeney, drummer Chris Gillon and new recruit, guitarist Jay Moir – have done only occasionally, but something that works perfectly, primarily because the songs are based on melody and hooks first and amp volume second.

Given that state of musical affairs, songs such as 'Addicted' and 'One of These Days' sat particularly comfortably in the fifty-minute set, which is more than could be said for Jay Moir, who sat in some discomfort, having been hit by a taxi only two days before and remarkably (and extremely luckily), suffering only cuts, bruises and serious bangs to the hips.
Kudos to young Mr Moir (who is only one letter removed from the perfect surname) for both deciding to play, and playing so well.

Four new numbers were showcased on the night, including the infectious hook of 'Hearts on Fire' and the slightly lighter sounding 'Missing You.'
The King Lot were hoping to have album number two either out the door or imminent by now but, as one of the many great little bands out there who should be getting more attention, press and airplay than they do (don't start me…) their current destiny is driven by self-financing and the time-slippage over change of personnel (the amicable departure of previous guitarist Michael Fairbairn led to the recruitment of Jay Moir).
The band are, however, looking to a must-release-before-the-end-of the-year target to keep up momentum.

Other highlights of The King Lot's set included the slow-build 'Until My Dying Day' and a rare but perfect unplugged outing for 'Queen of Hearts,' the acoustic country-tinged number that closes out the debut album.

As good as The King Lot were, they were always going to be playing support to the enthralling and ever entertaining Dan Reed, whose requested renditions of DRN classics 'Tiger in a Dress,' 'Salt of Joy' and 'Rainbow Child' ("written after I had one of Jerry Garcia’s special cookies in the parking lot after a Grateful Dead concert") had the crowd in full lead, backing, incidental and harmony vocalled accompaniment.

Solo album songs such as new number 'Day One' (one of two songs performed on the night that will feature on forthcoming album Confessions), perennial favourite 'Closer,' the up-tempo 'Avalanche' (Reed rocking the bejesus out of his acoustic guitar) and the feel-good factor on overload of 'All I Need is You' were especially uplifting moments, in more than just a musical sense.

"God only knows I don’t have any answers, to tell you the truth I haven’t got a clue" sang Dan Reed (and pretty much the entire crowd) on 'All I Need is You.'
Yeah, but you’re asking the right questions Brother Dan; long may that continue.