You can leave your funk (and rock) on…
Dan Reed Network (with Mason Hill & Hollowstar), The Garage, Glasgow
13th November 2018 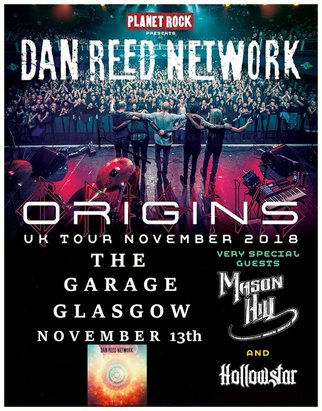 During their opening set at The Garage in tour support to the Dan Reed Network, Hollowstar singer and bassist Joe Bonson delivered impassioned and genuine words of thanks to the Dan Reed Network for putting new, non-established bands on their tour and to the audience for supporting, and coming out early, to see acts that form what is being described as the New Wave of British Classic Rock (NWOBCR).

The coming out early comment was all the more relevant at Glasgow as Hollowstar had to kick off their set sharp, the downside to a three band show on a venue curfew night.

But that they had a healthy crowd size getting behind their hard hitting rock tells you this quartet (Joe Bonson, drumming brother Jack Bonson, guitarists Phil Haines and Tom Collett) is a band with something to offer in the NWOBCR movement, epitomised by songs such as 'All I Gotta Say,' with suitably heavyweight groove, and the contemporary crunch of latest single 'Let You Down.'

However there’s many a hard rock band out there being noticed via differently weighted numbers and Hollowstar are no exception – heavy ballad 'Feel the Burn' (the stand-out track on the band’s tasty 6 track EP Some Things Matter) presents another, more serious side to a band.
It also helps prove that, along with their already fairly solid repertoire and the half-hour set as delivered at The Garage, they have every chance of being a NWOBCR contender.

Mason Hill are already a serious contender for the NWOBCR crown and a band who need little introduction in many parts of the UK and absolutely none in their home town of Glasgow.
How high is the fan-esteem for Scott Taylor (vocals), James Bird (lead guitar), Marc Montgomery (guitars), Matthew Ward (bass) and Craig McFetridge (drums) in these here parts?
The Scottish rock-metal quintet have already played, and packed ‘em in, at The Garage, on their own headline ticket.

Flitting between established Mason Hill numbers such as the riff driven 'Survive' and the meaty swagger of 'Now You See Me' (both from the band’s self-titled 2016 EP) and newer numbers including the gritty versed and hook chorused 'Hold On,' driven by the relentless, monster beat from Craig McFetridge (I’m not sure the  ever-smiling Mr McFetridge knows just how good he is) Mason Hill could do no wrong in the crowd’s eyes and ears – and on the night, performance wise, they didn’t.

Add in a genuinely heartfelt rendition of the band’s song of home, 'Where I Belong' (a showcase for Scott Taylor, James Bird and the full-voiced "carry me home" Weegie choir) and a blistering version of Audioslave’s 'Cochise' (Scott Taylor on full vocal throttle), and you have a set that underlines why their debut album (slated for a 2019 release) is so highly anticipated.

The reception received by Mason Hill and their forty-five minute home town set produced a classic rock case of follow that then; but the Dan Reed Network have been there, done that and bought the support bands'
T-shirts (trust me, they are the sort of guys who would do just that) enough times to shake off any such pressures and step up to deliver their own inimitable brand of fully funked-up melodic and power rock.

And that they did, with a tight, well-rehearsed set that played as the perfect performance counterpoint to the intentionally looser Glasgow show in 2017 where, outside of half-a-dozen set-list staples, they pretty much let the audiences choose the songs (which led to a lot of fun and two or three different versions of some of the crowd shouted numbers).
Last year – the ultimate DRN party, celebrating the band’s reunion and then current album Fight Another Day.
This year – the ultimate DRN performance, and one that was as uplifting, spirited, cohesive and fun as any gig they delivered back in the late 80s and early 90s.

From opener 'Rock You All Night Long' (especially fitting in light of the bands that had come before and the  vibe and energy of the evening) and through a host of DRN classics (a particularly feisty 'Forgot to Make Her Mine' sharing stage space with the likes of 'Under My Skin,' 'Tiger in a Dress' and 'Get To You') Dan Reed and guitarist Brion James, bassist Melvin Brannon II, the super-rhythmic Dan Pred and keyboardist Rob Daiker (who synth-rocked many of the songs and added second guitar to others) rocked it up and funked it out.

They also reminded those in attendance of just what the 21st century DRN are all about with the fist-in-the-air punching anthem 'Divided' from Fight Another Day and a taster of latest release Origins via the melodic vibrancy of the lead-off single, 'Fade to Light.'

Dan Reed was in fine voice, highly animated and having a good time throughout; that he was enjoying himself so much was borne out by the fact he only used his favourite swear word, Trump, twice, during the entire show.

Not to be outdone, Dan Reed's fellow front of stage Networkers, Melvin Brannon II and Brion James, had their own funk showcase and song featured outings, respectively.
Brannon funked the five-string bejesus out of his bass during the 'Baby Now I' medley (I Was Made For Loving You - Let's Groove (featuring Brannon on the vocal highs) - Enter Sandman (Metallic funk, baby) - Relax) while James was front and centre for the reggae-pop of 'Save the World,' the Fight Another Day song that becomes more relevant (yet further away from where we actually are) with every passing year.

There was also room for a surprise by way of 'Doin' the Love Thing,' (not heard at a DRN concert since the Slam tour some thirty years ago), an arms-swaying-in-the-air outing for 'Stronger Than Steel' and full-voiced crowd sing-a-long for the trippy and melodically infectious 'Rainbow Child.'

'Ritual,' backed by crowd chanting support (and a chorus cameo from Scott Taylor), would have made for a funk rockin' finish but the band had a final trick up their sleeve...

With time against them (the aforementioned midweek / club night curfew – turns out they can’t Rock You All Night Long) the band quickly introduced a four-piece brass section to the stage for a two-song soul revue, closing with a crowd in full voice, horn blastin’ rendition of 'You Can Leave Your Hat On.'
While all four brass blowers played their instrumental part, special mention for trombonist John Milne whose solo included everything but the Flight of the Lurpak Butterbee (one for those who remember the classic Aardman animated TV advert).

It was a souled-out finish to a sold-out show on a night where, courtesy of an attention grabbing set from Hollowstar, humongous home town performance from Mason Hill and a top-of-their game, everything but the kitchen sink display from the Dan Reed Network, the crowd could both rock it up and leave their funk on.