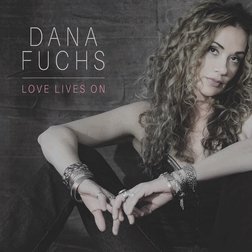 The 'Backstreet Baby' featured in the song of that name may be "wanted in four counties" as Dana Fuchs sings with her trademark bourbon fire and crackling ice vocal, but this particular baby is clearly safe at home in the County of Shelby and more specifically the city of Memphis that raised her in the recording studio.

A number with plenty of sass appeal, big backing vocals, horns that swing as hard as the song's groove and a fabulous splash of Hammond keys, 'Backstreet Baby' is a big, bold and brassy four minutes that establishes just where Miss Fuchs is coming from, musically, on her fourth studio solo album.

Continuing the swing vibe is a similarly framed but far funkier and blues-grooved rendition of Otis Redding’s 'Ain’t Nobody’s Fault But Mine,' a song that allows Dana Fuchs’ throaty and Joplin-esque vocal to really come to the fore.

It’s a striking one-two opening but one that could be perceived as a bit of an up-tempo and full-on soul-swing surprise given that, pre-release, Dana Fuchs explained the album was recorded shortly after a time of personal grief (the loss of three close family members in a short space of time).
But that grief turned to celebration and joy with the birth of Dana Fuchs’ first child; collectively those events have inspired Dana Fuchs to deliver not just a great album but an outstanding one.

The smoother brace of 'Callin’ Angels' and 'Sittin’ On,' which follow, are still big on the Memphis soul and horns sound but with a Gospel tinged subtlety and reflective personality, respectively.

The familial losses that helped shape the album surface on the title track, a poignant yet uplifting soul-blues ballad that exemplifies the hope and perseverance Dana Fuchs has stated the album is a testament to.

As the album continues it becomes clear Love Lives On is not just a catharsis of sorts for Dana Fuchs but a true homage to the sound and power of Memphis and Southern soul.
Recorded at the Music & Arts studio (in just eleven days) under the guidance of noted Memphis producer Kevin Houston, Fuchs and long-time song writing partner and guitarist Jon Diamond (with additional collaboration from the likes of Scott Sharrard) have clearly been inspired by both that music and the history of the surroundings.

Nor does it hurt to have a studio band that can boast original Hi Records organist Charles Hodges, Stax stalwart Steve Potts on drums, keyboardist Glenn Patscha and bassist Jack Daley.

The second half of the album, which is slightly more down-tempo, is equally impressive.

The Gospel soul of 'Faithful Sinner' and the sultry sway of 'Sedative' (a song the late Amy Winehouse would have been all over) make for a fine back-to-back brace but the bluesy, slow soul-rock declaration that is 'Ready to Rise' trumps both.

The delightful acoustic number 'Fight My Way' would have been a great fit for previous album Broken Down Acoustic Sessions but here delivers beautiful contrast to the fuller soul sounds of the album.

The harmonica wails of 'Battle Lines' add to the countrified shades of the ballad before 'Same Sunlight' delivers a soul swingin’ shuffle of the highest, we're all in this life together, order.

A cover of 'Ring of Fire' might seem a strange choice to close out a Southern Soul album but re-imagined as a slower, pedal steel affected ballad the Johnny Cash classic becomes the perfect country and soul (baring) conclusion.

Love to Beg (2011) and Bliss Avenue (2013) were strong, sassy blues rock outings from Dana Fuchs but the New Jersey native’s relocation to Memphis, coupled with the events that transpired in her life prior to recording Love Lives On, have conspired to deliver an album that truly defines Dana Fuchs.

It’s also a release that deserves to take her beyond the Billboard Blues Charts and on to the wider and larger audience her talents so obviously, and thoroughly, merit.