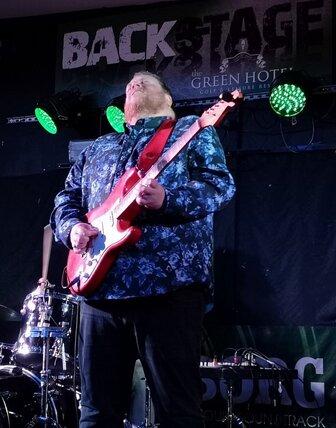 The fact that Danny Bryant, on his first ever foray to Backstage at the Green in the lovely town of Kinross, on a drizzly, mid-week school night, still pulled a healthy and highly appreciative crowd tells you that
1) Mr Bryant’s blues reputation precedes him and
2) he will, without question, be back to what is one of Scotland’s most welcoming, and cosiest, club room venues.

Danny Bryant was also in fine, fine form, both in terms of musicianship with his band of blues-minded brothers (Stevie Watts - keys, Paul Mallatratt – bass, Dave Raeburn - drums) and in relaxed, having fun mood.

He’s also highly engaging (he should sell tickets just to have half an hour in his company, never mind the seriously impressive, ninety minute live performances) and quick with the quips – one of many being when the big man of the British blues scene delivered the self effacing "we have plenty of merchandise with us including CDs and copies of my Keep-Fit video... on Betamax."

Such old-school video format jokes dovetailed perfectly with Danny Bryant’s brand of old-school blues for the 21st century, evident from the off and the band’s big 'n' dirty, thick sounding 12-bar rendition of 'Bright Lights, Big City,' a song that immediately set the musical modus operandi of the band.

Dave Raeburn and Paul Mallatratt provide a clean and simple rhythmic proficiency that serves Danny Bryant well – their band leader’s penchant for going off on one, extending his solos or dialling a song down until waving the band back in or signalling the song’s end means that simple but firm hand on the rhythmic rudder is a pre-requisite.
Completing, and filling, the sound is the dextrous and blues-classy organ and electric piano work of Stevie Watts, one of the keyboardsmen of the British blues and blues rock scene and the perfect foil to Danny Bryant’s 'electric' guitar playing.

Second number 'Guntown,' from 2014’s Temperature Rising, is one of Danny Bryant’s most impressive songs.
The soulful blues allows the big voiced Bryant (with a style and timbre of a more controlled Joe Cocker) to dial that voice down to suit the tone and mood of the highly emotive number, coupled with highly expressive guitar play.

That six-string expressiveness isn’t so much a trait of Danny Bryant as the element that truly defines him as a musician – his solos are so expressive as to be an extension of Bryant’s voice and vocabulary in musical form, whether through a repeating refrain, a clutch of crying notes or ever-rising bars of soloing that always seem to crescendo at exactly the right place and time.

Given the catharsis and emotional release that current album Means of Escape was, and is, for Danny Bryant (the title says it all; music and performing are Bryant’s escape from what ails ya and the darker issues that created soul-baring predecessor, Revelation) it was no surprise that by third song in, the heavy melodic blues of 'No Means of Escape,' the set-list (with a few exceptions and a couple of covers) showcased the new album almost in its entirety.

That said "set-list" is a little misleading as Danny Bryant, after the first two scripted numbers, likes to change it around as the mood, feel and reading of the audience takes him (another reason for having a rhythm section who are always there wherever and whenever Bryant heads for I’ll lead, you follow territory).

In this case that included an impromptu and poignantly weighted cover of 'Little Wing' and a seriously muscly take of 'Heartbreaker' (a set staple since his RedeyeBand days).
Both songs sat comfortably within the No Means of Escape material, highlights from which included the ballad 'Where The River Ends' (reworked from its 2003 studio origins), the blues cryin' 'Tired of Trying' and the throwback, damn-near-in-Chicago heavyweight blues pairing 'Nine Lives' and 'Warning Signs (in Her Eyes),' the latter complete with grooving organ solo from Stevie Watts. 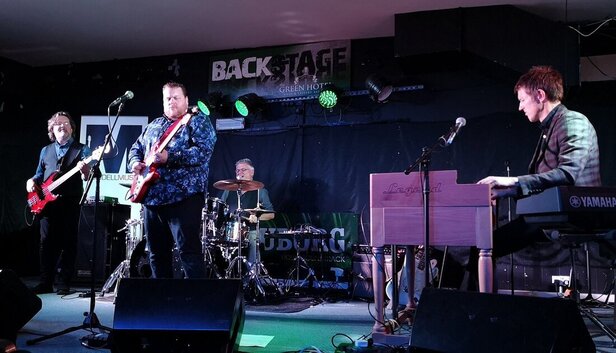 Danny Bryant and band's first visit to Backstage at the Green in Kinross will certainly not be their last.
Main set closer, blues ballad 'Painkiller,' remains one of Danny Bryant’s most powerful and emotive songs.
Those facts were reinforced on the night through Bryant’s vulnerable vocal opening, accompanied only by Stevie Watt’s tastefully structured piano lines; the song then built to a full band power blues, extended to nearly twice its studio length.

Hard as that was to follow, Danny Bryant and band did just that by encoring with a far lighter, fun filled 'Green Onions,' highlighting just what a fine player Stevie Watts is (not so much Booker T and the MG’s as Stevie Watts and the DBs).

As mentioned previously, Danny Bryant is an engaging individual whose company it’s a pleasure to be in.
He’s also incredibly humble and still in awe of the time he met his hero Buddy Guy; he’s even more struck by the fact that when a young Danny Bryant said to Buddy Guy it was an absolute honour to meet him, the blues legend replied with “Lovely to meet you too, Danny.”