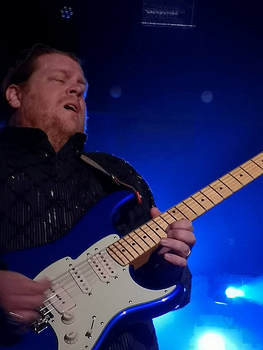 Mid-week venue curfew (a common complaint these days), a gig in the face of storm weather and American hard rockers Buckcherry playing in the centre of town almost guarantees a fair few punters who would otherwise be in attendance to see Danny Bryant being elsewhere.
​
But, considering all of the above, it was a decent turn-out to see the noted British blues rock musician and his band as they neared the end of a very long run of UK & European dates in support of latest album, Revelation.

It was also a chance for the crowd to catch Edinburgh based Main Street Blues, who played in front of a still arriving but very appreciative audience (not so fortunate was the opening local act, Indie styled singer-guitarist Kev Howell and his band; they had to start so early (that curfew again) they played to not much more than the early birds and their own small entourage of supporters).

Main Street Blues shortened performance (did I mention the curfew?) was a truncated version of their core set which is built around primarily up-tempo numbers, some R&B and a splash of superb, slow blues, here in the shape of the oft covered 'Tin Pan Alley.'
The latter showcased just what a smooth player Main Street front man Derek Smith is and the sweet tone he delivers form his guitar.

Other numbers, including the band’s mid-tempo and blues rockin' 'Dusty Road' and a cool take on Coco Montoya’s 'Last Dirty Deal' (both from latest album Bluest Blue) helped show why Main Street Blues are one of the best blues based acts to emerge from the East of Scotland in recent years.

Effortless.
That would be the one word to describe Danny Bryant when he slides in to a solo; he makes it seem so easy that for a minute you think maybe anyone could do this – but in reality very few do it quite like he does.

Danny Bryant, as down to earth a musician and as honest and lovely a fella as you’ll meet, would be the first to admit he’s not the most acclaimed, flashiest or fastest guitarist out there but what Bryant has is feel, in spades.
Sitting his Candy Apple Blue signature Fret-King Corona up to his midriff and running in to a solo before you even realise he has (so smooth is his style) he builds on that feel until it becomes about the howl and cry of the top notes or, alternatively, firing off a rapidly repeating chord on the meatier numbers (both styles made themselves heard on an extended version of 'Isolate,' one of the more the soul searching and soul bearing numbers on the highly personal but immediately accessible Revelation). 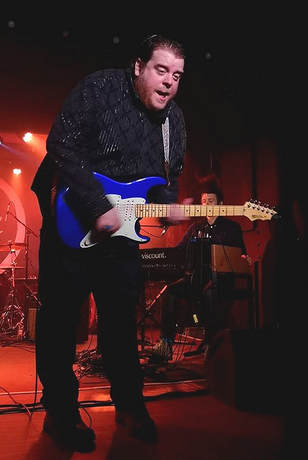 Nor would Danny Bryant ever try and set himself up as the world's greatest singer but he delivers in such impassioned tones on the slower or quieter numbers that the songs have exactly what they need vocally and, frankly, wouldn’t be without those vulnerable deliveries.
Prime example was 'Someday the Rains Will Fall,' which carries a different but no less impassioned dynamic in its full electric clothing (contrasting with its acoustically structured arrangement on Revelation).

While Revelation numbers obviously featured in song selection Danny Bryant likes to mix it up and keep his band on their toes.
Set lists were pretty much abandoned half way through the long tour with Bryant picking and choosing what songs to put where (the less often played 'Blood Money' from the album of that name was slipped in half way through the set as a fan/ audience member request).

On more than one occasion Danny Bryant kicked in to a riff or intro for rhythm section Alex Phillips (bass) and Dave Raeburn (drums) and keyboardist Stevie Watts to follow – nor is the guitarist  averse to running straight in to the next number while Messrs Philips, Raeburn and Watts are just coming down on the final note of the previous song (Bryant’s glint in the eye and wry smiles on the faces of his three band mates tells you while such moments are now expected, they still come unexpectedly; keeping it real and keeping it fresh).

On the subject of the players Alex Phillips and Dave Raeburn are a tidy team who lock down the beat on a rocking, lead-heavy riff number such as 'Sister Decline,' while Stevie Watts deserves special mention for his role in the Danny Bryant four-piece sound.

With Watts, Bryant has the perfect sparring and musical partner, whether through the piano or organ punctuation that adds to many of the songs, running great big swathes of organ grooves across the chosen shuffles (tonight it was Revelation number 'Truth or Dare') or his reactionary answers to Bryant’s six-string calls, as heard on the mid-section of 'On the Road Again' (a song that mixes ZZ Top’s "a haw, haw, haw" vibe with Stevie Ray Vaughan groove).

Elsewhere in the set was a delightfully full flowing 'Little Wing,' the blues drenched and swaying 'Heartbreaker' (which goes back to Danny Bryant’s Red Eye Band days) and an encore of 'Painkiller' from 2013’s Hurricane.
One of Bryant’s finest songs, 'Painkiller' has both pathos (through its piano and vocal opening) and power
(a big sounding, full band finish) in abundance.

Glasgow was close to the last date of the spring tour but it’s hoped Danny Bryant will be back out on the road in the autumn; those that missed him this time around make sure you catch him at the next opportunity.