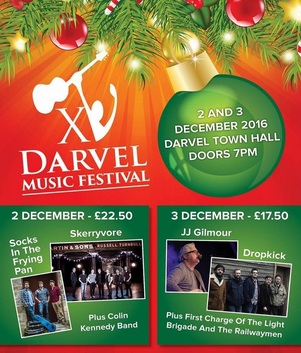 While the acoustic country and pop harmonies of the former and funked out soul of the latter made for a solid start to DMF XV, Weekend 2 weekend eclipsed it.

The Colin Kennedy Band opened proceedings with a cracking set of melodic blues and country based rock based around their Paint the Grey Sky Blue album.

The band’s lighter side was also showcased (as on the album’s title track) but at the heart of the CKB is an excellent little rock quartet, exemplified by the guitar crunch of 'Jealousy,' which morphed in to a tribute to the late David Bowie via a rockin' cover of 'Gene Genie.'

By contrast the award winning Irish trad-folk trio Socks in the Frying pan, (the County Clare trio’s name bettered only by the title of their second album, Return of the Giant Sock Monsters from Outer Space) kept the blues away by delivering a collection of good going sets, foot tapping jigs and lighter airs in their inimitable acoustic guitar (Aodán Coyne), button accordion (Shane Hayes) and fiddle (Fiachra Hayes) style.

While the reels got a number of Darvel crowd moving it was the more plaintive vocal moments that made the biggest impact, including the trio’s rendition of 'Dublin Blues' (in tribute to the late American country/ folk singer Guy Clark, one of the many music notables lost in 2016) and the crowd sing-a-long of 'Rolling in My Sweet Baby’s Arms.'

What separates the Skerryvore septet from the Celtic rock pack is their nu-trad musicality, which covers and links both AOR styled melodic rock and the Scottish traditional (anyone unfamiliar with Skerryvore, on hearing their instrumental opening, would be forgiven for thinking "bloody hell, it’s the rock band Toto with pipes and fiddle").

One hour and an encore later Skerryvore had delivered one of the best sets Darvel had ever witnessed (and when you consider the festival has hosted the likes of Grammy award winning guitarist Larry Carlton (twice) and Paul Carrack that’s no mean musical feat).

The band presented everything from fan favourites 'Angry Fiddler' (featuring Craig Espie in full fiddle flow) and the 'Ginger Grouse Jigs' to the Celtic pop of 'Walk With Me,' the moving 'Home to Donegal' (featuring an emotive vocal from Alec Dalglish), an excellent new Celtic melodic rock number 'Live Forever,' a cover of Runrig’s 'Rocket to the Moon' and a perfect set closer in the audience participation shape of 'Put Your Hands Up.' 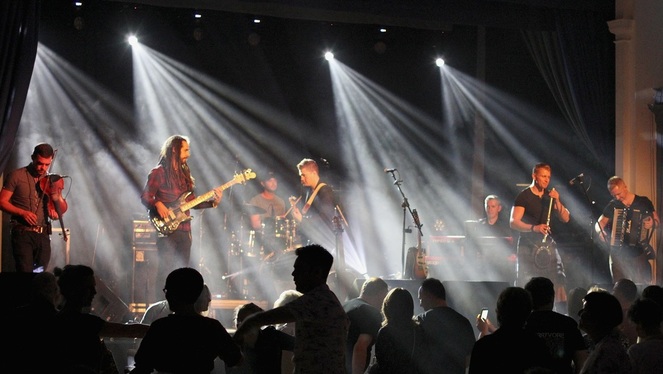 From Celtic AOR rock to dancing down the front jigs, Skerryvore delivered one of the best ever Darvel sets 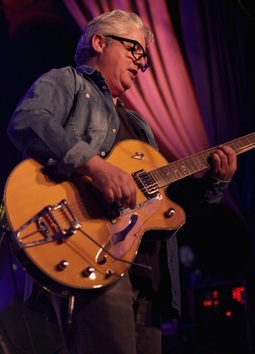 Friday was a hard three acts to follow, but follow it the Darvel Music Festival XV did, with a four band finale that started with local band The Railwaymen (featuring Darvel man David Paterson, who acted as MC on the Friday) and ended with another champion of the festival, JJ Gilmour.

Anyone walking in on The Railwaymen’s set could be forgiven for thinking they had travelled through a musical portal to a Nashville music bar promoting the best the famous music town has to offer, such was the countrified rock style of the quartet’s set, from 'Still Here' to the more pop orientated 'Bridges.'

First Charge of the Light Brigade were in First Charge of the Small Brigade mode for this particular outing, First Charger singer/ guitarist Yorick Cormack delivering an acoustic Light Brigade showcase in the company of six-string partner Kenny McGregor.
The set included stripped back arrangements of 'Postcards,' 'My One Track Mind' and 'Civil War' from the full band’s self-titled album of 2014; unfortunately it was also a set marred by the now all-too-familiar back of the hall bar chat, courtesy of those who would rather carry out a conversation than appreciate what everyone else had paid to see and hear.

Dropkick lifted the volume back up with a well-crafted set of soft voiced, melodic pop numbers that jangled like The Byrds in a contemporary musical setting – 'I Wish I Knew' and atmospheric set closer 'Save Myself' (both from current album Balance the Light) were two of many highlights.

For all the focus of the quartet in delivering a lovely set of melodic alt-pop, it was also interesting and a little comical to watch singer guitarist Andrew Taylor focussed on his phone at his feet, in case a text to tell him he had become a father again flashed on-screen (the answer to your question is no, he didn’t).

JJ Gilmour, ex Silencer and one of Scotland’s finest melodic pop/ rock singer songwriters (but one of the most underappreciated in the great scheme of things), suffered the same First Chargers ignominy of bar backwash in his quieter moments; but a few well-chosen words ("c’mon guys, you're no’ in a Bingo Hall tonight") and a respectful hush descended – you really could have heard that pin drop during the genuinely poignant and beautifully performed 'Glasgow Town' (from the just released album Dix) and 'Dancing Shoes,' both featuring JJ Gilmour and Phil Kane (a 20 year keyboard companion to Gilmour, Kane is also a ten-timer at Darvel).

Outside of that dialled down one-two JJ Gilmour and full band (which included guitarist Brian McFie and monster drummer and current Texas sticksman Ross McFarlane) delivered the best of what JJ Gilmour has thus far offered as a solo artist, outside of set opener 'I Can Feel It' ("right, that’s the Silencers stuff out of the way!").

From debut solo album Sunnyside P.A.L. highlights 'Jenny Fly' and 'American Dream' and on to a full-on guitar rock rendition of 'Wild Child' (which is as weighty lyrically as it is musically), JJ Gilmour closed out the Darvel Music Festival XV in fine fashion, bolstered by a special guest appearance from Northern Irish singer and Adventures front man Terry Sharpe.
Sharpe took the microphone for a four song trip back to Adventures of the past, ‘Broken Man,’ ‘Sea of Love,’ the rockin’ ‘Washington Deceased’ and ‘Feel the Raindrops.’

If this is indeed to be the final curtain call on the Darvel Music Festival (the victim of ever-reducing funding (a sign of the budgetary restraint times) but kept alive through the exceptional dedication of Neil and Sheila McKenna and a tireless team of passionate volunteers) it’s hard to conceive of it going out on a bigger and better high.

That said plans are already afoot to ensure live music is heard in Darvel in 2017 – click here to head to the website for more information and how you can help support music in Darvel.

All of which means, much like Terry Sharpe’s appearance, musical Adventures in the East Ayrshire town will hopefully continue.