No More Heroes
David Bowie – The Next Day 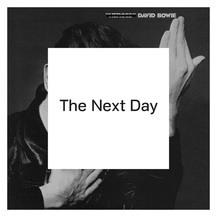 Whether you love, loathe or find yourself ambivalent to the sometimes brilliant sometimes not qualities of David Bowie’s music, you cannot ignore it.

And you certainly couldn’t ignore The Next Day even if you tried.

Bowie’s twenty-fourth studio album was announced on his sixty-sixth birthday, the same date that saw the release of the lead-off single ‘Where Are We Now?’

It was also the singer songwriter’s first new studio work in ten years.

All of which meant that, with the fascination and attention David Bowie and his music command, top of the chart sales plus critical and Bowie-fan acclaim were immediately guaranteed.

The Next Day, produced by Tony Visconti (no stranger to the production desk of a David Bowie album), is a welcome return to the recording studio for the chameleon of pop and rock.
But the initial high-praised reviews that accompanied the album’s release had a fair amount of King’s New Clothes and waited-ten-years-for-this impact about them.

“Greatest ever comeback album,” “good as anything he has ever done” and “his best album in decades” are paraphrased examples of many of the instant reaction comments, but while this is Bowie’s best album in at least twenty years (and more musically adventurous than either Heathen or Reality that preceded it a decade before) it’s an album that will split many a rock music fan.

The distinct and creative musical and lyrical styles of David Bowie are to the fore on The Next Day, a major reason why so many critics are citing it as an instant classic.

But those traits will also have others deciding it’s musically discordant or lyrically dysfunctional – themes The Heebeegeebees (the early 80’s spoof band that sent up many an artist) incorporated in their 'Fashion'esque Bowie parody ‘Quite Ahead of My Time.’
(The song contained the classic line: “unintelligible lyrics, cutting up words and into sticking them lines”).

Those disjointed lyrical approaches make appearances on The Next Day – it wouldn’t be a David Bowie album if they didn’t – but they are certainly not as pronounced, or perhaps not as obvious, as in decades or albums past.
And that’s primarily because Bowie takes a more mainstream rock or pop vocal approach on The Next Day, as opposed to the call and answer or high then low vocal styles employed so famously on the more off-beat material of the Scary Monsters era.

The Next Day is an interesting concept without ever being a concept – the album cover seems to be a nod to the past and one of David Bowie’s most successful and critically acclaimed periods (Heroes and the Berlin years), while lyrically a number of the songs reflect on the past or mortality.

But this is not a sequel to Heroes and, as the album’s name and title card obscuring the cover photo suggest, this isn’t an artist looking to the past for his musical future.
And David Bowie doesn’t tend to do the same album twice.

The title track announces the return of David Bowie in punchy, new wave fashion.
Reminiscent in its bare bones power of Tin Machine (Bowie’s band project of the late 80’s), 'The Next Day' is a strong opener; it's followed by the darker and slightly sinister ‘Dirty Boys.’

‘The Stars (Are Out Tonight)’ is, along with the mid-tempo 'Valentine’s Day,' the most accessible song on the album and was chosen as the second single from the album.
The single was accompanied by a short film featuring Bowie and Tilda Swinton, the song and video intermixing and reflecting the everyday and the celebrity.

The ballad ‘Where Are We Now?’ carries a spacey atmosphere and sits surprisingly comfortably on an angular rock album that includes the frantic and edgy ‘If You Can See Me’ and the big-beat and guitars of ‘(You Will) Set the World on Fire.’

Not everything works on The Next Day (the frantic, off-beat rhythmic nature of 'If You Can See Me' is a little too frantic) and there are songs that would have worked better in a previous day, not the next one.
For example 'How Does the Grass Grow?' recalls the quirkiness of Bowie's 1980 hit 'Ashes to Ashes,' but it sits a little uncomfortably on a new Millennium wave album such as The Next Day.

But then whether it’s the melancholic ‘You Feel So Lonely You Could Die’ or the discordant, melodic pop over militaristic drum beat of the anti-war number ‘I’d Rather Be High,’ the Bowie stamp runs through The Next Day like a stick of Blackpool rock.

The album closes with the track that best exemplifies why The Next Day will receive both high-praise comments and shrug of the shoulders disinterest.

‘Heat’ is slow and brooding, as is Bowie’s vocal. The song is sprinkled with sonic background effects such as wailing guitars and string interjections and carries a vibe like no other song on the album.

But at the end of the (next) day David Bowie’s comeback album is, more than anything, an album only David Bowie could make.