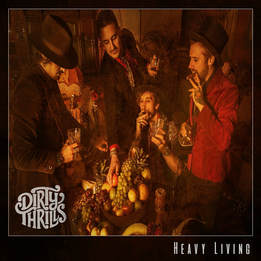 London based quartet Dirty Thrills have made a bit of a name for themselves through their self-titled, bluesy heavy rock debut of 2014, notable appearances at London venues the 100 Club and Shepherd’s Bush Empire, airtime on BBC Radio 2 and festival sets this summer at Camden Rocks, Wildfire and Ramblin’ Man Fair.

However if there’s any justice in the rock world (and therein lies the rub) they’ll make one seriously heavy, swaggering and soulful impact with Heavy Living, an album that is undeniably and massively 70s in sonic vibe but carries a contemporary Queens of the Stone Age styled edge and a little Rival Sons for good musical measure.

As a combination goes, that’s not too shabby – and neither are the songs.

Opener 'I’ll Be With You' sets the heavy living, heavy sounding tone with high-intensity verses and a calmer "I’ll be with you" chorus before the band lift the tempo once again, tempered by a short chain-gang and claps styled interjection.

'Go Slow' mixes the contemporary with a 70s swaying groove, a slice of Humble Pie and a touch of harmonica before 'Law Man' bluesifies the band’s sound to deliver a pacey tale of social commentary on those that can take away from the already struggling with no sign of remorse (in Official Music Video form, 'Law Man' delivers itself cleverly as a Spaghetti Western living in the 21st century).

'Hanging Around,' which follows, returns to that decidedly 70s show of thick riffage, heavy groove and Zeppelin sway.

Strong as those tracks are and the musicianship is – a rock 'n' roll solid rhythm of Steve Corrigan (drums) and Aaron Plows (bass), howlingly good guitar work and dirty thrill-filled, rugged riffing from Jack Fawdry – it’s the voice of Louis James that grabs and demands attention (the band’s vocally versatile front man is the son of late British singer and musician Nicky James, who also fronted the proto-Moody Blues band The Moody Blues 5).

Although they have as many similarities as dissimilarities, vocally speaking, the immediate thought on hearing Louis James let go and soulfully soar is "bloody hell, it's Steve Marriott" (in terms of shivers down the spine and how he wails on a line on the edge of control).
Vocal cases in point are the aforementioned 'Go Slow' (hence the echoes of Humble Pie) and the spacier, semi-psychedelic 'Rabbit Hole.'

By the time the half-way point is reached with blues-soul ballad 'Lonely Soul' (another stellar performance from Louis James with tasty, accompanying six-string lines from Jack Fawdry) and the slow 'n' heavy 'No Resolve' (sporting shades of Free), another thought forms; that this may well be as jaw dropping a debut as Inglorious delivered in 2016.

As the album continues through the vocal wail above dusty middle-eastern streets of 'Interlude,' the intensely delivered 'The Brave' ("lonely are the brave!" cries Louis James with soulful and vocal passion), the slower, blues'd up and boozed up 'Drunk Words' and rollickin' album closer 'Get Loose' that thought is confirmed as fact.

Now we just need to cross our fingers Dirty Thrills and Heavy Living get as much exposure as the promotional hype and hoo-ha that surrounded the Inglorious debut, or achieve as much attention as Black Country Communion’s highly anticipated fourth album is going to get on name alone, before you even get to the content (which, as one would expect, is an accomplished, Zeppelin-influenced offering).

But, question of how far Heavy Living may fly aside, congratulations Dirty Thrills, you've seen off the contenders for rock album of the year and put The Voice Of Rock into, at best, second place for best rock vocal – that’s how good this album and the performance of Louis James is.

If there’s any failing to the second offering from Dirty Thrills it’s the question of name – not the band (their gritty, sonic swagger means they are perfectly titled) – but the album.

Given its sonorous, rock weight it should have been called Heavy Lifting.

Go pick up a copy of the heavy rock album of the year now – but be warned, you might need a fork lift.