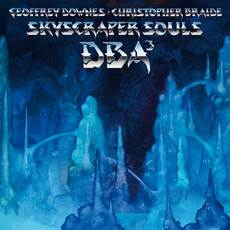 While on the face of it there may seem to be some musical distance between the progressive soundscapes and melodies created by Asia and YES keyboardist Geoff Downes and the skill set carried by songwriter, producer and musician Chris Braide (who has produced or written for such pop icons as Sia, Lana Del Rey, Britney Spears, Christina Aguilera, Marc Almond and Beyoncé to name but six), there are far more similarities (and a clear melodic simpatico) than differences.

Geoff Downes has an ear and penchant for quality melodic pop and first made his name as one half of pop duo The Buggles with Trevor Horn.
Their radio star killing videos masked some truly sophisticated and adventurous pop, case in point being their long-form piece Fly From Here, later recorded by YES (with very little makeover).

Chris Braide has a similar ear for the bigger melodic picture and, interestingly, has a vocal tonality not too dissimilar to Trevor Horn.

The first Downes Braide collaboration produced the melodic electro-pop debut album Pictures Of You (2012); follow up Suburban Ghosts (2015) was a more progressive and atmospheric affair.

Both albums had their musical and melodic moments but there is no question they have bettered what has gone before with Skyscraper Souls, and by some long way - a truly pop-gressive and semi-conceptual work (), the duo’s third album is filled with melodic resonance and uplifting tonal beauty.

It also benefits from a number of not insignificant guest musician/ vocal contributions on each track and the services of drummer Ash Soan and bassist Andy Hodge (the rhythm section of Soan and Hodge give the songs a life and warmth that was posted missing from previous DBA offerings, where drum machines and samples were used).

'Prelude,' the album’s short introductory number (featuring a delightful spray of six-string notes from Andy Partridge, one of four appearances from the XTC luminary) sets up a lyrical theme of the album, as repeated with added poignancy at the end of the eighteen minute title track which follows ("If we can’t turn back the clock, we just keep turning on this rock, searching for a place called home, with our skyscraper souls").

'Skyscraper Souls' is a beautifully crafted piece of primarily up-tempo and most definitely uplifting progressive pop with melodic rise, harmonic fall and additional vocals from the B-52s Kate Pierson.
The long-form title track also number reinforces another of the album’s themes, that "we’re mountain climbers, you and I," collectively "raging against the dying light" and our finite time on "this rock."

The short and sweet piano led 'Glacier Girl' is followed by the radio friendly and up-beat 'Angel On Your Shoulder,' featuring vocal contributions from Matthew Koma and a great guitar solo from Patrick Howley.

The more soulful and reflective 'Skin Deep' (featuring Marc Almond, smooth jazz background trumpet from Matt Bourne Jones and a lyrical nod to 'Glacier Girl') sets up the plaintive and atmospheric 'Dark Times,' itself leading to the album’s short closing piece, 'Finale,' and a repeat of 'Skyscraper Souls' closing lyrical remarks. (The guitar of Andy Partridge makes itself known in touching style on 'Finale,' much as it did on 'Prelude').

Between them Geoff Downes and Chris Braide, in their respective musical day jobs, have enough pull to guarantee an audience for Skyscraper Souls.
The worry however is with the word "pop" banded about so vigorously and unashamedly in their work as DBA, the more blinkered and old-school progressives who come out in a rash at the very mention of that three-letter word will balk at the music that pops (sorry) out beyond the Roger Dean cover art.

Skyscraper Souls, in terms of melodic flow and sophisticated pop progressions (in that regard not dissimilar to another excellent and similarly structured 2017 release, Cardington by modern progressives Lifesigns), melodically soars as high as its title suggests.