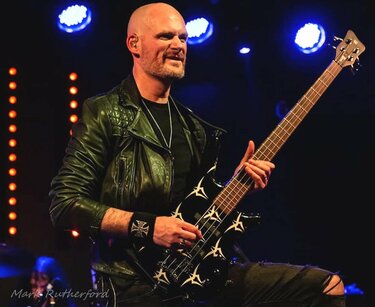 Delivering the Final Testament. Eden's Curse co-founder, primary songwriter and bassist Paul Logue
Eden's Curse finishing their 2019 UK Spring tour in Glasgow made perfect sense and was quite intentional – the multi-national outfit have been adopted as one of "oor ane" due, in part, to Scottish drummer John Clelland but more significantly through Renfrewshire based musician Paul Logue, the band’s co-founder, bassist and primary songwriter.

The final show of the tour also turned out to be more poignant than anyone would have expected at the time – playing Testament (the name of the band's recent career spanning Best Of, played through in its entirety) became Final Testament when Eden’s Curse, through official announcement, brought a mutually agreed close to their thirteen year career four days after the Glasgow show.

They couldn’t have bowed out on a better (but could and should have been bigger) high, however.
A Sunday gig over the Easter Weekend scuppered any chance of a sell-out but it was still a well-attended show with an audience that, in true Weegie fashion, delivered a noise that I’m willing to bet was as loud, and probably louder, than any of the preceding concerts.

Prior to the Testament of melodic rock metal gospel according to Eden’s Curse, the multi-national musicality on display had been expanded two-fold by Swedish melodic power rockers Degreed and German melodic metal sextet Mob Rules.

"Derivative of the genre" can be a derogative term but it also works as a catch-all to summarise the style and sound of an act or artist, as was the case in the early set-going for both Degreed and Mob Rules. 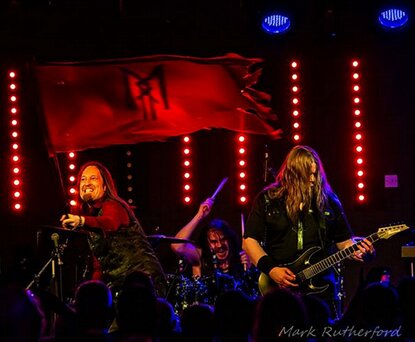 All the above came across sonically loud and melodically clear on opening brace 'Black Cat' and 'Sugar' (the latter leads off the band’s most recent, and best album to date, Degreed) but the meat of the set better identified a band who know how to go about the business of mixing and matching heavy power pop with pacey, double-time rock metal grooves.
'War' firmly sat in the latter camp while 'Tomorrow' and 'If Love is a Game' were melodic balladeering of the most infectious, and back-lit iPhones held high order, respectively.

'Shakedown,' the fifth number to feature from Degreed, fittingly shook with power and purpose before 'The Scam' (from previous album Dead But Not Forgotten) brought the band’s thirty-five minute set to a deservedly well-received close.

Mob Rules, celebrating twenty-five years in the melodic metal business, also showcased what they are all about in the early going.

Power down opener 'Ghost of a Chance' (from latest album Beast Reborn) and 'Somerled,' a rockin' and riffing "Kingdom of the Isles" number guaranteed to get the Auld Alba natives onside ("Scottish pride leads the way to be free!") set the metallic tone, but there’s more to the band (led by the twin guitars of Sven Lüdge and latest Mobster Flo Disybaliz and the rock tenor voice of Klaus Dirks) than power riffage and thunderous rhythms.

The Iron Maiden references are never far away from Mob Rules but not so much in sound-a-like terms as more akin to thematic influence – 'My Kingdom Come' for example is Maiden’s 'Hallowed be Thy Name,' not in song similarity but in scope, weight and memorable song title chorus.
​
Or that would be the comparative case if not for the fact Mob Rules have a similarly titled (but punned) 'Hollowed Be Thy Name' (from the 2002 album of the same name); that six minute symphonic metal number (keyboardist Jan Christian Halfbrodt playing a major part in the sound) closed out a fifty minute set that got the Weegie roar of approval. 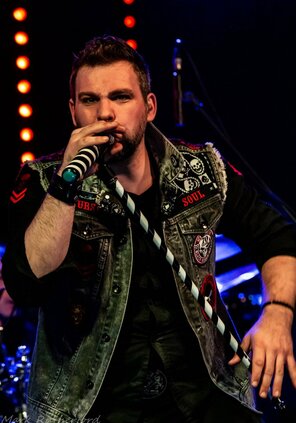 Nikola Mijić, a deceptively powerful vocalist who makes you forget who first put the Eden in Eden's Curse
Not only is Eden’s Curse latest (and it would appear final) release a true Testament to the best of the consistently strong material the band delivered across their five studio albums, it mixes, as presented in fine fashion on the night, the old and new musical Testaments of the band (the core of the group was originally formed around American vocalist Michael Eden (who featured on the first three albums), Paul Logue and German guitarist Thorsten Köhne.

Bolstered in 2013 by the arrival of Serbian vocalist Nikola Mijić (a deceptively powerful singer who made his debut on fourth album Symphony of Sin) and the addition of John Clelland and Finnish keyboardist Christian "Chrism" Pulkkinen, the quintet redefined themselves as an even stronger unit, with the older songs given a new lease of live life.

Opener 'Symphony of Sin' couldn’t be better titled.
It’s symphonically scored opening led to a delightfully sinful six and a half minutes of melodic rock-metal with Nikola Mijić in full vocal cry, backed by a gritty guitar sound and short but effective guitar and keyboard solos.
​
As heard on 'Symphony of Sin' and a number of other songs, Eden's Curse employ a bigger percussive and rhythmic backdrop than many a similar styled band – on the majority of heavier numbers the ever animated Paul Logue plays as many notes as Thorsten Köhne, who proved he’s not the only German lead guitarist who can be melodically fast and fluid on a Flying V.

"Welcome to the Masquerade Ball!" then sang Nikola Mijić on the classic rock meets metal and hook-chorus number, featuring Chrism and Thorsten Köhne in full flow.

AOR metal nugget 'Sell Your Soul' was another highlight as were long-form Eden’s Curse classics 'Jerusalem Sleeps' and 'Jericho' (songs Dream Theater and Iron Maiden would be more than happy to have as their own).

An encore of 'Forever' (the one new song on Testament) and the bristling 'Angels & Demons,' featuring the return of Barbara Clelland in high powered vocal duet with Nikola Mijić, brought the curtain down on what was in every way the very best of what Eden’s Curse have offered these last thirteen years.

The band were loudly applauded off the stage as was deserved; they should also be applauded for the high standards they set themselves in every aspect of their metallic rock and roll endeavours.


"It is with heavy heart that we announce that having evaluated our past and future, we have reluctantly and mutually decided to bring Eden’s Curse to a natural end.

Eden’s Curse have always set the highest standards when it comes to songwriting, album production, artwork, live performances, set design, merchandising, social media presence and interaction with our fans.
Those high standards require significant investment of our money, our time, our families’ time and that of our label AFM Records.

To justify continuing this investment we must see benefits such as ever increasing album sales, concert attendances, merchandise sales, potential live opportunities, booking agency and management interest.
Our evaluation has lead us to this point where it is no longer desirable to continue operating as a band.

We do this with a great degree of sadness but we all recognise that this is the right decision for us at this time in our career and lives. We began our journey together as and mates and we bring it to an end as friends.

Our thirteen years together have brought us many wonderful experiences.
We have been musically fulfilled beyond our wildest imagination and all of us have been dearly humbled by our wonderfully devoted and loyal fanbase. We thank everyone dearly who has supported us.” 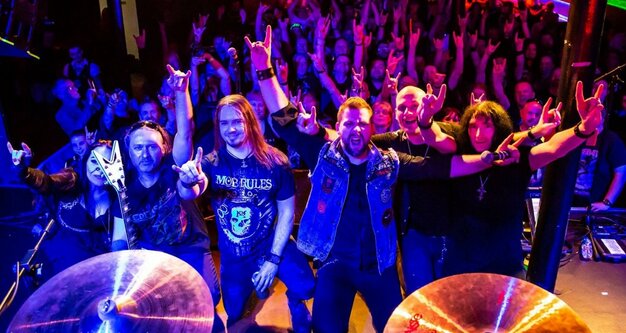