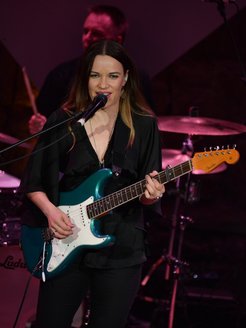 Edinburgh city centre venue The Caves played host to Erja Lyytinen and her band for the Scottish date of her Stolen Hearts UK tour.

Unfortunately the club venue didn’t manage to host anything close to a full house for the Finnish and International blues artist (in part a victim of the "school night" club gig dilemma that has become so commonplace in recent times); disappointing for such an acclaimed and award winning guitarist and vocalist.

That was the only disappointment of the night however and certainly bore no reflection on this fantastic performer, just one of so many hard working and excellent touring acts dealing with the ticket selling difficulties in the live blues and rock club music scene today.

Suffice to say anyone who missed, or misses, this talented and beautiful woman performing live is doing themselves an injustice because at The Caves the Erja Lyytinen Band put on one hell of a gig.

Support on the night came from the locally based Bourbon Street Band, a four-piece soul and blues outfit (always good to see local support getting the chance to perform on the same stage as more internationally known artists, in this case thanks to FabricationsHQ putting the word out and tour promoter Stephen Stanley of Solid Entertainments booking them on). 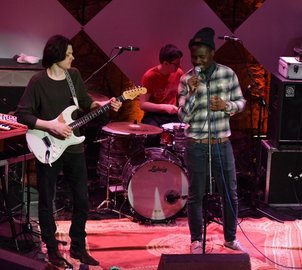 ​Bourbon Street front man Emmanuel James Mathias has a rich and smooth deep tone to his voice, which is suited perfectly to the band’s soul blues style of music.
Guitarist Louis Crosland may well have the look of a young man just out of college, but when he plays his guitar it’s with the skill and confidence of a blues musician who has more years’ experience than young Mr Crosland has yet lived.
​
The Bourbon Street Band also reinforced the fact that Edinburgh and the surrounding area has a lot to offer the live music scene (making the lower than expected turn out all the more annoying).

Even before Erja Lyytinen and her band arrived on stage it was evident from the Ludwig kit rear and centre, the Hammond keys to the left and striking collection of guitars stacked right, this was going to be a quality performance from a quality band.

Erja Lyytinen opened the set with the chilled and beautiful 'City of Angels' from latest and current album, the excellent Stolen Hearts.
The number acted a nice, mellow ease into what was to come, with Lyytinen’s voice sounding great on the night.

The Stolen Hearts tempo is then upped a few notches with the extremely funky and foot tapping shuffle 'Lover’s Novels,' featuring some outstanding slide guitar work by Miss Lyytinen.
By song’s end the audience are in no doubt they are witnessing a special player (it’s easy to see and hear why she is known as The Queen of Slide on the European blues circuit).

Two songs in and already someone has shouted for Erja Lyytinen’s bluesy cover of Tina Turner’s 'Steamy Windows' from her Grip of the Blues album, to which she informs them "maybe a little later!" but instead treats the crowd to a rendition of the deep groove and shuffle number 'Everything’s Fine' from that same 2008 release. 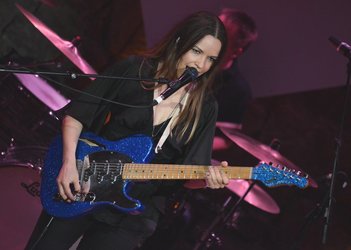 Stolen Hearts is showcased again with two fantastic songs, the progressive blues 'Black Ocean' and 'Slowly Burning.'
The latter is a smooth and slow blues tune played and sang with so much emotion and skill you can’t help but be baffled at the lower attendance for this calibre of musician (you’ll note the recurring theme).

The smaller crowd choir is most evident when Erja Lyytinen attempts to get the audience involved in singing along with her on the current album’s melodic blues rock title track.
​
Sing-a-longs are always easier with bigger crowds of course and she did manage to get a few of The Caves crowd to sing (including yours truly), but it wasn’t with the volume or full gusto response the song and the show deserved (and will assuredly receive at many of her other gigs).

A couple of covers follow, starting with the trad. blues number 'I’m a Woman' by Koko Taylor.
It’s a song that shows off one of Erja Lyytinen’s many multi-styled blues influences and is executed perfectly, with the sassy attitude needed to pull it off.
Just in case anyone was still in doubt about the quality of guitar playing being performed in front of them, the second cover is a great version of the Jimi Hendrix classic 'Crosstown Traffic.'

The set ends with, rather fittingly, a rockin' rendition of 'Rocking Chair,' one of the many stand-outs from the current album and another that features some great guitar playing from an artist that can slip in to many blues styles and slide guitar away to her Stolen Hearts content.

If/ when Erja Lyytinen returns to Edinburgh, or if she is playing near your post code, get along to show your support for one of the most talented blues guitarists and singers on the circuit.