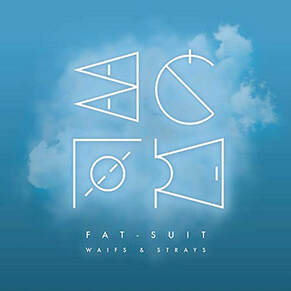 ​Waifs & Strays is the fourth album by Glasgow’s own musical and collective, Fat-Suit.
(And it’s a highly talented collective; many of the band’s players have been finalists in the Young Jazz Musician and Young Traditional Musician of the Year competitions).

The latter-named guest soloist (who has been a feature in Billy Cobham’s band no less) gets the chance to really stretch out on 'Mombasa,' written by Gus Stirrat.
Davie Dunsmuir’s solo in this number is truly astonishing; with such an array of original ideas and virtuosity of execution you will hear a lot more of Mr Dunsmuir in the future (the guitarist has also played with Wolfstone and is part of the Alyn Cosker Group, a seriously tasty jazz-rock-folk outfit).

​But Waifs & Strays is far from being about one song and one guest player because the core members of
Fat-Suit have delivered an album of consistent quality.
Whilst there will always be the inevitable Snarky Puppy comparisons, to this listener and reviewer they are ploughing a different furrow, incorporating elements of Scots traditional music, 70s jazz-fusion and folk.

Album opener 'Rumblings' features a muscular guitar and synth riff which drives the number along while the horn section takes the melody line.
Following number 'Keo' reinforces the 70s jazz fusion inflection with the main riff played as a unison guitar and synth part with brass section stabs and funk guitar.
All of this delivered as tight as the proverbial, with the breakdown segueing into a very tasteful saxophone solo which builds to a crescendo before returning to the opening riffs (with a few diversions along the way). Great stuff.

The 'Crane and the Crow' opens in a more reflective mood before another gutsy guitar riff lifts it up towards another breakdown and a great trumpet solo (it's also telling that there are more dynamics in even just the aforementioned songs than previously evident in Fat-Suit’s work).

'Countryside Quest' does what it says on the tin; its use of acoustic guitar, violins and harp amply demonstrate some of the trad. music influences.
Reducing the horn section input might have delivered a more coherent result but it’s a minor gripe.

'Brum doing a Wheelie' has a pop sensibility with a film soundtrack feel courtesy of the string section.
It features the undoubted talents of both Mark Scobbie on drums and Alan Benzie on synth.

'Caretaker,' which carries a great groove, has been part of the live set for some time while the funk workout 'Uh-Oh' manages to conjure images of Earth Wind and Fire via a jazz-fusion album.
It also features a trombone solo of great skill and musicality, which is matched by the saxophone solo towards the end. This is top notch stuff that is vying for song of the album.

Album closer 'Lunar Milk' drops the tempo and features a lovely melody and electric piano solo with sympathetic string section backing.
This song provides a nice contrast to the rest of the album and is an unexpected but ideal way to round things off.

Fat-Suit have seriously upped their game with Waifs & Strays.
Standout tracks 'Mombasa,' 'Keo,' 'Uh-oh' and 'Lunar Milk' are must-hears but do yourself a favour and listen to the entire album from beginning to end, because this is a band full of great musicians and their song writing skills are catching up fast.

In short, one of Scotland’s best.