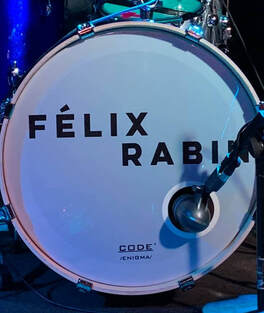 You have to give young and talented French singer-guitarist Félix Rabin serious gig playing kudos for his determination to make an impact on the UK’s blues rock scene.

Only six months after a run of Spring Tour dates in old Blighty, Monsieur Rabin and his band (Niccolò Rebecchi - drums, Vincenzo Capodivento - bass, rhythm/ second guitarist Francesco Gagna) was out on the UK road again, slowly but self assuredly building his still small but growing audience.

And what said audiences receive is a sonically distinct brand of blues rock (that can groove or grunge with equal measure) that sits somewhere between Floyd-esque atmospheres and, when the amps and pedal effects are turned ​up to 11, the full Hendrix.

That crowds should already be bigger, given his talents, is probably fair comment but this is still very early days (a well received support on the Wishbone Ash XLIX tour in 2018 does not a guaranteed blues audience make).

There’s also the issue of stretching too thin across a relatively small geographical location but Félix Rabin just loves to play (and genuinely loves Scotland), so upped the north-of-the-border ante this time around by playing not thee but four gigs in five days (it would have been five shows but the Focus gig in Aberdeen, where Rabin was to support, was cancelled at short notice).

Opening his set with the feisty 'Downs Our Roads' from the 2018 EP of the same name, Félix Rabin and band then moved on to primarily concentrating on newer songs, some of which will feature on his next EP, scheduled for early next year.

There were the obligatory cover exceptions to the new music rule however.
The full-on guitar bombast of 'Voodoo Chile' in power trio format (Francesco Gagna having stepped out for two songs) allowed Félix Rabin to show that he can be as fiery and fast on the fretboard as the next blues rock man.

Following number, a cover of Gary Clark Jr’s brooding, slow-groove number 'Bright Lights,' was never going to match the power of Clark’s full band rendition but it worked very well in power trio format, with Felix Rabin pulling out high-pitched squeals of six-string delight on the solo.
​
While songs introduced over the last year or so always impress – the seriously funky 'Say' and the simple but airy groove of 'Moving On' – newer number 'Walk' was the pick of the bunch; but then Félix Rabin isn’t scared to enter into the territories of bands such as Snow Patrol to create his guitar atmospheres, albeit with more bluesy shades. 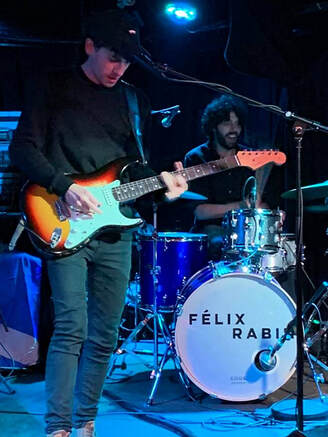 Another Down Our Roads number did feature in the set however, the funky and rhythmic 'I will Be Gone,' which was preceded by Niccolò Rebecchi’s rolling drum intro.

​While the April show at Nice N Sleazy was none too shabby, this six-months on appearance was a step up in song quality and vocality (a soft styled singer, Rabin has clearly muscled up vocally although he still needs a soupçon more vocal presence on some of the weightier numbers).

The only downside to the show was, yet again, the dreaded curfew and a ridiculously early everybody out time to allow a club event to take place.

The curfew also meant support act Stoney Broke (aka Jake Scott) had to start his six song, twenty minute set so early he was in danger of playing to only the girl at the ticket desk and the bar staff.
Thankfully early arrivals (clearly savvy to the curfew consequences) made up the numbers, providing Stoney Broke with a receptive audience to play his singer-songwriter wares to.

The Dumfries based musician, whose clever use of looped acoustic sequences on some of the numbers allowed him to put across nicely delivered electro-acoustic solos over his own backing, delivered an entertaining set courtesy of a selection of not just well written but well sung songs (pick of the bunch being the punchy 'Nothin’ At All' from his If it Ain’t Broke EP).

Stoney Broke also has the knack of being non-genre specific, to the degree that the best description of his songs are hook-driven with hints and mixes of country, Americana, pop and blues.
He’s also not averse to dropping in an audience friendly cover, in this case a delicate and consummately delivered take of the Peter Green/ Fleetwood Mac classic, 'Man of The World.'

The curfew also meant Félix Rabin had to play a slightly truncated set but, shorter set disappointments aside, this was another great showing from Rabin, a musician whose soft vocal style playing against his weighty and distinctive guitar tones mean he’s very much marching to his own blues-tinged beat.
​
Here’s hoping the third time is the UK touring charm next year, when a lot more people are marching with him.