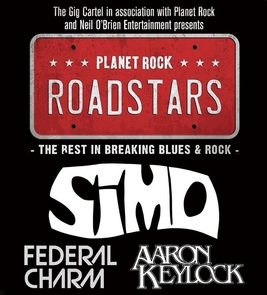 Planet Rock and their Roadstars triple bill tour of SIMO, Aaron Keylock and Federal Charm was billed as "the best in breaking blues rock" but as was unfortunately proven when the Roadstars show rolled in to Glasgow, it can also be a case of being between a blues rock and a hard place when it comes to selling yourselves and your product.

In front of a very small and less than expected crowd the three acts each put on a 40 to 45 minute set that showcased what they are all about as they hopefully head toward being established acts on the circuit with something to say.

Nashville based trio SIMO have already made some waves.
Well-known around Nashville and the south, their second album Let Love Show the Way, released at the top of 2016, made #4 in the Billboard Blues Chart; previous European tour showings led to their first festival headline slot at this year’s Puisto Blues Festival in Finland.

Playing to 6000 at a festival to playing to around 60 at a mid-week club gig with the added bad luck of a major name playing an arena gig in the city the same night (Alter Bridge in this case) is quite the change of musical circumstance, but it also typifies the unpredictability of gig life for the majority of blues rock acts that play the club and festival circuit.
The good news however is these self-same acts never dial it in. It’s all about the love of playing, their appreciation for their audiences wherever the venue and whatever the turn out and delivering each and every night.

SIMO, who opened the Roadstars bill at the 02 ABC2 (the "band on" slots were rotational every night) proved just those points – and then some. 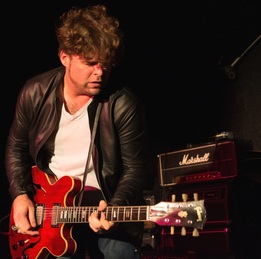 JD Simo has a voice as big as his guitar playing.
On opening number 'Light the Candle,' a big ballsy seven minute swagger of psychedelic blues with moments that seemed to be channelling a Spoonful of Cream, Simo sung the closing verse of the song off-mic with a vocal as strong and reverberating as it was on the microphone.

Strong voiced that JD Simo is, his six-string virtuosity is stronger; firing off notes that were blues coloured sparks, hammering out thick rattling riffs and showcasing some serious slide playing.

JD Simo is not so much backed as perfectly complemented by the rhythm section of Elad Shapiro and Adam Abrashoff.

Elad Shapiro runs off fleet-fingered repeating melody lines while JD Simo extends his solo (a feature of SIMO live is their ability to stretch the songs without losing focus) while Adam Abrashoff is one of the most rhythmic and percussive drummer's you'll see or hear on a small kit.

Closing on the building, crescendo finishing 'Be With You,' the band exited to a roar of cheers, approval and applause that sounded like the entire Alter Bridge crowd had just turned up.

​Aaron Keylock was the unfortunate recipient of "follow that then" syndrome; on the night he couldn’t quite match what had come before, such was the sonic and highly animated impact made by SIMO.

Not that there was anything wrong with the Aaron Keylock trio’s performance or the chunky, rock 'n' roll blues numbers that made up the core of the set – far from it.
Keylock's 40 minute showcase, built around songs that will feature on his debut album (scheduled for a January 2017 release) helped show why the teenager is already garnering praise for his six-string credentials and potential, evidenced on numbers such as the mid-tempo 'Sun’s Gonna Shine' and the Stonesy 'Spin the Bottle.'

With a fair wind young Mr Keylock could well have a solid future in front of him and the set, which closed out on the rockin’ slide guitar and roll of current single 'Against the Grain,' led to the conclusion that the forthcoming debut album is going to be worth checking out.

Manchester’s Federal Charm are a name many a British blues rock fan is already familiar with.
Through previous visits to Scotland the quartet, led by the twin guitar attack of Paul Bowe and lead vocalist Nick Bowden, have also developed quite the affinity with Glasgow and its fans – so while it may have been disappointing to play in front of such a low turnout they are another band that’s never disheartened by such situations.

Delivering a boisterous and predominately up-tempo set culled from their self-titled debut album and 2015’s The Great Divide (plus a cover of Tom Petty and The Heartbreakers 'I Should Have Known It' – a perfect musical fit for the band), it was another excellent across the border showing from Federal Charm, from the rockin’ muscle of 'Hercules' to the lighter, bluesy shades of 'God, Forsaken' and on to set closer and current single the bright and bristling 'Silhouette.'