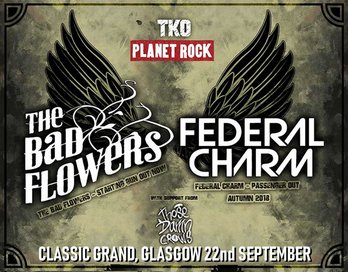 You wait ages for an ear catching rock outfit from Wales to turn up (and there's a fair few, trust me) then the same one appears twice within as many months, across about 800 miles of back and forth travel, as those damn crows fly…

Those Damn Crows were chosen as the Special Guest opening act on the Planet Rock Presents… double headline tour featuring The Bad Flowers and Federal Charm.

The band, who came up to support Scotland’s current champions of hard melodic rock The King Lot back in August at the DreadnoughtRock in Bathgate, opened up a top quality and hard rock edged three band night in the club room of Glasgow’s Classic Grand with a high energy, up-tempo set that caught the attention of those unfamiliar with the five piece from Bridgend and more than pleased those in the crowd who were already fully signed up fans.

Those Damn Crows are also a damn loud band, but their volume comes complete with a big blast of hooks and melodies that help shape their contemporary rock-metal sound.
Fronted by the highly engaging Shane Greenhall (who had the audience won over by the end of the first number), emphasising the guitars of Ian Thomas and David Winchurch and powered by bassist Lloyd Wood and drummer Ronnie Huxford, Those Damn Crows delivered a tight but truncated thirty minute version of their current set.

With most songs lifted from 2016 debut album Murder and the Motive Those Damn Crows showcased both sides of their sound via songs such as the piledriving 'Don’t Give a Damn' and melodically charged fan favourite 'Blink of an Eye' (the latter has fast become an air punching, "hey!" punctuated, anthem).

Weighty new number, 'Behind These Walls,' pointed to Those Damn Crows making the feathers fly when Murder and the Motive is re-released on Earache Records as a tighter, ten track album with two new tracks in October.

It was fitting Those Damn Crows closed their set with the gritty guitars and beefy beats of 'Rock ‘N’ Roll Ain’t Dead,' a song that sums up the modus operandi of all three bands and reflected statements made by Tom Leighton of The Bad Flowers and the Federal Charm’s Paul Bowe during their respective sets.

Messrs Leighton and Bowe both commented on how grateful and humbled they and their bandmates are that rock and roll fans are coming out to champion new bands at a time when the priciest tickets from the biggest or established names tend to pull the sell-outs while the best of the new breed play to busy but seldom full clubs sized venues, sometimes in direct opposition to packed-out clubs featuring Classic Rock covers bands for those who refuse to accept there is no great new rock music out there.

That thank you from Tom Leighton was, outside of song introductions, the only words spoken by The Bad Flowers during their quick-fire but song-packed hour-long set.

The reason behind the limited chat was two-fold; it ensured the band could fit in close to all the songs from acclaimed debut album Starting Gun, released earlier this year, and keep to a timed schedule due to the dreaded curfew, an all too familiar issue at weekends where many a live music night suffers from early start  early finish syndrome, allowing the venue to become a DJ or dance club in to the early hours.

Alongside guitarist and vocalist Tom Leighton are Dale Tonks on bass and Karl Selickis on drums.

Dale Tonks is a four-string dynamo who drives the sound in tandem with Selickis or runs blues groovin’ bass lines that help power the likes of current single 'Who Needs a Soul.'
Karl Selickis’ flailing arm technique, coupled with his extra-long Promark sticks, gives the impression of a man with arms twice normal size but always coming down right on the beat and making that beat big and beefy, as on the heavy blues of 'Secrets' and the boisterous blues rock of 'Rich Man.'

The Bad Flowers set also had a place for a new song that will appear on the band’s second album (scheduled for 2019), the muscular 'Hurricane' (one of the first songs the band ever wrote and a number The Cult probably wish they had come up with first) also featured as did City Lights, which first appeared on the band’s 2016 self-titled EP (both 'Hurricane' and 'City Lights' have deservedly found a home on Starting Gun).

Add in other Starting Gun highlights including the raucous 'Thunder Child' and the heavy riff and roll of 'Lion’s Blood' and you have a Bad Flowers set that, rather appropriately, went with a bang.

Federal Charm have always emphasised the rock in their blues rock but with Passenger album, the band’s recently released third offering, the Manchester outfit have the perfect launch pad to hopefully lift the newly shaped five-piece to sonically bigger and better things.

Tom Guyer’s rock tenor voice and Josh Zahler’s rhythmic groove (a drummer who foregoes the lead footed, big-beat statements for a more percussive and rhythmic approach) were front and centre from the get-go with 'Swing Sinners' (a blues rattlin' and rhythmically rockin' story of murder and townsfolk noose-justice), which opens both Passenger and the band’s current set in fine and feisty, 70s hard rock style. 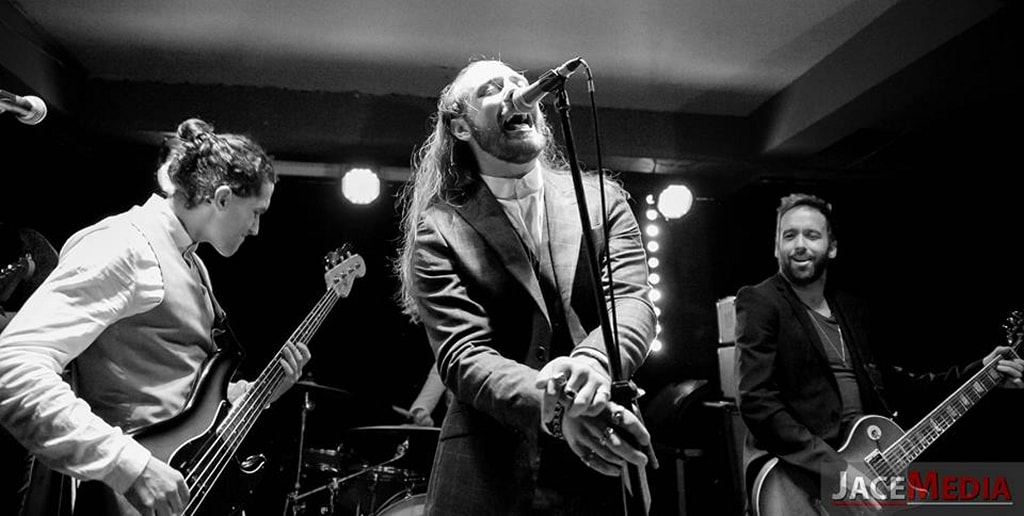 ​But it’s about far more than Guyer’s voice and Zahler’s groove.
Paul Howe’s tasty licks and L.D. Morawski’s rock-solid bass lines, augmented live by fifth member Ross Kyle on second guitars and keys (the latter instrument was unfortunately posted missing in the sound mix), collectively deliver Federal Charm’s biggest and most satisfying live sound to date, in the company of a first class Passenger or seven including the hooky 'Halo,' the hefty 'Choke' and the blues rocking 'Death Rattle,' which lyrically laments for the loss of so many home away from home music venues in the UK.

Equally lamenting, but flitting from reflective moments to heavier passages, was 'Nowhere is Home,' a cry for the rootless who have no specific place to call their own.

Those looking for a dip in to Federal Charm past weren’t disappointed; a few numbers still remain in the set list from the band’s self-titled debut and sophomore release, Across the Divide.
Earlier material getting an airing on the night included the Zeppelin-lite of 'Guess What,' the percussive, funky and rollickin’ 'Gotta Give it Up' and the radio friendly 'Silhouette,' which was dressed in rockier clothing for the occasion.

Talking of dressed for the occasion, Federal Charm won the award for sharpest dressed men of the evening.
The quintet were bedecked in suits, trousers and waistcoats or, in the case of Josh Zahler, dapper braces and shirt.

It’s still relatively early days for Those Damn Crows and The Bad Flowers, although both have already made a bit of an impact in the New Wave of British Classic Rock.

Federal Charm, who have played more gigs and venues in Glasgow than anywhere else (other than their Manchester area home), unquestionably deserve to be playing to bigger venues and larger crowds right across the UK.

Here’s hoping that with album number three, the vibrant and excellent Passenger, the third time proves to be these federals’ charm.