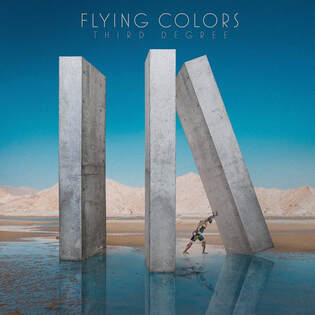 The collective CVs of the band are seriously impressive, but to this listener and reviewer the band’s first two albums were full of potential but patchy.
​
It was therefore with some trepidation that I approached Third Degree for FabricationsHQ review profiling – trepidation that turned out to be completely unfounded…

Opener 'The Loss Inside' makes for a strong start with its ferocious (almost punk) opening riff and a 6/8 twist before settling in to a half-time classy couple of verses with some funk bass and a strong melody.
The following chorus is a killer, anthemic refrain which returns to the opening riff.
After the second chorus Steve Morse provides the type of wicked guitar solo he should be doing with Deep Purple before a Kansas-like instrumental section (of the highest quality) takes centre stage.
The song then returns to the chorus and the opening riff.

Which all leaves you thinking, where did this come from?!

Following number 'More' keeps the standard high.
Opening with a menacing, dissonant guitar riff a great melodic verse and chorus keep the song driving, with Mike Portnoy really on form here.
The song then progresses to an almost neo-classical section followed by a breakdown that builds to a crescendo followed by a short, evil-sounding (not what you expect from the born again Christian rock hands of Neal Morse) synth solo.

After the strong opening salvo, the tempo and intensity loosens off for 'Cadence,' a song that has a whiff of Genesis about it in construction and whimsical nature (it’s not a bad number, it’s just that the first two songs set the bar extremely high).

Following number 'Guardian' allows the rhythm section to really show off their chops.
A track with a great chorus and soaring vocals (the obvious reference point here is YES at their peak), 'Guardian' is another strong effort.

The centre-piece of the album is 'Last Train Home,' which clocks in at ten-and-half minutes long but manages to hold the attention throughout.
A well-crafted piece, with Steve Morse providing the hooks as a counterpoint to the vocals, 'Last Train Home' also incorporates folk-tinged sections – frankly, they shouldn’t work, but Flying Colors pull it off.
As the song progresses the Morses’ trade licks and unison lines before returning to the folk-type section and a big, melodic finish. There’s also some great bass playing from Dave LaRue here.

The aforementioned Mr LaRue introduced next number 'Geronimo' with a funk bass line (there’s no shortage of pops and slaps throughout the track) before the song settles into a more traditional rock groove for the chorus (at just over five minutes long Geronimo is also one of the most commercial track on offer here; there’s even a bit of Steely Dan influence). A killer solo from Steve Morse rounds 'Geronimo' off nicely.

'You Are Not Alone' is a sentimental, melodically framed ballad but one with powerful, stronger together intent (Casey McPherson's lyrics are about the effects of Hurricane Harvey in his hometown of Austin).
Less serious musical contrast is then provided by 'Love Letter,' a groovin’ pop number that is by far the most commercial track on Third Degree.
The latter draws comparisons to 10CC, Queen and the Beach Boys (in the vocal arrangements), which makes for a highly infectious pop song – it may not match the very high standards and progressive strengths of the first half of the album but it showcases the intelligent pop-craft of Flying Colors to fine effect.

Album closer 'Crawl' is an eleven minute tour de force that, in the best prog-rock traditions, has plenty of dynamic light and shade and recurring themes.
Steve Morse absolutely shines with his melodically charged six-string work while the cinematic feel of the song’s closing section is, again, redolent of YES at their (Rabin era) best.

A fitting end to what is a top-notch album from a top-notch band and one that offers even more if you grab the Deluxe Edition of Third Degree, which comes complete with 40 page Photobook, 2 coasters and Bonus Disc.
Said disc features alternative versions of five Third Degree numbers (four instrumental, one acoustic) and a non-album track, the nine-minute 'Waiting For the Sun,' which is rockin’ and proggin’ in equal measure.