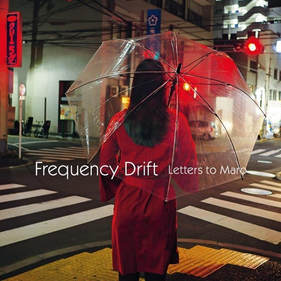 The musical arrangements employed by German progressives Frequency Drift, coupled with the featured use of female vocals and various instrumentation (keyboards, electric harp (and previous use of woodwind and violin) dovetail and interplay with guitars, bass, drums and percussion) is best described as cinematic.

It’s a label Frequency Drift welcome because that's exactly what the Bayreuth based band, formed around the talents of conceptual songwriter, keyboardist and multi-instrumentalist Andreas Hack, were built to create and convey.

Third album Ghosts featured Nerissa Schwartz as both a performer (electric harp) and guest composer. Schwartz, her compositional skills and her instrument (she also plays mellotron and contributes additional synths) would become permanent and integral components of the Frequency Drift sound as would, some three years and two albums later, drummer Wolfgang Ostermann.

Through ever-changing line-ups Hack, Schwartz and Ostermann have become the core members and instrumentalists of Frequency Drift while their cinematic textures, which mix the melancholic with the futuristic, are led by what have been highly effective and at times truly emotive female lead vocals.

Antje Auer, who debuted on Ghosts, and more lately Melanie Mau (who featured on previous album Last,
a darker, more guitar led work) played their parts and left their vocal marks on the works of Frequency Drift but with latest addition, singer and lyricist Irina Alexia, the band have both truly expressive vocality and lyric-writing strength.

Musically, comparisons can, and have, been made to the likes of Magenta, Karnataka and Clannad (at their most ethereal or atmospheric) but on latest album Letters to Maro there are clear vocal comparisons between Irina Alexia and the voices of Magenta’s Christina Booth and the great Annie Haslam, when the latter led a true Renaissance in melodically themed progressive rock.

You’d be hard pushed to find a Frequency Drift album that doesn’t carry some sort of theme and Letters to Maro doesn’t disappoint in that regard.
The songs are loosely connected as stand-a-lone letters through which Irina Alexia tells the story of an individual who has returned to the city life of a youthful past to pursue hedonistic or superficial pleasures, presumably to detract from an inherent loneliness and in an attempt to remove ghosts, and loss, of the past.

Such a setting and concept leads to musical and lyrical moments that range from the emotive, reflective and composed (in both senses) to the starker, unsettling and brink of insanity (the latter brought to life by Irina Alexia on the nine minute piece 'Who’s Master?' a song where the voice of the protagonist (consummately and theatrically delivered by Alexia), slowly changes from one of self-reassurance to a more manic, losing it expressiveness.

The atmospheric title track opens the album, Irina Alexia lyrically setting up the thoughts-through-letters theme as the song evolves in to a soundscape of rise and fall and, in the latter stages, beautifully forlorn notes.

Retaining the forlorn but in more melancholic terms are the sounds of the rhythmic & percussive 'Underground' ("way below the surface, memories run along arteries of steel…") before the electro synth-pop and electric harp chimes of 'Electricity' deliver the most accessible song on the album (making it no surprise an edited version was chosen to be the first single lifted from the album).

The six minute 'Neon,' interspersed with rockier passages (Michael Bauer, a member of the live band, plays additional guitars on the album) isn’t too far removed from something Magenta would come up with while 'Izanami' and 'Nine' are the sort of atmospheric, slower pieces Karnataka excel at (the former’s weightier
mid-section and the latter’s melancholic air and short, cinematic finish are all Frequency Drift however).

Other highlights include the more delicate and spacious 'Deprivation' (the closest thing to a ballad on the album) and 'Sleep Paralysis', a primarily keyboard and synth textured number that is musically soothing yet lyrically disconcerting ("I want to scream so you’ll come back, but there’s no sound… my body’s fast asleep, my brain is wide awake").
'Sleep Paralysis' also acts as the perfect precursor to the aforementioned 'Who’s Master?'

Letters to Maro is the band’s most rhythmic work to date and one of their most intriguing releases; it takes a few plays to truly catch the cinematic mood and progressive pulse of the album but once immersed in its sound and concept it becomes a compelling listen.