Gigpledge - where fans and artists unite 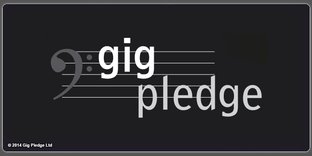 “Sometimes you find that the band will outnumber the audience; that can’t be right.”

That quote, from musician and songwriter John Young, touches on a serious dilemma facing hundreds of bands across the length and breadth of the UK and thousands across the globe.
How to survive in an industry that has changed dramatically in the last couple of decades and beyond all recognition in the digital (and not necessarily legal) download Day and on-line streaming Age.

Gigpledge, thousands of hours in the planning, creating and implementing by John Young and business partner Barbara Ann May, is taking its first tentative steps towards fighting back against that ill-divided industry by helping artists connect with their fans and potential audiences.
Fans and artists signing up to gigpledge can get involved directly, join forces and pledge money to hopefully bring their favourite artist or act to their locale.

Musical “crowd funding” campaigns are not new, but gigpledge offers an opportunity to take it to a whole different level.
And gigpledge, as a concept, is ever-evolving; other ideas include involving live venues, bookers, agents and promoters.
Collectively, all involved will have one common goal – to combat the financial inequalities in a system where the artist/ songwriter is the second-class citizen, separated from his or her creation/ artistic work almost as soon as he or she has given birth to it.

Redressing the musical balance starts with the live event, primarily because the number one way for the majority of bands and musicians to make any sort of living is through the live show.

The uber-successful artists – Lady Gaga, U2, Bon Jovi, Bruce Springsteen, Beyoncé (the Queen Bee of MTV), Elton John (the true Queen of England) and the other Platinum sellers – are all on safe ground.
Just about every major name in rock and pop could release product that ranges from the musically sublime to the ridiculously disposable (and some of them have) and it would still sell.

Then there is the Cult of Celebrity, the dominant force in what passes for entertainment these days.
It’s also the reason artists (and I use the term “artists” in its loosest sense) such as Justin Bieber and Miley Cyrus won’t have to worry about their next pay cheque any time soon.

But that’s a small percentage of the recording artist industry – an extraordinary amount of working musicians struggle to make an honest buck, and not because they are all producing a high volume of mediocrity.
There are dozens upon dozens of great singer-songwriters and bands out there not getting a fair crack of the whip because they are sucked in to a system where the owner of the product created is at the back of the queue come pay day. 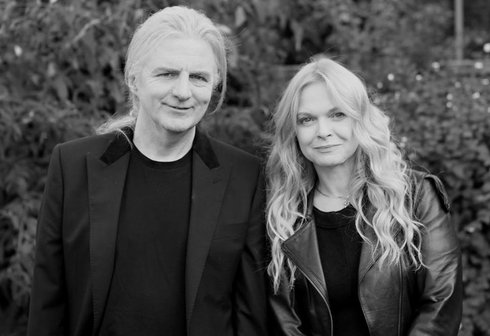 John Young and Barbara Ann May, gigpledging their allegiance to the flag
of the artist, and to the cause for which it stands, with royalty justice for all.

Nobody, and I mean nobody, predicted the size, scope and impact of the digital tsunami that hit the music industry or the damage done in its wake.

On the face of it, music that is instantly downloadable or readily available on-line should be a win-win for both fan and artist but, sadly, it's more likely to be a win-lose for the listener and musician respectively.
Because what 95% of the music buying and music listening public fail to realise is the majority of the music’s creators – the songwriters with ownership and royalty rights – get very little out of this financially.

This is the musician’s job, not just his or her artistic creation – they have to pay bills and put food on the table just like the rest of us.
Getting product out there quickly/ digitally helps spread the musical word but it doesn’t guarantee a decent pay day – the Spotify’s of the world stream music with a pittance back to the artist while Grooveshark have been guilty of streaming without any authorisation, thumbing their nose at copyright-infringement lawsuits.

All of which means any royalties received by the artist/ songwriter make the Minimum Wage look like a Banker’s Bonus – one third of a penny/ cent per track played or downloaded is about as good as it gets.
But usually it's a lot worse, even for the most successful artists in the industry – in 2009 Lady Gaga made it known that one million plays on Spotify of her hit ‘Poker Face’ earned her the princely sum of $167.
That claim has never been denied, commented on or countered by the popular streaming service.

From iTunes to iKnow a dodgy download site in Eastern Europe where I can grab my favourite band’s new album for 59 pence, there is very little money in this for many an honest artist.

And while fans and audiences are happy to bend credit cards to breaking point for a Live Nation/ Ticket Master event and check the local gig guide to see when the next partially reformed classic rock band (or classic rock brand) is coming to town, the equally talented (and in some cases more talented) acts struggle to get so much as a support slot.

Tribute bands are more popular than ever; audiences are swept along on a wave of pop or rock nostalgia while the greatest hits of the greatest groups are sung-a-long to.
I firmly believe the best tribute acts deserve their place in the current musical market place, but while many such acts play to sell-out crowds in good sized halls and theatres the artist or band with something new, fresh and innovative to say is playing in the local coffee bar or on a pub stage.

Which brings us back to gigpledge and the comment from John Young.

A classically influenced keyboard player with outstanding pop, rock and progressive sensibilities, John Young has recorded, toured or worked with a veritable who’s who of the pop and rock world including Uli Jon Roth, The Strawbs, Greenslade, Paul Rodgers, The Scorpions, Asia, John Wetton, Fish and Bonnie Tyler.

John Young is also a gifted songwriter and composer; his accomplished back catalogue includes solo albums in the singer songwriter mould and instrumental collections that range from modern, synth-driven releases to ambient jazz and Eastern/ Indian influenced pop.

Young also performs with his own band and in 2013 put his voice, keyboards and songwriting skills to Lifesigns, the melodic progressive outfit that breathed new life into a genre that is, ironically, showing little sign of true musical progression.

Yet even with that musical CV John Young is no stranger to receiving Broadcast Royalty cheques (that he had to fight tooth and nail for) that make Miss Gaga’s Spotify pay-out look like a six numbers and the bonus ball Lottery win.

It's early days for gigpledge, which went live in February, but already a number of artists and music lovers have signed up.

If you are someone who supports music and supports the rights of the creators of that music, I don’t recommend you sign up to gigpledge – I implore you to.

Gigpledge have announced that for a limited period artists (solo, bands) and venues can receive their first year's membership for free.
Any artist or venue wishing to join gigpledge or take advantage of this opportunity should contact the team at promo@gigpledge.com
On doing so they will be given a unique promo code to receive their free membership.

The promo codes will last for seven days; artist and/ or venue page must then be completed within one week of activation.
A token system (a tool that will help artists retain free membership on the site over the years to come) is also going to be implemented shortly.