The mother of all performances
Glenn Hughes - The Garage, Glasgow, 24th January 2017 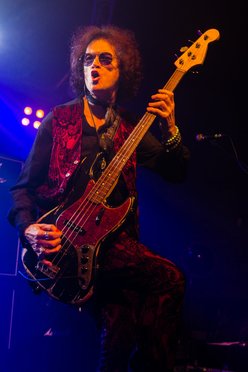 Fifteen months ago Campbell Stewart stepped in to wax lyrical for FabricationsHQ about Glenn Hughes at The Garage while yours truly headed over to the other side of the street (after catching a Stormbringer of an opening from Hughes and band) to cover a club venue show by blues rockin’ songstress Chantel McGregor.

It was the perfect win-win scenario. I caught an outstanding set from Miss McGregor while Mr Stewart, who loves his rock to be spelt r a w k, had that delivered in spades by a "five star performance from Glenn Hughes, Doug Aldrich and Pontus Engborg."

Fifteen months later Glenn Hughes was back in town but this time the reviewer who crossed the road wasn’t going anywhere else (and there were plenty of choices), for a couple of reasons.

First, Glenn Hughes was touring on the back of Resonate, his best solo album to date and given the FabricationsHQ nod as Best Rock Based Release of 2016.

Secondly, Hughes had reunited with favoured guitarist Soren Andersen (their on-stage and studio dovetailing seems to bring out the best in each other) while also adding Hammond and keyboard player Jay Boe to the line-up; all of which meant the classic back catalogue and Resonate songs were guaranteed to be given the sonic depth and delivery they deserve.

That’s another Win-Win, with capital W’s.

But what made a truly exceptional show all the more remarkable was that it could as easily have been a Lose Lose, with capital L’s…

As most rock fans will know the entire Resonate UK & European tour had been postponed / rescheduled and as unluckiness would have it the only available Glasgow date for Glenn Hughes was a return to The Garage on a night where you couldn’t walk past a venue without a band playing.
The White Buffalo and Tyketto were playing just a stone’s throw away to cite just two examples but the more worrying ticket-sales aspect was the knowledge that the majority of Glasgow rock fans would be paying homage in their thousands to witness The End of Black Sabbath at the SSE Hydro Arena.

It was therefore conceivable that Glenn Hughes could have found himself playing to not much more than the road crew, The Garage bar staff and Stone Broken, who delivered a well-received, half hour set in support.
(the West Midlands band also proved, through songs such as new number 'Just a Memory' and the crunching 'Not Your Enemy' from debut album All in Time, that melody and gritty, post grunge rock can mix).

Glenn Hughes knew Black Sabbath were playing Glasgow when rescheduling his own date in the city but, as he would confirm during the show, there was nowhere else he wanted to be this particular night (Hughes has a genuine love affair with his British fans but an equally genuine soft spot for Glasgow that goes back to his earliest teenager-in-a-band days).
More importantly, being on the road is the musical anchor that keeps him grounded while having to deal internally and emotionally with the fact his mother, Sheila, was very ill, something he doesn't discuss openly on Social Media but is more than comfortable talking about in front of a few hundred of his closest friends.

As it was, those few hundred friends witnessed a gargantuan performance from a man whose thoughts were clearly elsewhere but who positively thrived on the energy and love of the live show and the crowd who came out to see him and his Scandinavian band of musical brothers.

'Flow,' from Resonate, didn’t so much open the show as positively swagger out the speakers before a Hughes Thrall classic introduced itself, dressed in beefy power chords, melodic Muscle and Blood-y hell Glenn Hughes is on ridiculously good vocal form tonight.

Such was the funkiness of the guitar tones that introduced 'Gettin' Tighter' you could be forgiven for thinking Soren Andersen was channelling the six-string spirit of the late, great and sadly missed Tommy Bolin.
The extended instrumental section of the number featured Glenn Hughes funkin’ the very life out of his four stringed weapon of choice, proving (if it still needs proving) that he’s not just a good bass player but a great one.

From there on in Glenn Hughes and band could do no wrong – highlights among many included the Resonate song 'Stumble & Go' which crackled with heavy, psychedelic energy… the dark and brooding Trapeze classic 'Medusa' was, much like its title, an absolute monster (punctuated by Soren Andersen’s howling lead lines and seemingly effortless clean and piecing vocal highs from Hughes)… 'Can't Stop the Flood' and 'Soul Mover,' perennial favourites, gave the crowd the chance to flex their own vocal muscles,

It was a full on, rock 'n' roll set but the heavy rock soul ballad 'You Keep on Moving' was a highly charged and atmospheric show stopper.
On a night where the Come Taste the Band classic was performed in memory of not just Jon Lord and Tommy Bolin (the usual dedication) but sung for his mother, Glenn Hughes' now trademark vocal finale was delivered in such reverence (and applauded post-song for a full minute) that he damn near transcended to another level of vocal purity (which didn’t go unnoticed by his band-mates, particularly Soren Andersen, who was visibly moved).

Hard act as it was to follow, 'Might Just Take Your Life' got the crowd back to full voice, further enhanced by some serious Hammond grooves from Jay Boe.
In fact special mention must go to Jay Boe (replacing the brilliant Lachy Doley, who played on Resonate but couldn’t make the rescheduled shows); the Copenhagen keyboardist played his part across the whole show, adding Hammond colour and keyboard sparkle in equal measure.

Set closer 'Black Country' rattled along the tracks at a helluva pace but was kept on the rails by the on point, powerhouse drumming of Pontus Engborg; the one-two encore punch of 'Heavy' (if ever a song was well-named) and a ferocious, full throated rendition of 'Burn' then put the exclamation point on an extraordinary gig that Glenn Hughes "will never forget the date of."

And of all the Glenn Hughes shows I’ve listened to or attended, I’ve never heard him sing as well as he did on the the 24th of January 2017, when he delivered, quite fittingly, the mother of all performances.