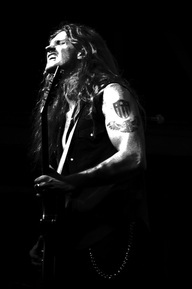 Jared James Nichols is a force of blues rock nature.

Recent debut album Old Glory and the Wild Revival got the Wisconsin born, LA based singer-guitarist some deserved attention but it doesn’t prepare you for the unfettered energy of Nichols in the live environment.

Bolstered by the solid, groove-laying rhythm section of Erik Sandin (bass) and Dennis Holm (drums), that
on-stage energy isn’t just apparent, it’s tangible, especially on numbers such as the full-on 'Blackfoot' (featuring some great, pacey blues licks from Nichols) and the vibrancy of performance that comes across on the fun boogie of 'Can You Feel it?'

Nichols also likes to throw in a cover or two and current cover favourites include Robert Johnson’s blues standard 'Come On in My Kitchen' (which also features on Old Glory) and Rick Derringer’s classic 'Rock & Roll Hoochie Koo.'

But Jared James Nichols and band left the best to last, delivering a bombastic version of album opener 'Playing for Keeps' (where the School of Hendrix meets contemporary hard rock head on) before closing with another cover, a feisty and robust take of Mountain’s 'Mississippi Queen.'

In a quirk of reviewing fate I had to leave after fifteen minutes of a Stormbringer of an opening from Glenn Hughes to catch the talented Chantel McGregor, who was playing quite literally across the road (McGregor, like Jared James Nichols, is another seriously good up and coming blues rock artist to look out for). 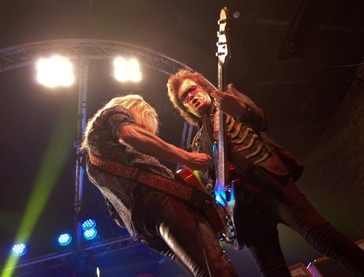 From the opening salvo of 'Stormbringer' and 'Orion,' and the crowd’s reaction, it’s obvious this was going to be a good night.
Glenn Hughes positively drove Deep Purple’s 'Stormbringer' along with his pumping bass lines and bounded around the stage during 'Orion' with the energy – and voice – of a man half his 64 years.
Doug Aldrich too is on fire, thoroughly enjoying himself now that he is outside the confines and constraints of the Whitesnake set up.

Indeed the current Glenn Hughes band is for many, this fan and reviewer included, a power-trio dream team.
It features the talents of not just Doug Aldrich but the superb Pontus Engborg, the perfect drumming foil for Hughes' pounding bass riffs.

After 'Orion' the set hit one of many high points for long-time fans – 'Way Back to the Bone,' an explosive slice of funk rock from Hughes' Trapeze days, gave Doug Aldrich a chance to show his versatility at playing something a little bit different from those Whitesnake licks.
​
Things slowed down slightly for 'First Step of Love' from the classic Hughes/Thrall album before it was time to return to the Trapeze catalogue for 'Touch My Life.'

Unsurprisingly the Deep Purple back catalogue was raided a few times but it wasn't always the Usual Suspects – a jammed out, extended version of 'Sail Away' made an appearance while an even bigger surprise was the inclusion of Whitesnake’s 'Good to be Bad,' from Doug Aldrich’s time in that band.

The performance of the ‘Snake song (which segued neatly in to a solo showcase for Aldrich) is probably as good as you will ever hear it live, but it was totally eclipsed by an epic, soulful version of the Deep Purple classic 'Mistreated' featuring a stunning vocal from Glenn Hughes and fantastic guitar work from Doug Aldrich.

From 'Mistreated' to set end the band are cruising: 'Can't Stop the Flood' was followed by the Black Country Communion favourite 'One Last Soul' before 'Soul Mover' closed out the main set.

A one-two encore punch of 'Black Country' and a blistering performance of another Purple classic, 'Burn,' finished off an outstanding ten minutes short of two hours set in style.

This was a five star performance from Glenn Hughes, Doug Aldrich and Pontus Engborg; in this fan and listener’s opinion it’s also the best band Hughes has played in since Deep Purple.

All that’s missing therefore is an album of all-new material from this trio.