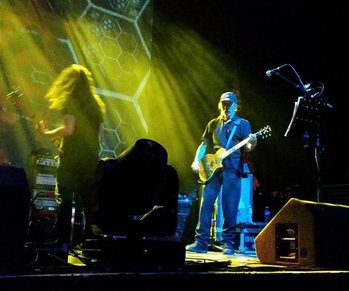 Bookshops and publishers up and down the country are no doubt scratching their heads at the recent upsurge in orders for a century old science-fiction story entitled The Machine Stops by E.M. Forster.

The reason for the current interest in Forster’s little known dystopian fantasy?
Well, apart from the fact much of it is relevant to the state of today's world, Hawkwind are touring to promote their latest release, a concept album based on the story and carrying the same title.

Further, if you have ever been to a Hawkwind gig (around the thirtieth for this Hawkfan), you'll know it's never just a concert – it’s a full on sensory experience with the music enhanced by psychedelic screen projections and the use of dance and mime artists on stage.

At a packed 02 ABC in Glasgow the "Jockwinders" were out in force along with a huge travelling contingent from around the UK as well as fans from as far away as Italy – not bad for a band in the autumn of their career (but with their star in the ascendant in recent years).

The show itself starts off quietly, the introductory passages from the album building towards the refrain of opening number 'All Hail The Machine.'
As the band saunter on to the stage the audience are made aware illness has knocked keyboardist "Dead Fred" (aka Phillip Reeves) and the dancers for six; fortunately other keyboardist Niall Hone had not succumbed and even with their absence the Hawks’ went on to deliver one of their best shows in many a year.

"Mr Dibs" has become a much loved front man and focus for the band on stage, working his way to that position after formally joining the band as bass player in 2007.
Dibs delivers the singing and spoken-word parts of the back catalogue classics superbly, possibly as well as they've been performed since the 70s and the Robert Calvert days.

The rhythm section are in fine form, underpinned by one of the most under-rated drummers on the planet, Richard Chadwick, a twenty-eight year veteran of the band (unusual longevity given the revolving door of musicians who have passed in and out of the band over the decades).

​Channelling a chunk of Lemmy-esque stylings on his Rickenbacker, the nineteen year old Wheaton has also managed to make his own mark on the sound of the band in a very short time, highlighted wonderfully on classics such as 'Orgone Accumulator' and 'The Watcher.'

There can’t be many bands where the age gap between oldest and youngest members is a remarkable fifty-five years, which brings us to the guv'nor and captain of the good ship Hawkwind, Dave Brock.

Turning seventy-five years young later this year and band leader since the group’s inception in 1969, Brock is seemingly ageless and (given his persona and performance at Glasgow) happier than he’s been in years.
His trademark crunchy, chugging riffs are all over the new album and this show, while the loving-every-minute-of-it interplay between Brock and young Haz Wheaton is a joy to watch.

As regards The Machine Stops the set is based around the album; most of the songs from the band’s UK Top 30 success are aired but with a number of Hawkwind classics woven seamlessly into the ongoing storyline.

Talking of classics, it was pretty special for this long-time Hawkwind fan to hear the likes of 'Utopia,' 'Shot Down In The Night' and 'You Better Believe' performed, and performed so well.

As mentioned earlier, this is a band in the autumn of their career (or you would think).
But, on this live form and with the quality of this line-up?
Let’s hope the machine doesn’t stop for a long time to come.