Quirky, Strange and Charming
Hawkwind – The Road To Utopia 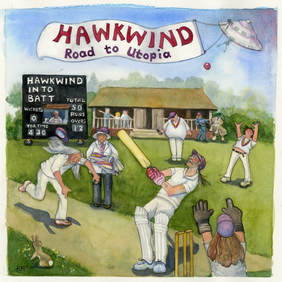 Space rock kudos to Hawkwind; nearly fifty years on they continue to write, record and release new material, and pretty solid material at that – the band's last two studio outings, the conceptual The Machine Stops and its “continuation” album Into The Woods, were well received by fans and critics alike.

But every so often there’s the inevitable compilation, archive release, live album or Best Of.

Road to Utopia is another look back but benefits from being an interesting choice of older songs in re-recorded clothing, tailored by founder and ever-present Dave Brock, Richard Chadwick, Mr Dibs, Haz Wheaton, Magnus Martin and songwriter, producer, conductor, arranger (and head Womble) Mike Batt.

Road to Utopia actually begins by following the road to Mexico.
Opener 'Quark, Strangeness and Charm' is Hawkwind meets mariachi band and why not; the Mexican styled makeover applied to the title track of their outstanding 1977 album works ridiculously well and is a lot of fun.
Not so much Hawkwind as Hawkswing.

Following track 'The Watcher,' from 1972's Doremi Fasol Latido, was Ian Kilmister’s first composition for Hawkwind (the band’s then bassist would, of course, become better known as Lemmy; the legendary and sadly late rocker also recorded a version of the song with Motörhead).

On Road To Utopia 'The Watcher' is given a bluesier, looser arrangement that features guitar from no less than Eric Clapton, Mike Batt on piano and harmonica punctuations from Dave Brock.
Its re-recording might well be a tribute to Lemmy but its main impetus is to reinforce the lyrical thought that we are killing our planet – "your avarice destroyed your sphere and there's no room, for you, out here…"

It’s no track sequencing coincidence the following song is 'We Took the Wrong Step Years Ago,' the perfect didn’t-heed-the-warning sequel to 'The Watcher.'
The song is acoustically shaped much like the original but the space-synths have been replaced by Mike Batt’s subtle and poignant string quintet orchestration.

The band’s short-lived adventures as the Hawklords are recalled by three numbers that featured on their 1978 album, 25 Years On.
'Flying Doctor' has horns and Madness (both the band and the musical foolishness) added to its none-too-serious new-wave sound; the pacey and damn near danceable 'PSI Power' (here named 'Psychic Power') is another that benefits from added horn appeal.
'The Age of the Micro Man' (preceded by acoustic and synth-backed instrumental 'Hymn to the Sun') has strings, an atmospheric, percussive backdrop and a lamenting saxophone; all of which bring a little warmth to what was an intentionally colder number first time around.

The band close out the album by getting their Hawk-prog on for the seven minute, Hawkwind and Mike Batt collaboration, 'Down Through The Night.'
Following a short acoustic guitar and strings intro piece, the song builds with both string quintet and full band featured before a slightly jazzy and short vocal section sets up the second half of the primarily instrumental number; frenzied guitars are backed by punctuated orchestration, a driving rhythm and a closing section that harks back to the heavy acoustic space-rock vibe of yesteryear.

'Down Through The Night' is a great finish to a great album but given the fun the band were clearly having putting this project together and Mike Batt’s creative input and contribution, it’s a wonder they didn’t drop in a cover of 'The Wombles Theme' as a hidden bonus track (sorry Mike, but even more than forty years on it comes with the furry bodied and pointy-nosed territory).

But this isn’t the Road to Wimbledon Common; this is the Road To Utopia and the ever quirky, strange and charming Hawkwind as you’ve never heard them before, travelling a reworked path that’s well worth the journey for old and new fans alike.

Ross Muir
FabricationsHQ
'Quark, Strangeness and Charm' and 'The Watcher' are available now as digi-download singles.
Road To Utopia will be released on Cherry Red Records on September 14th.