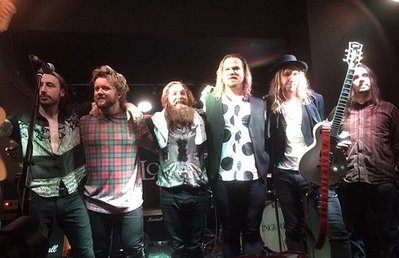 Hot on the heels of a European tour as guests of The Winery Dogs, Inglorious embarked upon a headlining tour of the UK in support of their highly anticipated and just released self-titled debut album.

The club-sized tour (probably for the first and last time based on the ticket selling waves these new kids on the rock block are making) included an appearance at The Flowerpot, a small and intimate venue in Derby.

Inglorious hit The Flowerpot stage to a full house and slammed out the first three songs from the album – the gritty and bluesy 'Until I Die,' the heads down 'Breakaway' and the mid-tempo riffage of 'High Flying Gypsy' –in the same, high-energy fashion as their studio counterparts.

The band, complete with keyboards for the tour, then kicked in to a cover of Rainbow’s 'I Surrender' before returning to the album for the slow melodic grunge of 'Bleed For You' before delivering a thunderous version of 'Warning.'

Front man Nathan James was in fine form as were his powerful set of pipes – so much so that he comfortably engaged in a wailing duet with Andreas Eriksson’s equally wailing guitar during the aforementioned 'Warning.'
As regards the band’s lead guitarist, think of a young Ritchie Blackmore (albeit with blonde hair) in appearance and mannerisms as well as a man who is no slouch on the guitar himself (nor is second guitarist Wil Taylor, a pretty mean axe man in his own right).

The band and album’s swaggering title track was followed by a bass solo from Colin Parkinson, backed by his rhythm partner Phil Beaver (who, as a pairing, are already developing in to quite the driving force).

A band with only one album under their belts are almost certain to have a number of cover versions up their hard working sleeves and the second of the night, a great version of Toto’s 'Goodbye Girl,' was preceded by Nathan James professing that the American melodic rockers are the band’s favourite group.

The punchy 'You’re Mine' and the bluesy 'Holy Water' followed in quick succession before the third and final cover of the night, a rip-roaring version of Deep Purple’s 'Lay Down Stay Down' set up the final song of the main set, the ballsy blues rock of 'Girl Got a Gun,' all to a sealed roar of approval from a very vocal Flowerpot crowd.

Those not familiar with The Flowerpot will
not be aware of just how small the stage is
when adorned with six musicians, a drum kit, keyboards, guitars, amps and associated accessories – to such a degree that it’s not practical to leave the stage and come back
on for an encore.

The band therefore, rather ingloriously (sorry), "hid" on the stage before cranking
it up one more time for an encore of their debut album’s final song 'Unaware,' a number that is as big a closing statement
as 'Until I Die' is an opening one.
The one album track posted Missing In Action was the acoustic based 'Wake,' an unfortunate omission given that it's one of the strongest songs on the album and would have made for a great, mid-set change of pace.

However missing acoustic guitar aside (and it’s doubtful they could have found space for it on the stage), and based on this performance, Inglorious could well be on their way to a Glorious future.