A heavy and weighty volume
Iron Maiden – Book of Souls 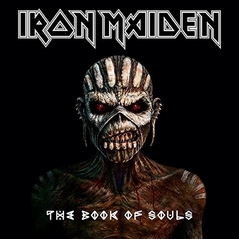 I can still remember the excitement in 1982 when we placed Number of The Beast on the turntable and were blown away by the combination of twin guitar riffage, galloping basslines and vocals screaming into the stratosphere.

It was cool then and by crikey it’s still cool now, as thirty-plus years on Iron Maiden come up trumps with album number sixteen The Book of Souls.

But then, unlike so many of their metal contemporaries who are falling by the wayside creatively and retreating behind the lines to greatest hits legacy tours, Iron Maiden seem determined to bring something different to the table with each new release.

That said this reviewer was a bit "meh" when the band announced The Book of Souls would be their first double album as the tried and trusted Maiden song formula can become a little predictable.
However spreading the material across two discs works well, makes sense (given the balance between the shorter songs and the longer epics) and for "double album" read the equivalent of a good C90’s worth of material (that’s a C90 cassette tape for you young ‘uns…)

The Book of Souls was also the first Iron Maiden album to be written in the studio while recording at the same time, a change from band leader and bassist Steve Harris arriving with the lion’s share of material pre-arranged.

It’s a policy that has paid dividends – the wider spread of writing credits and contributions has made for one of the band's most satisfying albums.

Iron Maiden’s recent albums have been moving more towards the longer-form song, the band influenced by the growing popularity of progressive metal pioneered by the likes of Dream Theater (themselves influenced as teenagers by Maiden’s early albums).

However, while DT and their ilk get carried away with the need to show off their technical chops amid endless solos, Iron Maiden are savvy enough to keep a "song-first" focus and avoid such self-indulgence, keeping their material accessible – which is probably why their popularity still overshadows that of their successors.

Highlights this time round include the opener 'If Eternity Should Fail.'
Iron Maiden are getting pretty creative with their lead-in arrangements these days and 'Eternity,' written by front man Bruce Dickinson, is built around echoing vocals and synth backdrops, gradually raising the tension before the full band crash in.
And this time they manage to sustain the drama all the way through to the end of the song, avoiding the potential anti-climax of the main song not living up to the promise of the intro.

Pre-album and music video release 'Speed Of Light' is much more in the traditional Iron Maiden headbanger style and moves the proceedings up a gear, Bruce Dickinson’s chorus roaring above the charge of the guitars.
One of two Dickinson-Adrian Smith penned songs (the other being rollicking Side Two opener 'Death or Glory'), 'Speed of Light' is a fine example of material written by Dickinson and Smith being stronger than that brought to the table by Steve Harris.

Not that Steve Harris is any slouch in the writing department – the Harris penned The Red and the Black continues to be the stand-out track, even after repeated plays of the album.
The song has the traditional chant-chorus that will go down well live, but it’s also a genuinely uplifting tune and has one of the strongest melodies of the album.

Closing number 'Empire of the Clouds,' the other Dickinson penned song, is the track which has stimulated the most pre-release chatter and is a departure from the traditional Iron Maiden sound (at least for the main themes), which revolves around Bruce Dickinson singing along to a simple piano and strings arrangement.
"Iron Maiden? Piano? Strings?"
Yes and it works beautifully, providing a poignant backdrop to the story of the ill-fated British Empire airship R101 (and as a qualified pilot himself Dickinson is clearly singing from the heart).

Even when the rest of the band enter the fray on 'Empire' they add to the growing drama of the track; the playing is admirably restrained to underpin – not undermine – the body of the song.
'Empire of the Clouds' is something fresh from Iron Maiden and it shows they’re still keen to push themselves into new areas.

In closing, it might be Steve Harris’s band but it just doesn’t work without Bruce Dickinson’s contribution, and this album is a real triumph for the singer.
Not only does he bring the best songs to the party, but he’s been fighting throat cancer at the same time (happily now in recovery); his voice may be a little thicker with age but it’s still there and in match-fit form.

The band have hinted that there’ll be another album after this one, but with The Book of Souls, Iron Maiden have produced an album that could fittingly close their impressive career.
Paradoxically, it also raises the bar impossibly high to try and top with their next release.
Not bad for a bunch of heavy-metallers about to hit – or in the case of 63 years young Maiden drummer Nicko McBrain already beyond – the big Six-Oh.