Charting the Future
It Bites - Map of the Past 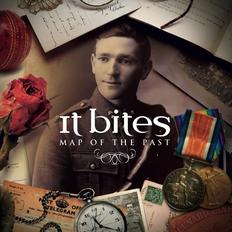 Map of the Past is the second post-comeback studio album from the re-imagined version of hard pop and melodic prog exponents It Bites.

Map of the Past is also an excellent collection of fresh-sounding songs written over the course of last year by John Mitchell (lead vocals, guitars) and John Beck (keyboards) and linked by a conceptual theme set 100 years in the past.

John Mitchell has quite the modern prog CV behind him already, but Map of the Past is, quite simply, the strongest body of material Mitchell has yet featured on.

And for all the plaudits received for Picture (the 2006 album by Kino that featured Mitchell and Beck) and 2008’s The Tall Ships (the band’s previous release), this latest release is the best work the pair have done together.

The line-up is completed by drummer Bob Dalton (the other It Bites ever-present along with Beck) and bass player Lee Pomeroy and their own contributions play a significant part in the finished product.

Map of the Past takes the listener on a journey back in time to a Britain that was entering a defining period in its history – the start of the 20th century.
There’s also a little can-the-past-be-changed premise.

Starting with the sound of a old radio being tuned in and out of various stations and ending with a news broadcast of a possible alternative Titanic story (part of the short final track 'Exit Song'), the album contains eleven tracks all perfectly weighted in pace and length (there are no overly-long prog noodlings here with only two of the numbers over six minutes).

Collectively the songs deliver an extremely accomplished slice of modern progressive rock, complete with the interesting but not over-bearing theme.

’Man in the Photograph,’ as the name (and album cover) suggests, sets the scene with Mitchell’s vocal serving as an introduction over a harmonium-sounding backing from Beck.
The song then subtly builds before kicking into the more traditional modern prog of ‘Wallflower,’ all edgy prog and roll, punchy chorus and Beck synth solo.

The obligatory nods to classic progressive rock are also in evidence, with some Gabriel-era Genesis influences on a number of the tracks, best exemplified by specific sections on 'The Big Machine' (at one point I thought the song was going to segue right into part of the instrumental sequence from 'Firth of Fifth').

There is also a hint of Peter Gabriel in Mitchell’s husky vocal tones, at least in certain passages, but those influences, along with Mitchell and Beck’s creative musicality and song-craft, mesh extremely well.

Classic It Bites sounds and guitar/ keyboard instrumental runs also make an appearance or three. ‘Flag’ and ‘Cartoon Graveyard’ hearken back to the band’s brand of punchy power-pop prog.

But what separates Map of the World form the melodic prog pack is the light and shade on display.
The title track is a wonderfully bright, melodic piece with little bursts of those keyboard and guitar runs, ‘Clocks’ is a prog-waltz (complete with merry-go-round touches from Beck’s keyboards on the choruses) and then there is ‘The Last Escape.’

Beautiful in its simplicity, ‘The Last Escape’ features what might be John Mitchell’s best vocal to date, sung over Beck’s piano before full band and fuller sound are introduced. Yet the song remains uncluttered throughout, is genuinely tender in places and features an almost understated but perfectly placed solo from Mitchell.

Map of the World will be hailed by those that still champion the name and the band as another great chapter in the It Bites story, but for others that story ended in 1990…

In the summer of that year, after the creative forces of original It Bites singer and guitarist Francis Dunnery and John Beck became creative clashes, Dunnery parted company with the band after three exceptional studio albums and a live album issued post-split (followed by a couple of much later archive live releases).

Like Beck, Dunnery was an integral part of the It Bites sound but he had such a distinct, inimitable lead vocal and interesting guitar style (ranging from melodic-pop melody lines and emotive solos to ultra-fast jazz-fusion licks) that it could and can only be a different beast – make that band – without him.

The Tall Ships was a very good album, but having clearly tried to emulate the style of classic It Bites (to the extent of almost being a tribute to the original) it was interesting to hear the band hint last year that the follow-up would see them stretching much further and bringing more to the table than the trademark It Bites sounds and arrangements.

That they have – and then some – but with only John Beck and Bob Dalton remaining from the original line-up and John Mitchell now bringing his own influences and style very much to the fore, Map of the Past is as much a follow up to Kino’s Picture as it is a new It Bites album (Dalton was also a member of Kino, joining post-Picture).

But even that doesn’t paint a fair Picture, because this particular release and this particular line-up deserve to be judged on their own merits and not be compared to any musical maps of the band members’ past.


The following audio tracks are presented to accompany the above review and promote the work of the artists. No infringement of copyright is intended.