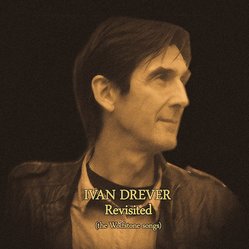 ​Folk music has quite the musical history and a community spirit about it – in short, while it will never scare the bejesus out of the Beyoncés and Biebers of this world as regards chart success and arena tours there will always be an audience for the genre.

Truth be told however FabricationsHQ and this music fan/ writer are not exactly the folksters who live on the hill where guitars, fiddles, pipes, accordions and whistles play and sing in perfect (and sometime imperfect) harmony.
In fact quite the opposite – the folk brigade of hey nonny nonners or those who sing about great disasters at sea (the truth of the matter is usually a singer in an Aran sweater with a finger in his ear whose most "dangerous waters" episode was dropping his harmonica down the toilet bowl) are about as far removed musically from FabricationsHQ as those Beyoncé and Bieber characters mentioned earlier.

But when traditional meets contemporary as crafted by the likes of one of Scotland’s leading singer songwriters Dougie MacLean... or instrumental airs and reels as performed by Aly Bain & Phil Cunningham... or the folk ‘n’ roll of Wolfstone… that stirs the musical biorhythms and the Celtic blood.

Ivan Drever’s latest solo album, Revisited (featuring acoustic reinterpretations of some of Wolfstone's finest moments), was extremely well received; it’s no surprise therefore that Drever is currently recording Revisited II.
While the sequel will include a number of Wolfstone tunes the emphasis this time around is on featuring some of Ivan Drever’s earlier, pre-Wolfstone songs along with a couple of tunes from other band projects.

In February, following a January Celtic Connections appearance, Ivan Drever played three dates in what was jokingly referred to as the "Dumfries and Galloway world tour," part of a small set of Scottish dates that also saw the musician play in Edinburgh, Kirkcaldy and Hawick.

FabricationsHQ went on the road with Ivan Drever for two of the D&G dates, in Stranraer and Dumfries.
As it turned out both dates were significant in terms of the events themselves and for the sighting of a couple of ear catching D&G singer songwriter talents. 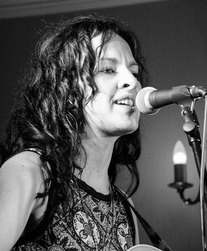 The Stranraer date in the music room of The Grapes live music bar turned out to be a sell-out crowd for a good cause; Stranraer Lowland Gathering chairman Ronnie Brown generated additional interest for the gig by having it double as a fund raiser for that very body – the Stranraer Lowland Gathering is a community led organisation set up to host, and keep, pipe band competition in the town.
(it’s not all about rock 'n' roll, kids; bringing live music events back to towns and communities across the entire UK, no matter the genre, should be applauded, supported and championed).

Supporting Ivan Drever at The Grapes was local singer songwriter Angela Whitelaw, more used to fronting a full band and playing her first large crowd solo set.
​
After a nerve settling couple of numbers it was obvious this is a singer with not just a voice (carrying both a contemporary phrasing style a la Suzanne Vega and a purer Joni Mitchell vocality) but an ability to write intelligent and thought provoking lyrics on subjects as dramatically different, and difficult, as adultery ('The Phoenix and the Wolfpack') and dementia (the touching 'I Remember Me'), over simple but highly effective pop-folk refrains.

Both 'I Remember Me' and 'Phoenix and the Wolfpack' feature on Angela Whitelaw’s current four-track EP release; a second EP is planned for later in the year.

As much as it’s a pleasure to hear and help support talented artists it’s also a pleasure to be in the company of like-minded individuals who turn musical passion in to musical promotion.
Daniel Gillespie, a young man who is as likely to talk to you about his fondness for the music of Ivan Drever as he is to be seen wearing an AC/DC t-shirt, was responsible for setting up Drever’s three-stop tour of Dumfries and Galloway while also organising Spokefest 2 at The Venue in Dumfries.

While not a sell-out as had been The Grapes gig the night before, Spokefest 2 presented a great opportunity to enjoy another Ivan Drever set as well as performances from five acts local to the area.

Blues standards and twelve bar rhythm and blues from The Strumsum Blues Band and The Wise Guys featured as did a high-energy opening set from Daz McCormick, a singer who not so much plays his acoustic guitar as punishes it in a manner akin to Lindsey Buckingham in full-on, 'Big Love' live style
(Buckingham is also, clearly, a musical influence on young Mr McCormick).

By contrast the delicate and high-voiced vocal of Darcy DaSilva (accompanied by whistle and fiddle) produced an equally delicate and very traditional set while the acoustic folk-blues delivered by Lewis Fergusson was a genuine sit up and take notice highlight.
​
Each of Fergusson’s songs had something to offer, from the floating, melancholic notes of 'Nothing To Be' to the country-folk blues of 'The Bore Tide' which, for this listener, instantly conjured up images of Riverboats and the Mississippi Gulf Coast.

Lewis Fergusson’s second EP, A Flower in the Dark, also helps show why his songs have been heard on BBC Radio Scotland, BBC Radio Cambridgeshire and South West Sound Radio (Fergusson has also performed at The Cambridge Folk Festival, The Wickerman Festival, in Holyrood Castle and on STV Glasgow).
​The music business is… well, it isn’t, quite frankly – what we have now is an entertainment and marketing business where music is made to watch and mediocrity sells for maximum profit.

But that’s never been the goal for the majority of those plying their singer songwriter trade in the Celtic and folk-blues genres where, for generations, it’s been about the music and the sharing and playing of that
music – and not a folk is given for what is top of the charts or who this year’s manufactured star will be.