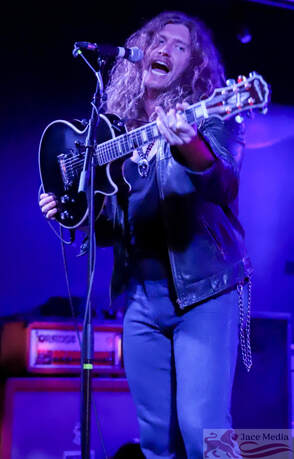 In among a throng to see a three-band line-up of live music on the 29th of February (an every four years date that not everyone can claim to have seen a gig on) seems like a very long time ago, considering what has happened the short time since.

Pre Corona pandemic and before many such gigs were being pulled or ongoing tours cancelled, this particular triple bill at Glasgow’s Garage G2 offered up a genuine value-for-money package, especially given it featured two currently hot acts and a local band who are well-known in these here parts.

Salt River Shakedown were the opening act for the night and while they tried their best with what was a fairly sparse sound (they also suffered audibly last G2 time around when they supported Anchor Lane) there were definitely signs of sonic improvement with new front man Griff (the band’s ace card however is guitarist Alek McMillan, who is developing into a fine player).

The most pertinent observation from the band’s set however is they really need concentrate on their original groove rock and roll material (such as set highlights 'Fight or Flight' and 'A Feast For the Wolves') and drop the likes of 'Superstition,' which seemed incongruous for a rock crowd (they didn’t murder Stevie Wonder’s funky masterpiece, but they gave it an ugly kicking).

Next up was Collateral from Kent of whom a great deal has been written over the last year and who seem to be enjoying some serious promotion and consequent attention.
However your reviewer can’t quite see or hear what the fuss is about as Collateral seem to be a hard melodic rock outfit who deliver by the numbers.
The band look and sound the sing-a-long chorus and "whoa-oh" part with the hair, leather and front man Angelo Tristan, but it all sounded too formulaic, with chunks of Bon Jovi and other stadia filling rock acts in the mix.

The 30 year old from Wisconsin fronts a classic power trio and his current rhythm section of bassist Baron Fox and drummer Dennis Holm are very capable indeed.
But there is no question the showcase is Nichols' earthy, soulful vocals and his fiery guitar work – this is souped-up heavy blues and JJN certainly knows his way about the fretboard of 'Old Glory' (his signature/ custom P90 Les Paul Epiphone), while employing an unusual playing style without a plectrum (a la Richie Kotzen).

​​Whilst there is clear lineage to 70s power trios with the Jared James Nichols Band there is a modern slant to the music and style (there are echoes of Pat Travers and Ted Nugent in both the line-up and hook-laden choruses but with some added complex arrangements). 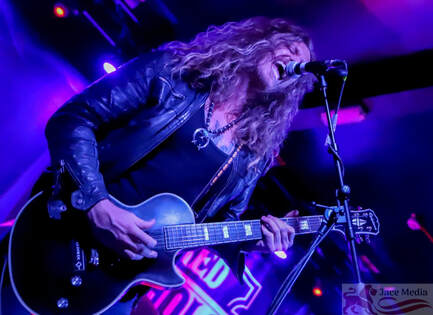 JJN’s live show regularly includes interpretations of classic number such as 'Mississippi Queen,' 'Foxy Lady' and 'Funk #49' with the G2 audience treated to a particularly ferocious version of the former at the end of the set.

An hour or so before that Mississippi raucous roll however JJN kicked off in fine, foot-stomping fashion via 'Last Chance' and 'End of Time' before introducing his latest single, the southern slanted 'You Threw Me To the Wolves.'

Previous single 'Nails in My Coffin' also featured (coming over well despite lowering the tempo) but it was songs such as the weightier 'Hardwired to Love You' and bluesier 'Now or Never' that went down a treat with the Glasgow crowd (one of JJN’s strongest numbers, the boogie driven 'Can you Feel It,' received a particularly rousing reception from the increasingly appreciative Glaswegian audience).

Jared James Nichols, live, is a force of nature.
He is all over the stage throwing shapes, tossing around the Plant-esque hair and interacting with the audience whilst laying down some killer guitar lines and providing lead vocals.
He is also genuinely a nice guy who has been paying his blues dues, now seeing some headline action having worked the festival circuit and entertaining the crowds with some notable support gigs over the last couple of years.

Whilst his recorded output is certainly good (last studio album Black Magic is a boisterous blues rockin’ affair), it’s the live performances that will almost certainly make or break JJN.

Having released the three-track Live at The Viper Room back in 2012 (which garnered him some attention) and with two studio albums and an EP under his belt, now might be the opportune time to deliver a new, full length live album to help reinforce those "big stage" credentials.