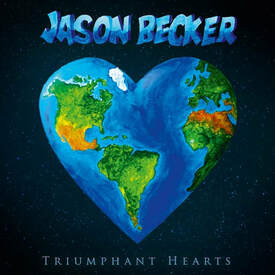 2018's musical comeback, certainly in vocal terms, was Steve Perry’s return via his cathartic and highly personal statement Traces but as regards the music story of the year, or the musical return most would have thought impossible, that award goes to Jason Becker and Triumphant Hearts.

Jason Becker, one-time rock guitar virtuoso, was destined for true six-string superstardom back in the hair and fret shredding day until late 1989 and a diagnoses of Amyotrophic Lateral Sclerosis (also known as Lou Gehrig’s Disease).

Prior to that shocking diagnosis Jason Becker had risen from child guitar prodigy to teenage prominence as one half of rock guitar duo Cacophony, with friend Marty Friedman.

​In 1989 the then 19-year-old Jason Becker became guitarist for David Lee Roth, filling the rather large shoes of Steve Vai; Becker recorded for Roth’s album A Little Ain’t Enough through 1990 and was geared to tour the album when a nagging pain in his leg was diagnosed as the onset of Amyotrophic Lateral Sclerosis.

The life expectancy given was three to five years. That was twenty-nine years ago.

As the disease took hold Jason Becker lost the ability to walk, talk and breathe on his own but as Triumphant Hearts plays musical testament to, he never lost his will to live or his passion for creating and composing music.

Communicating through a series of eye movements with a system developed by his father, Jason Becker started to spell out words as well as musical notes and chords.
His compositions, arrangements and musical thoughts were then entered in to computer, edited under his guidance, and produced and generated as sheet music for the musicians that would bring Jason Becker’s musical vision to recorded life.

Triumphant Hearts showcases not just Jason Becker’s compositional skills for rock or guitar (his fast, fluid and note-deft playing, recorded in the 80s and early 90s, also features on a number of the songs) but his fondness and understanding of the classical form and orchestral arrangement.

If any were in doubt or felt they had a whammy bar handle on how or what a new Jason Becker album would sound like those doubts or pre-conceived notions are erased over the first four compositions, starting with the instrumental title piece, a classically framed and emotive ballad featuring the striking violin play of Glauco Bertagnin, complementary guitar lines from Becker’s ever-close friend, Marty Friedman and Friedman’s wife, cellist Hiyori Okuda.

More moving is the seven and a half minute gospel choir meets soul-rock ballad 'Hold On to Love,' featuring a perfectly pitched (in both senses) vocal from Codany Holiday who raises his game (and vocal highs), inspired by Jason Becker’s spirit, passion, composition and lyrics ("I can’t speak, I can’t play, but this flesh has much more to say...")
'Hold On To Love' is followed by two orchestrally scored instrumentals, the delicately swaying 'Fantasy Weaver,' featuring ukulele virtuoso Jake Shimabukuro, and eastern flavoured 'Once Upon a Melody;' the latter features Jason Becker’s fretboard fingerprints from back-in-the-day, hence the title.

It’s not until 'We Are One' featuring Steve Knight (and more of Jason Becker’s guitar) that the rock starts to roll, but here the rock is spelt Funk (with a dirty big capital F) and the roll is a big, chunky groove with brass accentuations.

Sitting in the centre of the album is an acoustic cover of 'Blowin’ in the Wind' featuring a perfectly weighted, pensive and reflective vocal form Gary Rosenberg.
The Bob Dylan number is followed by the musically complementary instrumental 'River of Longing' featuring Joe Satriani, Aleks Sever, Guthrie Govan and Steve Morse.

'River of Longing' is then reprised, featuring Trevor Rabin’s dextrous guitar talents, before Jason Becker takes centre 1990 stage on two previously unreleased, vocal-less outtakes from the A Little Ain’t Enough sessions.
Becker gets his Eddie Van Halen on for the VH sounding 'Taking Me Back' before shredding the blues on 'Tell Me No Lies.'

Triumphant Hearts comes to a triumphant conclusion with a short audio capture of children’s laughter and a young Jason Becker, from some four-and-half decades past, proclaiming "You Do It," as if saying act on your hopes and aspirations now, because none of us can predict what fate and the future has in store.

"Some people feel sorry for me and I understand that. I really feel lucky though. I don’t miss playing guitar anymore. I’m sure that’s out of necessity, but I am grateful for so much more. I am surrounded by loving people, and I can still make music."